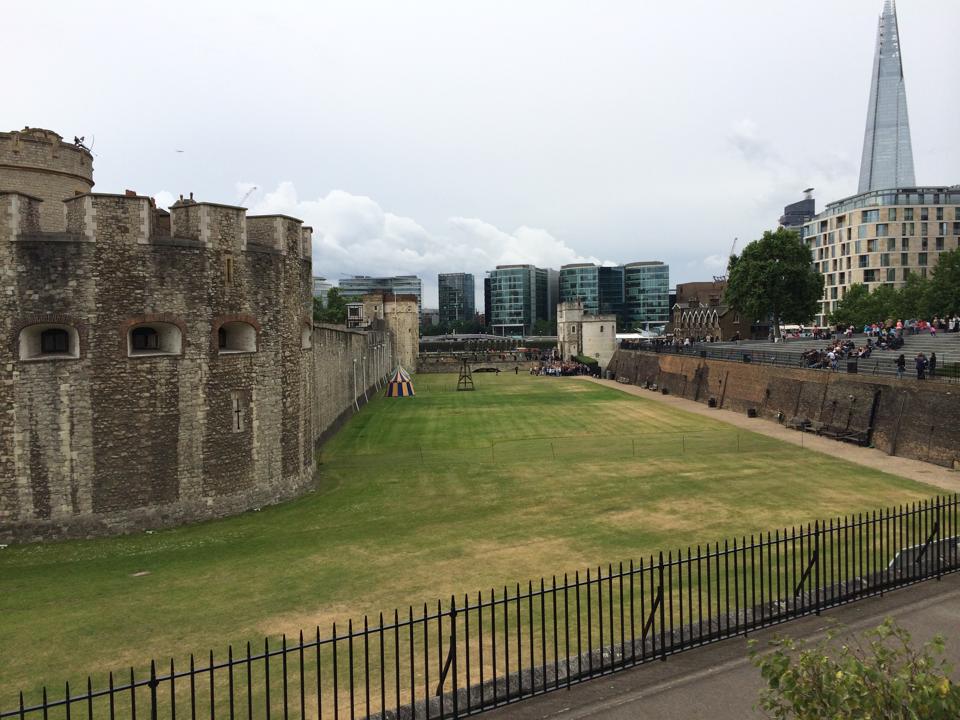 The moat at the Tower of London juxtaposed with modern architecture. Photo by Jasmine Mulliken, June 2014.

Referenced in six stories, London consistently carries connotations of economic dependence or opportunity for the Dubliners who were, at the dawn of the twentieth century, experiencing rather dismal prospects in the marketplace. In fact, much of the paralysis depicted in the collection stems from characters’ vocational or financial challenges. As Joseph Kelly very clearly puts it, “First and foremost, paralysis was economic” (17).  Kelly points to the essay “Fenianism” in which Joyce claims Ireland consists of

“a population which diminishes year by year with mathematical regularity, [through] the uninterrupted emigration to the United States or Europe of Irishmen for whom the economic and intellectual conditions of their native land are unbearable.” (CW 190)

“Little Chandler’s thoughts ever since lunch-time had been of his meeting with Gallaher, of Gallaher’s invitation and of the great city London where Gallaher lived.” (70)

As we learn in Ulysses, Gallaher works for a “Chapelizod boss” (7.732), another Irish emigrant, most likely the Chapelizod-born  Alfred Harmsworth who started London’s Daily Mail in 1894 and Daily Mirror  in 1903.  As “a brilliant figure on the London Press” (71), Gallaher is the epitome of success, even “greatness” (72) in Little Chandler’s eyes (“Ignatius Gallaher on the London Press!” [72].) And if only Little Chandler could write some verse about the Dublin tramps at nightfall, “[p]erhaps Gallaher might be able to get it into some London paper for him” (73); if only he could accentuate the more “Irish-looking” (74) parts of his name, perhaps he too could be considered among the London literary circles. In other words, Little Chandler considers his Irishness artistic capital in an English economy.

Once Little Chandler finishes his trek from office to pub (“Every step brought him nearer to London” [73]),the two men discuss  “the old gang” (75). O’Hara, who still lives in Dublin has “gone to the dogs” while Hogan, who recently visited “London and he seemed to be very flush” (76), is on the Land Commission, an agency that Don Gifford notes was a “notorious porkbarrel” (70). Gifford explains that “[t]he Land Purchase Bills of 1891, 1896, and 1903 provided for the tenants’ purchase of their farms from the landlords through the backing of British credit.” So even though the Irish farmers were getting their land, they were enabled to do so by the British economy. In turn, the Irish Hogan, though still living in Ireland, is”very flush” because his vocation involves British financial backing.

Soon, Gallaher encourages Little Chandler to travel outside of Ireland, and suggests he “[g]o to London or Paris” (76), and as they talk, Little Chandler becomes”disillusioned” by Gallaher’s new manner, but imagines it’s only because of ” living in London amid the bustle and competition of the Press  (77).” In other words, living in London makes up for the “something vulgar in his friend which he had not observed before.” Little Chandler is even envious of the worldliness that has created the new vulgarity in Gallaher. He begins appropriating London as another “moral” city on a level with Dublin, considering himself and his city, wishfully, in league with Gallaher and London against places like Paris, which he sees as immoral. Gallaher must correct him, though, insisting,

“–London! said Ignatius Gallaher. It’s six of one and half-a-dozen of the other. You ask Hogan, my boy. I showed him a bit about London when he was over there. He’d open your eye….” (77)

As uncomfortable as London’ potential immorality makes him, Little Chandler still dreams of following Gallaher. All his frustration pours out as at the end of the story as, holding his baby and questioning his marriage, he broods:

“A dull resentment against his life awoke within him. Could he not escape from his little house? Was it too late for him to try to live bravely like Gallaher? Could he go to London? There was the furniture still to be paid for.” (83)

Ultimately, it’s his debt that holds him back from leaving his despised home even at the same time that the London literary industry represents a chance to escape.

London functions somewhat similarly in the other four stories, though it’s never as prominent as in “The Little Cloud.” In “A Boarding House,” London is mentioned only briefly as the home city of one of the guests: “one of the music-hall artistes, a little blond Londoner, had made a rather free allusion to Polly” (68). The free allusion of the Londoner anticipates the seedier side of London that Gallaher reveals to Little Chandler in the next story.

The city is alluded to again briefly in “Counterparts” as Farrington is reaching his breaking point in Mulligan’s. The woman he is so fascinated by speaks to him in a London accent before leaving and never looking back:

“She glanced at him once or twice and, when the party was leaving the room, she brushed against his chair and said “O, pardon!” in a London accent. He watched her leave the room in the hope that she would look back at him, but he was disappointed. He cursed his want of money and cursed all the rounds he had stood, particularly all the whiskies and Apolinaris which he had stood to Weathers. If there was one thing that he hated it was a sponge. He was so angry that he lost count of the conversation of his friends.” (95)

Part of Farrington’s frustration stems from the rejection of this exotic Londoner, and it’s just after this exchange that he channels his rage into an arm-wrestling match, which he loses. The rejection of the London woman who is apparently out of his league sets in motion Farrington’s downward spiral of inadequacy and inferiority.

In “Grace,” Tom Kernan makes his living by selling tea for the London-based Pulbrook, Robertson, and Company. Although we don’t learn these specifics until Ulysses, enough of the address on his office is given to reveal that whatever company it is, it’s based in London:

“Modern business methods had spared him only so far as to allow him a little office in Crowe Street, on the window blind of which was written the name of his firm with the address—London, E. C. On the mantelpiece of this little office a little leaden battalion of canisters was drawn up and on the table before the window stood four or five china bowls which were usually half full of a black liquid. From these bowls Mr. Kernan tasted tea. He took a mouthful, drew it up, saturated his palate with it and then spat it forth into the grate. Then he paused to judge.” (154)

Again, the livelihood of this Dubliner is tied to industry located in England.

“A Mother” and “The Dead” reference London in the context of its music industry. While in “A Mother,” the Londoner Madame Glynn is described as “[a]n unknown solitary woman with a pale face” (143) and not a very good singer, Bartell D’Arcy in “The Dead” insists that London, along with Paris and Milan, is where all the good singers can be found (199). Though these references may appear to argue opposite perspectives on the London music scene, it’s interesting to note that Madam Glynn is an unknown among the rather inexperienced performers, understudies, and bronze-medalists of Mr. Holohan’s rather patched-together show. Kathleen Kearney has no knowledge of her whatsoever:

“–I wonder where did they dig her up, said Kathleen to Miss Healy. I’m sure I never heard of her.

Miss Healy had to smile. Mr. Holohan limped into the dressing-room at that moment and the two young ladies asked him who was the unknown woman. Mr. Holohan said that she was Madam Glynn from London.” (143)

Essentially, Madam Glynn must perform in Dublin because, ostensibly, she cannot perform in London. Like Little Chandler, she lacks the talent or economic means to break onto the London scene. Caruso, on the other hand, whose talent D’Arcy extols in “The Dead,” had toured in London:

–Oh, well, said Mr. Bartell D’Arcy, I presume there are as good singers today as there were then.

–Where are they? asked Mr. Browne defiantly.

–In London, Paris, Milan, said Mr. Bartell D’Arcy warmly. I suppose Caruso, for example, is quite as good, if not better than any of the men you have mentioned.” (199)

Overall, the role London plays as a reference in Dubliners tends to be one of economic privilege in opposition to a struggling Irish middle class. Some of the Dubliners capitalize on British economic opportunities while others find the London market hopelessly impenetrable.