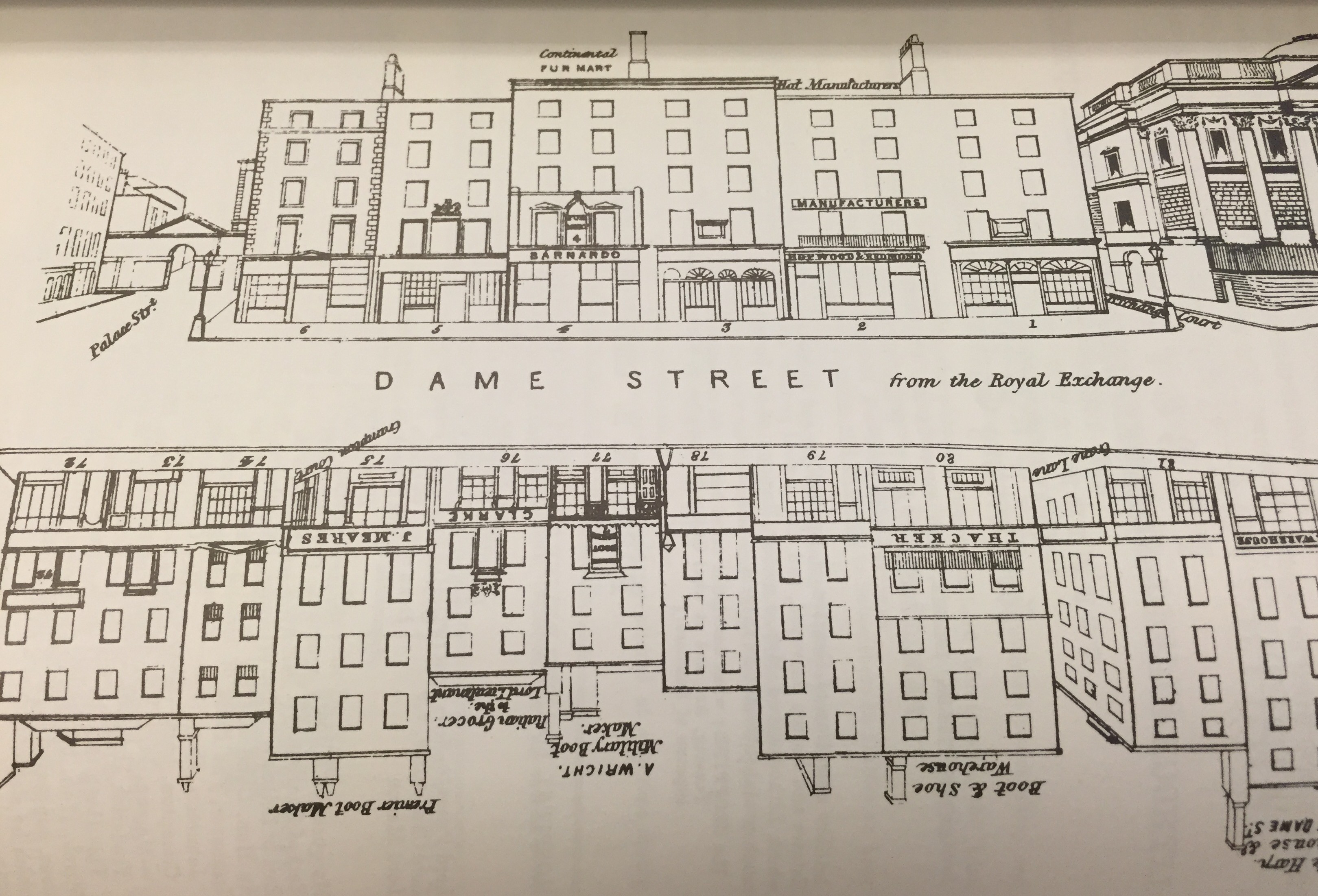 Diagram of Dame Street from Henry Shaw’s The Dublin Pictorial Guide & Directory of 1850. Bewley’s is located at 6 Dame Street, in the upper left of the image, at the intersection of Palace Street.

At the end of “A Little Cloud,” Chandler sits “in a room off the hall, holding a child in his arms” (82). He has just returned home, rather depressed, from an anticlimactic meeting with an old friend who is visiting Dublin after having lived abroad for the past eight years. Gallaher has filled Chandler’s mind with stories of Berlin, Paris, London, and all the romanticism of not-Dublin, and in his “revery” (74), Chandler has forgotten to do his domestic duty of picking up coffee for his wife Annie. So while he holds his baby, his wife goes to the corner to buy tea instead:

“It was a quarter to nine. Little Chandler had come home late for tea and, moreover, he had forgotten to bring Annie home the parcel of coffee from Bewley’s…She said she would do without any tea but when it came near the time at which the shop at the corner closed she decided to go out herself for a quarter of a pound of tea and two pounds of sugar” (82).

The reference to Bewley’s, though seemingly innocuous, carries connotations in tandem with the ongoing Ireland-England dichotomy in the story. One of the persistent themes in Dubliners, and in “A Little Cloud” especially, is Ireland’s dependence upon and subordinance to the yoke of English economy. One of Chandler’s dreams, for example, is to become a poet, but he forms his poetic identity on the basis of English critics whom he imagines would “recognise him as one of the Celtic school by reason of the melancholy tone of his poems” (74). He has essentially conceded his Irishness as a kind of commodity for English consumption and critique. His friend’s emigration to England where he has become successful in the London Press weighs on Chandler, and he views his own life with “dull resentment.” He feels trapped by the passionless, hate-filled eyes of his wife and his mean little house (83).

Although it is unclear who operates the corner shop where Annie goes for the tea, it is very clear who runs Bewley’s. According to the business’s history, Samuel Bewley established his tea and coffee business in 1835, when he “dared to break the East India Company’s monopoly by importing 2,099 chests of tea on board the clipper ship The Hellas, the first ship chartered directly from Canton in China to Dublin.” The family sustained the business, opening shops in Dublin, including one in Dame Street, which Gifford notes would be the most likely location implied in the story as it is situated along Chandler’s route from office to bar. It would have been just a few steps away from City Hall, where Chandler would be turning into Dame Street from Parliament Street after crossing Grattan Bridge.

As an Irish company that challenged a British monopoly, the reference to Bewley’s infuses a subtle rebellion against the seemingly insurmountable English economic oppression of Ireland that fills the pages of the story. Nevertheless, Chandler simply forgets to make this stop, implicating him in his own imprisonment to the British capitalism that he feels has trapped him.

Tagged with: a little cloud