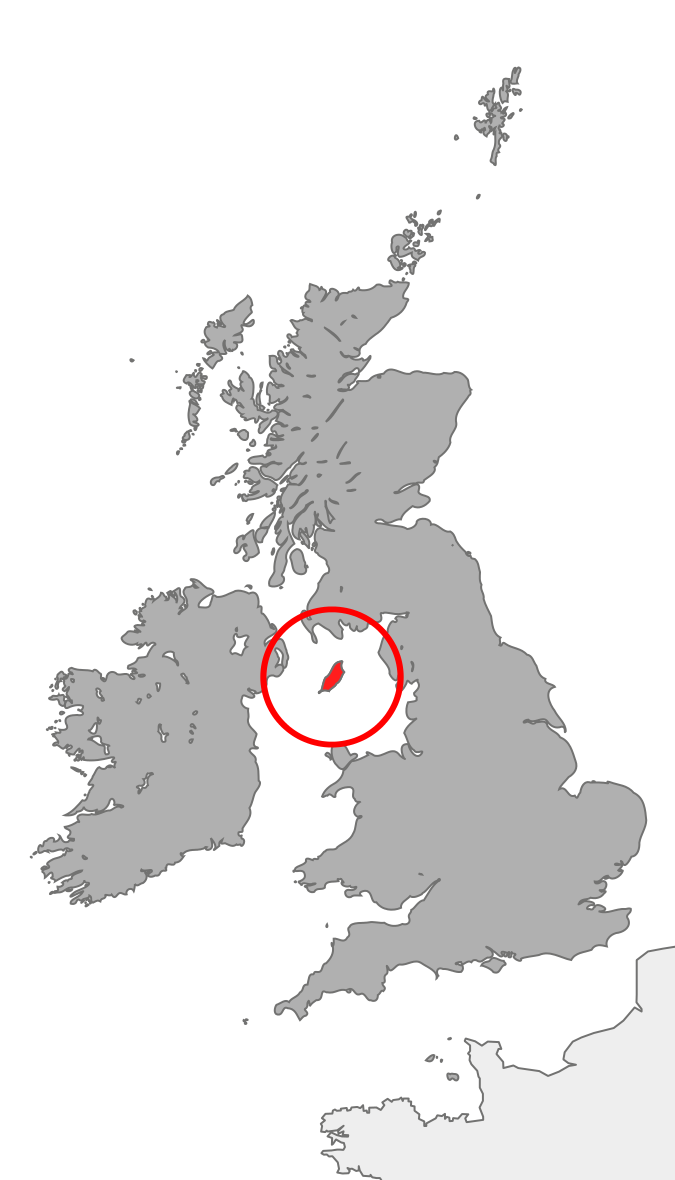 Map showing the location of the Isle of Man.
“British Isles Isle of Man” by Cnbrb – Own work. Licensed under Public Domain via Wikimedia Commons.

The Isle of Man is an island located in the Irish Sea between Ireland on the west and England and Scotland on the east. Like Ireland, it has Celtic and Gaelic origins and its government was influenced by Viking conquests. The Isle of Man boasts the “oldest continuous parliament in the world.” One of the Tynwald’s houses is called the House of Keys, which is the source of a play on words for Bloom in Ulysses.  It also appears in two stories in Dubliners: “The Boarding House” and “A Little Cloud.”

The first mention of the Isle, in “The Boarding House,” is in relation to the origin of some of the types of tourists that tend to stay at Mrs. Mooney’s establishment:

“Mrs. Mooney, who had taken what remained of her money out of the butcher business and set up a boarding house in Hardwicke Street, was a big imposing woman. Her house had a floating population made up of tourists from Liverpool and the Isle of Man and, occasionally, artistes from the music halls” (62).

Don Gifford suggests in his annotations that the reference implies the boarding house guests are from an “extraordinarily rowdy citizenry” (Gifford 63). Given the location of the boarding house in Hardwicke Street and description of Mrs. Mooney’s necessary demeanor with her residents (“She governed her house cunningly and firmly, knew when to give credit, when to be stern and when to let things pass. All the resident young men spoke of her as The Madam.”), Gifford’s suggestion is probably correct. In this story, then, the Isle of Man implies a certain raucousness that could be a danger to someone less worldly-wise than any member of the Mooney clan.

Little Chandler, on the other hand, is indeed less worldly-wise. In “A Little Cloud,” he is scoffed at by Gallaher for his travel destinations, which amount to the Isle of Man:

“–Tommy, he said, I see you haven’t changed an atom. You’re the very same serious person that used to lecture me on Sunday mornings when I had a sore head and a fur on my tongue. You’d want to knock about a bit in the world. Have you never been anywhere even for a trip?

–I’ve been to the Isle of Man, said Little Chandler.

To Gallaher, who has been living in London for the past eight years, the Isle of Man would seem to be pretty bland and uninteresting, and about as unworldly as you can get. Given these two references, it would seem, in fact, that it makes more sense for someone from the Isle of Man to visit Dublin rather than the other way around.

That the reference appears in these two consecutive stories does invite a comparison between its implications in each case. On one hand it’s the origin of rowdiness, something to be cautious of, while on the other, it’s boring and droll, far less interesting perhaps than Dublin itself. That it is so insignificant in “A Little Cloud” suggests that the ruffians that inhabit the boarding house aren’t quite as tough to deal with as the Mrs.-Mooney-esque narrator would have us believe. And at the same time, the roughness of the Manx citizenry in “The Boarding House” might suggest that Gallaher is just as pompous and boastful as he appears to be; he shrugs off the “extraordinarily rowdy citizenry” as tame compared to the company he’s used to keeping in places like London and Paris. Of  Paris, Gallaher exclaims, “Hot stuff! Not for a pious chap like you, Tommy” (76). And when Chandler asks whether the city is immoral, Gallaher suggests going to one of its students’ balls: “That’s lively, if you like, when the cocottes begin to let themselves loose” (77). Based on his description of these cocottes, it may well be that Polly Mooney, quite able to handle the rough men of her mother’s establishment, could manage just fine in a place like Paris or even London, which Gallaher says is just as debauched as Paris. Instead, she’s kept in Dublin, by her mother, to marry Bob Doran, another kind of Chandler or Eveline. They are all trapped in the stasis of Ireland by the economics of familial duty. (Eveline is kept in place by her mother’s memory and her father, whom she supports; and Little Chandler, though he wants to travel like Gallaher or even just write poetry for an English publisher, is kept in place by his child and wife and the furniture he bought “on the hire system” [83].)

Incidentally, the ship Frank boards at the end of “Eveline,” would have most likely sailed first to the Isle of Man before going on to Liverpool where the ship to Buenos Ayres would have sailed from. The familial economics in each of these stories corresponds with the characters’, and Ireland’s, dependence on the British economy. Likewise, the Isle of Man is, although technically self-governing, a British Crown dependency. The Isle of Man, and its status as a Crown dependency, could very well represent the economic paradox that keeps the characters of Dubliners tied to Ireland through their livelihood’s dependence on  a market controlled by England, a country that taunts them with the mirage of opportunity if they could only get there.

Tagged with: a little cloud • the boarding house