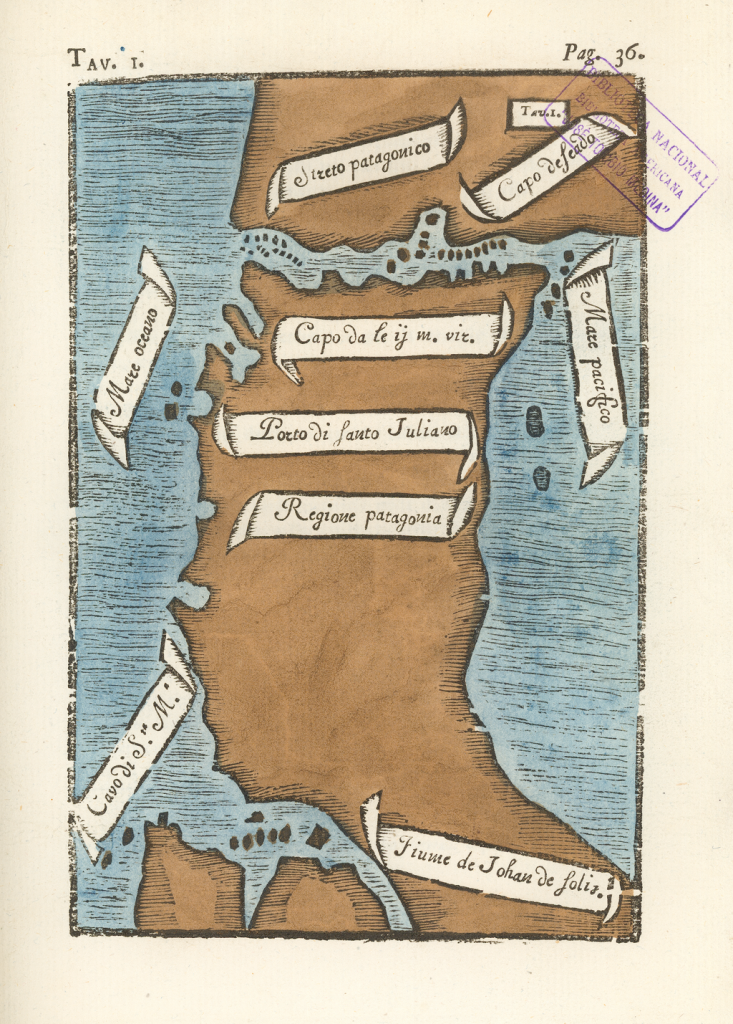 Although the reference in “Eveline” is to a people rather than a place, like the title of Dubliners, “Patagonians” elicits an identity fused to geography and thus presents us a geographic reference. The term appears amid a list of places as we learn about Frank’s travels to exotic lands:

He had tales of distant countries. He had started as a deck boy at a pound a month on a ship of the Allan Line going out to Canada. He told her the names of the ships he had been on and the names of the different services. He had sailed through the Straits of Magellan and he told her stories of the terrible Patagonians. He had fallen on his feet in Buenos Ayres, he said, and had come over to the old country just for a holiday.

The Patagonians he refers to would have been native inhabitants of the area of Patagonia in South America. The region name first appears on a map which was included in Antonio Pigafetta’s chronicle of Ferdinand Magellan’s 1520 expedition through the Straits of Magellan. The Journal of Magellan’s Voyage describes the native inhabitants of this land, spanning parts of the southern regions of Chile and Argentina, as Patagonians. In fact, if Dubliners are named after their locale, then Patagonia is named after its people.

Accounts differ as to the origin of the label “Patagonian.” It was initially thought that the name derived from a word meaning “big feet,” but more substantial research suggests that Magellan first applied the name Patagão as a derivation of Patagón, the name of a character in a text he was likely to have read. In the story Primaleon of Greece, Patagón is a giant from Paphlagonia, an area located at the top of present-day Turkey. After terrorizing  a “remote island” he is slain by Primaleon, the hero of the chivalry tale. Miguel Armando Doura outlines the rationale for this interpretation of the name in his 2011 article “Acerca del Topónimo Patagonia, una Nueva Hipótesis de Sugnésis.” (Incidentally, Stephen Mitchell explains that Paphlagonia may have also been the birthplace of Homer.)

“Regional map of Asia Minor in the 2nd Century BC” from Wikimedia Commons.

The etymology of the name is also discussed in Bruce Chatwin’s 1977 travelogue In Patagonia.

Whether or not readers see the etymology of this place name as significant to the story of “Eveline,” what is certain is that Joyce’s reference to the “terrible Patagonians” imbues Frank with a kind of adventurous and exotic mythos. But if Frank is a modern Magellan, that makes him as much a colonizer as an explorer, and those implications are important to how we view Frank in the story and how we view the notion of emigration in “Eveline” and Dubliners as a whole. Like in all of Joyce’s work, the tension between movement and paralysis is very much tied to the politics of deciding between staying in Ireland to wrest it away from its colonizers or escaping its yoke and starting fresh in a progressive place offering more opportunity. But in typical Joycean fashion the latter option folds back in on itself, threatening to make the emigrant another colonizer, thus perpetuating the very circumstances that necessitate the escape. It is no wonder that Eveline is frozen as she tries to decide whether or not to accompany Frank into a new life. Could she sail to Buenos Ayres and perpetuate the history of the European “explorer” in the Americas? Even if the question doesn’t cross her mind, it’s one worth considering as one of Joyce’s politically infused toponymical clues.