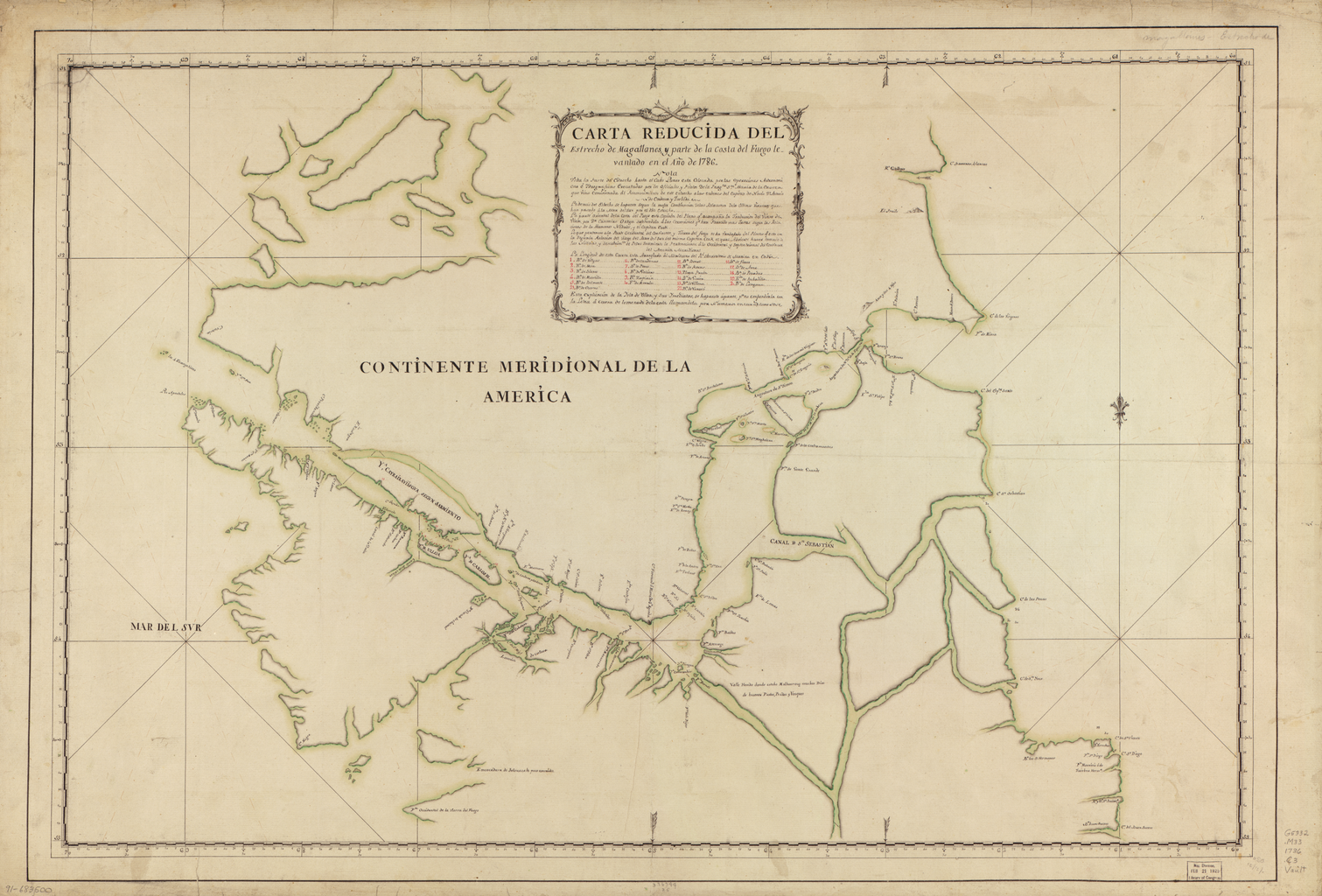 “Map of the Straits of Magellan and Part of the Land of Fire, Prepared in 1786” from Antonio de Córdoba’s expedition, the first scientific mapping of the region. Available at World Digital Library: http://www.wdl.org/en/item/52/

One of several references that expand the psychological geography of Dubliners beyond the city’s borders, the Straits of Magellan infuse James Joyce’s realist urban montage with hints of unattainable escapism. Frank, Eveline’s sailor sweetheart has travelled the world and fills her head with romantic tales about places like Canada, Buenos Ayres, Patagonia, and the Straits of Magellan:

“He had tales of distant countries. He had started as a deck boy at a pound a month on a ship of the Allan Line going out to Canada. He told her the names of the ships he had been on and the names of the different services. He had sailed through the Straits of Magellan and he told her stories of the terrible Patagonians. He had fallen on his feet in Buenos Ayres, he said, and had come over to the old country just for a holiday. Of course, her father had found out the affair and had forbidden her to have anything to say to him.” (39)

The story revolves around Eveline’s ambivalence concerning running away with Frank and making a new life with him in Buenos Ayres. Doing so would mean leaving her father and her siblings, all of whom have come to depend on her, and the city of Dublin itself, which, for her and the rest of the book’s characters, has an uncomfortably paralyzing effect.

The reference to the Straits of Magellan in particular does more than evoke an exotic locale an ocean away. Situated near the southern tip of South America and weaving through modern-day Chile (touching Argentina at its eastern mouth), the Straits are named after the Spanish explorer Ferdinand Magellan who led an expedition through the waterways in 1520. The journey was chronicled by Antonio Pigafetta in The Journal of Magellan’s Voyage, which includes a very basic map, pictured below. 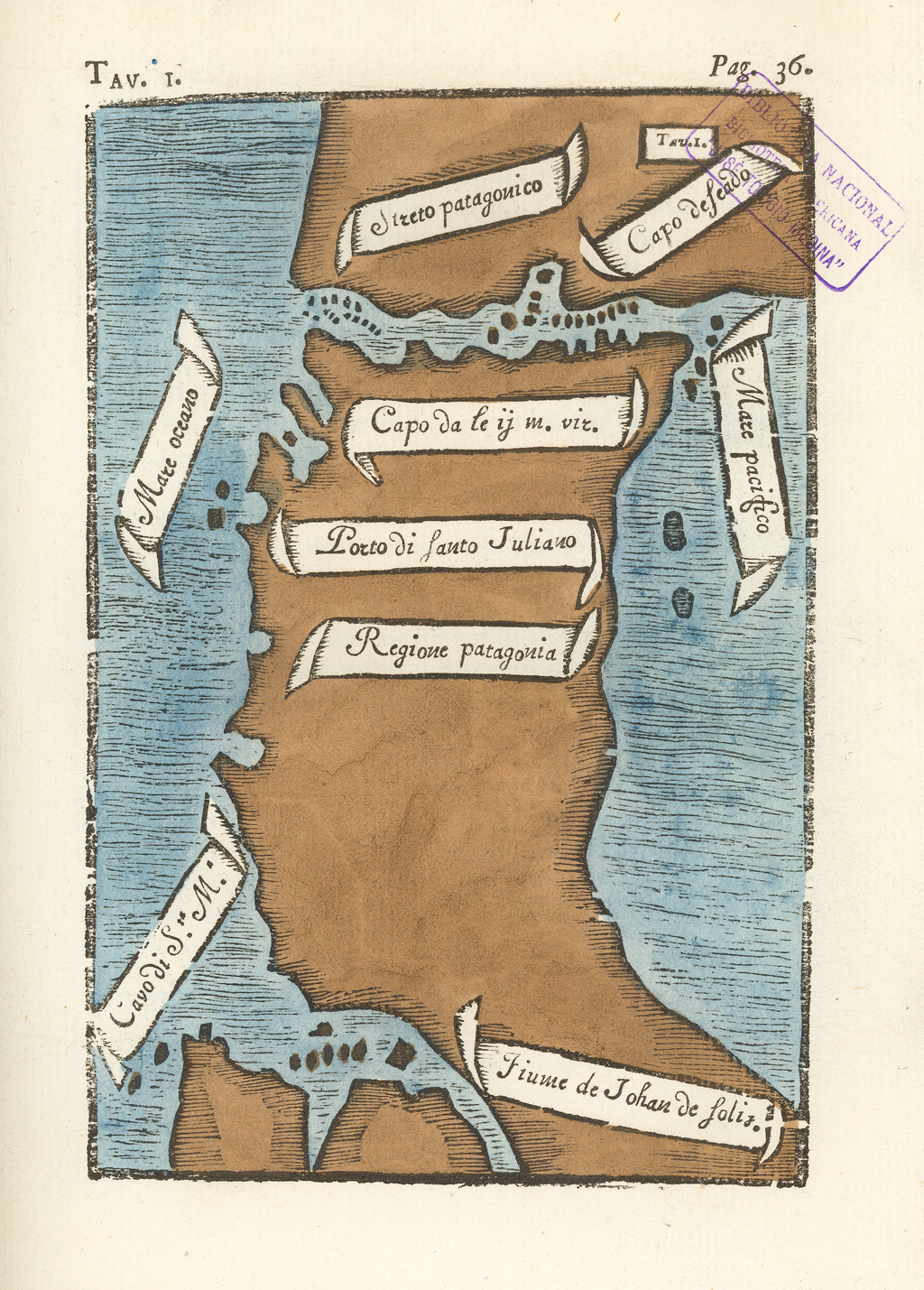 While the meta-reference–the reference to a place that references a person–imbues Eveline’s perceptions of Frank with qualities of exploration and adventure, it also signals to a critical reader that once again we are facing the colonization paradox. Exploration and discovery are exciting, but not to those being explored and discovered (or rather, exploited and displaced). Frank talks about the “terrible Patagonians,” the people native to the lands surrounding the straits. Magellan named the people already living in this place he “discovered” Patagones, meaning “big feet.”

Although there is no evidence that Eveline considers any of this when she ultimately does not board the ship with Frank, it is perhaps still worth considering the implications Joyce sets up within the context of Eveline’s potential “new world” and her inability as a European, especially an Irish European, to embark on that particular expedition. As people under the rule of the world’s largest empire, the Irish would be especially hesitant to implicate themselves with Spanish colonization of South America. And inasmuch as Eveline represents Ireland, she is held fast to the iron of her own shores, unable to become the colonizer. She can’t go with Frank the explorer, Frank the discoverer, Frank the Ferdinand Magellan who battles terrible Patagonians, because she is herself Ireland, the colonized, the oppressed, the paralyzed.

If the earlier geographical references would have been limited to just Canada and Melbourne and Buenos Ayres, the connotations might be more simple: emigration, reinvention, etc. But that Joyce chooses to include the more problematized references to the Straits of Magellan and Patagonians demands a more critical investigation of how place contributes to the post-colonial themes of this story and Dubliners as a whole.

One Response to Straits of Magellan