In “Eveline,” the title character has the chance to leave Dublin with Frank, her love, to his new home in Buenos Ayres. In the story, she weighs the pros and cons of leaving her father and siblings and a hard life of working and caretaking for the exciting unknown of a new country where she will be free to establish a new identity as Frank’s “Poppens.” 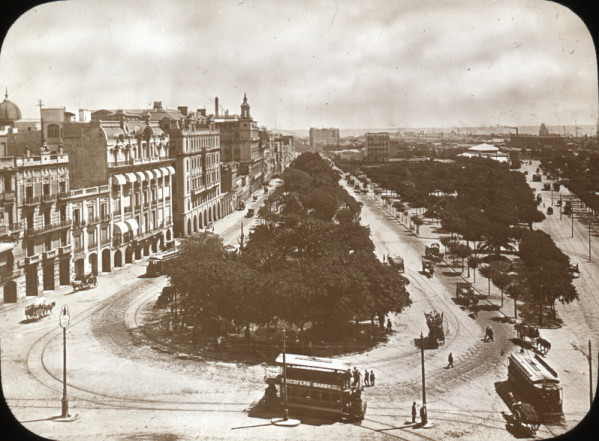 Paseo Colon, Buenos Aires, photographed in 1915. The photo is from a historic lecture booklet with the description “On leaving the docks and driving up into the city, the visitor is at once impressed with the fact that Buenos Aires is not so wholly wrapped up in the purely material as is our commercial center on Lack Michigan. It has broadened along more aesthetic lines and is cultivating the graces, not alone the sordid features, of cosmopolitanism. In the newer parts, the buildings and shaded boulevards and beautifully landscaped parks resemble rather those of Paris; although it is not behind our own big cites in public utilities.” Photo is part of the Visual Instruction Department Lantern Slides Collection at the University of Oregon, http://oregondigital.org/u?/archives,3953

The city, which is the capital of Argentina, is named three times in the story:

“She was to go away with him by the night-boat to be his wife and to live with him in Buenos Ayres where he had a home waiting for her” (38).

“He had fallen on his feet in Buenos Ayres, he said, and had come over to the old country just for a holiday” (39).

“If she went, tomorrow she would be on the sea with Frank, steaming towards Buenos Ayres” (40).

The city is alluring to her, exotic and promising, yet it also stirs up trepidation. When, at the end of the story, she’s faced with boarding the ship, “all the seas of the world tumble[…] about her heart” and she fears that “[Frank] would drown her” (41). She grasps the railing and does not board. She seems to fear not only the uncertainty of a future with Frank but also the expanse of the globe.

Though the common spelling of the city’s name is “Buenos Aires,” Joyce’s alternate spelling draws attention to the etymology of the name, which is derived from Our Lady of Buen Ayre (“fair winds”), which would guide the sailors coming and going from this port city. Not only is the city’s name a fortuitous one for a sailor like Frank, the city itself was also a popular emigration destination for Europeans from 1850 to 1914. According to Sidney Freshbach’s JJQ article “‘Fallen on His Feet in Buenos Ayres’ (D 39): Frank in ‘Eveline,'” the year Joyce wrote the story, “an economic boom began, lasting till 1912, and, for the decade 1901-1910, migration shot up again to 12,585” (224). Eveline has the chance to become just one of many Europeans, which included the Irish, that made a fresh start in the thriving South American city.

Yet for better or for worse, she chooses not to go. Contradicting the example set by other characters in the story like the priest who had moved to Melbourne and her neighbors, the Waters, who had moved to England, Eveline decides in a moment not “to go away like the others, to leave her home” (37).