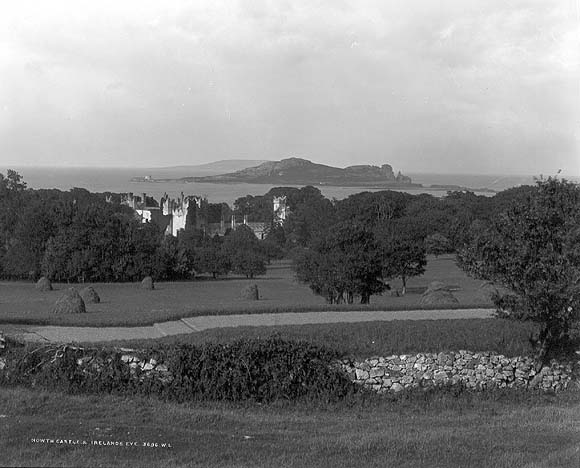 Howth Castle & Ireland’s Eye, by Robert French. Photo published between 1880 and 1900. From the Lawrence Photograph Collection at the National Library of Ireland.

Cited in both “Eveline” and “A Mother” as a leisure destination, Howth has long been a popular retreat for picnicers, hikers, and fishers. It’s a peninsula northeast of the Dublin city center, reachable today by the DART line and in Joyce’s day by tramline. Howth is never a direct setting in either story but instead the subject of reminiscence or an allusion to characters’ preference for local rather than international exploration.

In a rare moment of happy nostalgia for her childhood, Eveline remembers her father being kind and worries that he’ll miss her when she departs with Frank for Buenos Ayres:

“Her father was becoming old lately, she noticed; he would miss her. Sometimes he could be very nice. Not long before, when she had been laid up for a day, he had read her out a ghost story and made toast for her at the fire. Another day, when their mother was alive, they had all gone for a picnic to the Hill of Howth. She remembered her father putting on her mothers bonnet to make the children laugh” (39).

To Eveline, Howth is as exotic a land as she’s ever seen, romanticized in memories and indeed the farthest specific place from the city center still in Ireland that she has visited. In a story containing ten references, only three are in the Dublin area. Another is Belfast, a place connoting material wealth and commerce. The other six references span the globe, shrinking Eveline and her city to a constricting dot on an expansive map.

In “A Mother,” Howth is one of three places the idyllic-seeming Kearney family visit every summer:

“Every year in the month of July Mrs. Kearney found occasion to say to some friend:

-My good man is packing us off to Skerries for a few weeks.

If it was not Skerries it was Howth or Greystones” (137).

Although the two daughters attend good convents where they learn French and music, and Kathleen moves on to the Academy, and both have sufficient dowries, the family is not as well off as Mrs. Kearney projects it to be. Their vacations are never further than 15 miles away from the city center, and we wonder if Kathleen, like her mother, will never use her French other than for reading. Instead, as a bootmakers daughter, she will most likely end up much like Eveline: tied to Dublin by responsibilities to her aging parents. To ensure this situation, it seems, the mother encourages the girls in their activity with the Irish Revival. When explored in this context, Howth becomes not just a peaceful place for a summer holiday, but a symbol of Irish history and mythology, an eastern reflection of Miss Ivors’s Aran Isles, laden with ‘authentic’ Irishness.

Like a million places in Ireland, Howth has its ghost stories and legends as well as its traceable role in the country’s history.

The first known map showing Howth is by Ptolemy and dates back to the second century when, presumably, it was not a peninsula but an island, Edri Deserta. Over the centuries, Dublin itself saw times of flooding which prompted the construction of the canals and the river walls. It’s very likely that the isthmus that now connects Howth to the mainland was indeed underwater.

Map of Ireland Derived from Ptolemy’s Geographia 1490. Available on rootsweb.com.

“Evidence of human habitation on the peninsula dates back to at least 3,500 BC[E],” according to an impressive trail guide that describes the peninsula’s historical and legendary sites. The area was later home to Vikings and Norsemen even after the Battle of Clontarf until the Normans invaded. Tristram St. Laurence then “established his estate at Howth Castle. The castle has remained in the ownership of the St Laurence family ever since, although the unbroken line of male succession came to an end in 1909.”

That the Kearneys return to this place every few years for weeks at a time emphasizes their inextricable ties to the deep historical roots of their home. And these roots stretch from the once-island out of the sea to entangle Eveline in the paralyzing confines of memory and perpetuity that hold her fast to the railing at the North Wall.