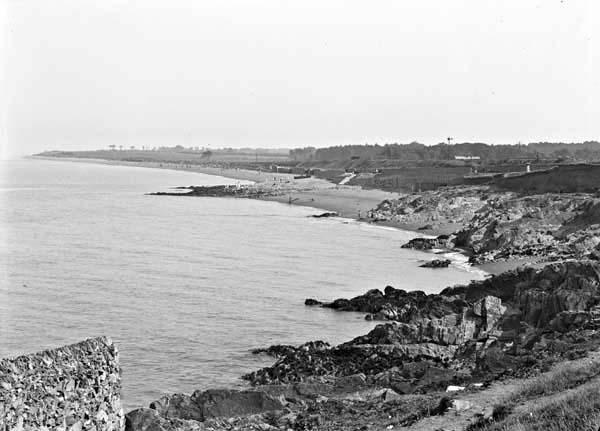 The Coast, Greystones, Co. Wicklow, photographed between 1900 and 1939. From the Eason Photographic Collection at the National Library of Ireland.

The southernmost of three favorite vacation spots for the Kearney family in “A Mother,” Greystones is situated about 17 miles (27 km) south of Dublin’s city center on the eastern coast of Ireland. It is a small fishing village that became a popular summer holiday retreat when the railroad connected the town to Dublin in 1855. Today it would take about an hour to travel to Greystones from Dublin by train. Accounting for number of stops and speed differences, we might estimate a similar if not longer travel time for the Kearneys at the turn of the the twentieth century. The locale is named for the grey stones that form a wall along the center of the coast. On the north end of the wall lies the harbour and on the south the train station and beach.

The reference appears in only one Dubliners story and as a part of a typical Joycean trinity:

“Every year in the month of July Mrs Kearney found occasion to say to some friend:

–My good man is packing us off to Skerries for a few weeks.

If it was not Skerries it was Howth or Greystones.” (137)

Like Skerries and Howth, Greystones suits the economic and Nationalist values of the Kearney family when it comes to vacationing. Unlike Gabriel and Gretta’s continental journeys to France or Germany or even Molly Ivors’s proudly domestic pilgrimages to the Aran Isles, the Kearneys’ yearly weeks-long retreat is always to an affordable destination not too far from home. 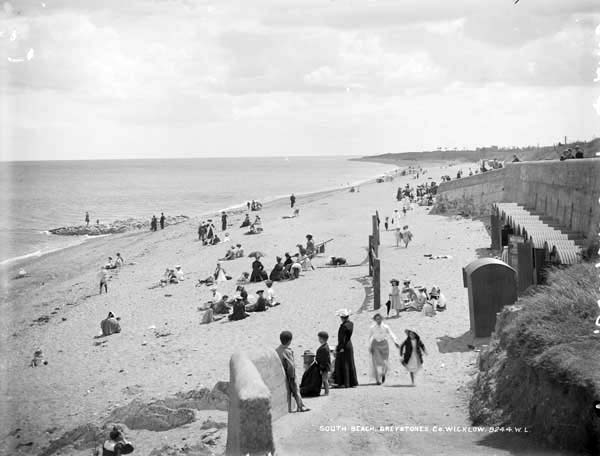 South Beach, Greystones, Co. Wicklow, photographed between 1865 and 1914 by Robert French. From the digitized Lawrence Photograph Collection at the National Library of Ireland.

The reference to these three places is situated within the context of a description of the family’s practicality, foresight, and educational values. Just before the vacation destinations are listed, we learn that Mr. Kearney is “sober, thrifty, and pious,” and that even though Mrs. Kearney “never put her own romantic ideas away,” she nevertheless “perceived that such a man would wear better than a romantic person” (137). Indeed, he is described as “a model father” partly because he invests money in his daughters’ education. But even though part of this education includes the French language, it seems that particular skill is intended more for reading than for the necessity of speaking the language on any potential visit to France. In a rather stream-of-consciousness style, in fact, the narrative shifts from mention of French to the list of Irish vacation destinations to the Irish Revival and the Kearneys’ decision to hire an Irish language teacher for their daughters.

But rather than the Irish vacation spots serving as characteristics of the family’s Nationalism, just like Kathleen’s name, they actually seem to be a circumstance on which the thrifty Kearneys capitalize in their adoption of Nationalist ideology. As a Nationalist, Mrs. Kearney would not need to defend her husband only taking her as far as a suburban fishing village for a holiday–she could “f[i]nd occasion to say” so. And Kathleen was not named with any Irish mythology in mind–“Mrs. Kearney took advantage of her daughter’s name” only once “the Irish Revival began to be appreciable” (137).

Mrs. Kearney’s fiscal defensiveness is not limited to standing up for her daughter’s economic rights when it comes to the concert. It works in far more complex psychological ways: finding opportunity in marriage and political movements as well as in her daughter’s musical education, and frugality in vacation choices. The Kearneys invest in themselves by educating their children just as they invest in their environment by supporting local recreational travel options.