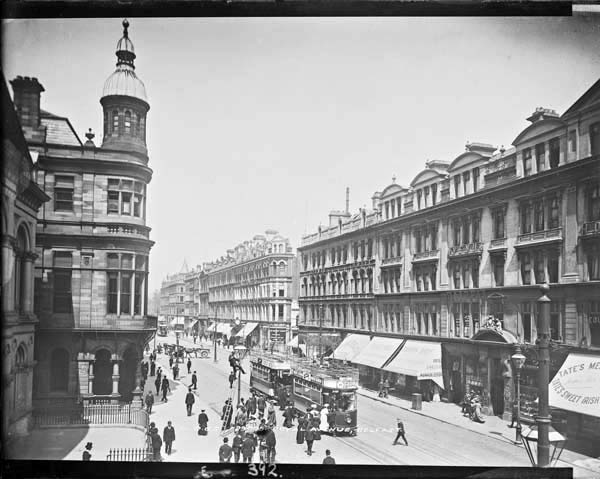 Belfast, now the capital of Northern Ireland, was in Joyce’s day an industrial center that generally, partly because its population depended on its industry, opposed Home Rule. In Dubliners, the city appears in three stories: “Eveline,”  “Clay,” and “Grace.” That the adolescence, maturity, and public life sections all reference Belfast, while the childhood section omits it, may be of some interest in terms of the political implications of the place as they would manifest in the psychology of the stories’ inhabitants. In other words, a young child would be most likely uninterested in, if not unaware of, the simmering anxieties associated with Belfast. But perhaps more importantly, with the exception of “The Sisters,” none of the childhood stories reference places outside of Dublin at all, and in “The Sisters,” the outside references pertain to the priest. The first-person child-as-narrator in the other two stories has very little concern for anyone or anywhere outside his own orbit.

In “Eveline,” Belfast is the home of the man who had built the new houses on Eveline’s street: “One time there used to be a field there in which they used to play every evening with other people’s children. Then a man from Belfast bought the field and built houses in it — not like their little brown houses but bright brick houses with shining roofs” (36). The slick new houses built by the man from Belfast serve as a source of disrupted memory for Eveline, whose adolescence and approaching adulthood are already being colored by materialism fast overtaking the simple pleasures of playing in a field.

In “Clay,” Belfast is where Maria’s purse was purchased: “She took out her purse with the silver clasps and read again the words A Present from Belfast. She was very fond of that purse because Joe had brought it to her five years before when he and Alphy had gone to Belfast on a Whit-Monday trip” (100). Moving beyond Eveline’s vague association, Maria’s awareness of Belfast is as a commercial center and a place where one would go on Whit-Monday (the day after Pentecost, usually in May or June, observed as a public holiday in Ireland until 1973). For her, Balfast is thus a sentimental association with Joe, albeit one that sustains the materialism of Eveline’s association since it is both a money holder and a purchased gift.

“Grace” employs Belfast in connection to the Kernans’ success as parents: “Her two eldest sons were launched. One was in a draper’s shop in Glasgow and the other was clerk to a tea-merchant in Belfast” (156). Glasgow, known in the Victorian period as the “Second City of the British Empire,” not only rivaled Belfast in terms of industry and commerce but also carries political implications. If in the previous two stories Belfast only conveyed commercial connotations, here, set alongside Glasgow, the “Second City of the British Empire,” Belfast becomes a politically charged reference, controversial, perhaps, in Joyce’s use of it as a destination for successfully raised children.

Even though none of the stories attach Belfast explicitly to the political tensions of Ireland and the British Empire, the implications resonate–first at the level of rumor, then sentimental materialism, and finally commercial, vocational, and parental accomplishment.

One Response to Belfast