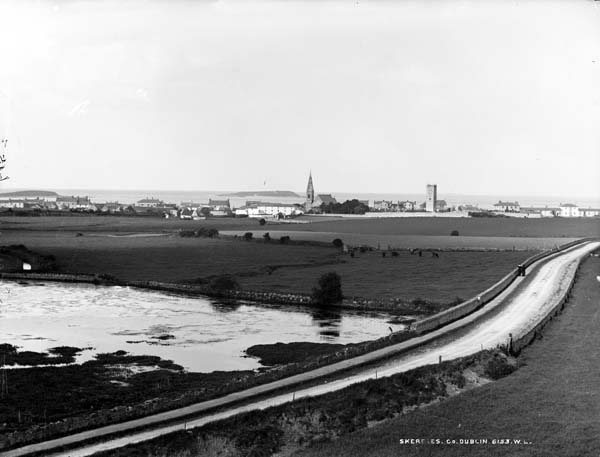 Located on the east coast of Ireland 18 miles north of Dublin, Skerries is a town comprising part of the coastline and a group of islands in the Irish Sea. The seaside locale is mentioned twice in Dubliners as a vacation destination frequented by the Kearney family in “A Mother:”

“Every year in the month of July Mrs Kearney found occasion to say to some friend:

–My good man is packing us off to Skerries for a few weeks.

If it was not Skerries it was Howth or Greystones” (137).

Although it is referenced as a place the Kearneys visit, like all such destinations in Dubliners, it is never an actual setting where the story’s events happen. All the action in Dubliners takes place, appropriately though perhaps disappointingly to the Dubliners themselves, in Dublin. But that doesn’t mean place references outside of Dublin don’t carry just as much impact in the way we interpret the geographical politics of Joyce’s texts. 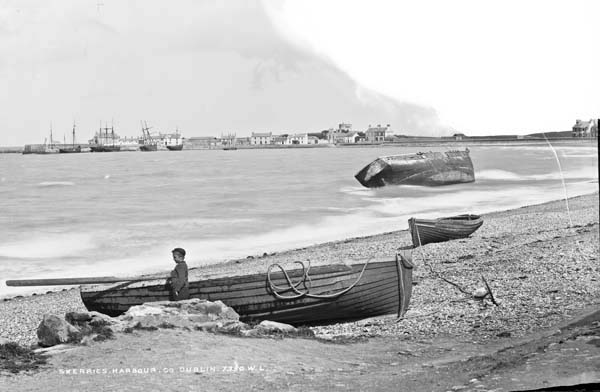 SKerries Harbour, photographed by Robert French between 1865 and 1914. From the National Library of Ireland’s digitized Lawrence Photograph Collection.

Skerries by itself seems, as a reference, somewhat insignificant. It’s a small fishing town on the coast that, in Joyce’s day, served as both an industrial and leisure center. In addition to the town on the mainland, Skerries includes several islands–Shenick (formerly Red) Island, Colt, St. Patrick, and the Rock of Bill (or Rockabill), which technically comprises the Cow and the Calf. According to legend, St. Patrick first touched Irish ground at St. Patrick Island. John d’Alton’s 1838 History of the County of Dublin briefly chronicles nearly 1000 years of monastic and religious activity on St. Patrick island, which “has upon it some remains of the ancient church” (D’Alton 444). With its ruins, lighthouses, and windmills, Skerries would certainly make for a scenic and conveniently located holiday destination for a Dublin family. 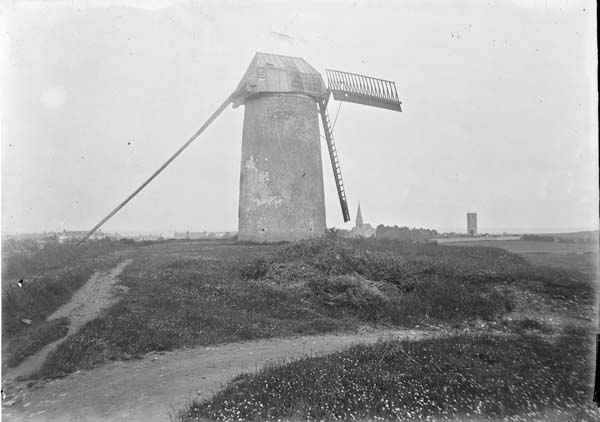 A windmill in Skerries, photographed between 1900 and 1939. From the National Library of Ireland’s Eason Collection.

The reference to Skerries, like many Irish geographical references in Dubliners, carries with it long history steeped in legend. But taken in the context of the other two references–Howth and Greystones–Skerries is part of a Joycean trinity. Perhaps the most apparent observation we can make about this trinitiy of vacation spots the Kearneys frequent is that they are all in Ireland and furthermore very close to Dublin. Since the Kearneys embody the ideals of Irish revivalism, it is fitting that they should choose to spend their leisure time in their home country enjoying the scenic comforts and historic monuments of Ireland. The Irishness of this triad is emphasized when two stories later, in “The Dead,” Gabriel tells Molly Ivors, another revivalist, that he prefers to vacation outside of Ireland:

–And why do you go to France and Belgium, said Miss Ivors, instead of visiting your own land?” (189)

The three possible destinations, coupled with Molly Ivor’s response, directly recall the previous list of three destinations identified in “A Mother,” drawing a connection between Mrs. Kearnery and Miss Ivors. We might imagine Molly Ivors as one of the “little crowd of people [who] would assemble after mass at the corner of Cathedral Street” who were all “musical friends or Nationalist friends” (137). Ivors would ostensibly be both, or perhaps even a version of Kathleen Kearney herself, one who has detached from her mother’s protection and argues now more confidently. The juxtaposition of Skerries, Howth, and Greystones with France, Belgium, and Germany augments one of the dominant themes of the public life stories–Nationalism versus Unionism–and, in typical Joyce fashion, introduces a third player to the binary–in this case Continentalism. This notion of Continentalism appears first in “After the Race” with its diverse cast of multi-national characters. The public life stories, especially “The Dead” reify this notion, and that reification all starts with a seemingly innocuous list of vacation spots in “A Mother,” lead by Skerries.