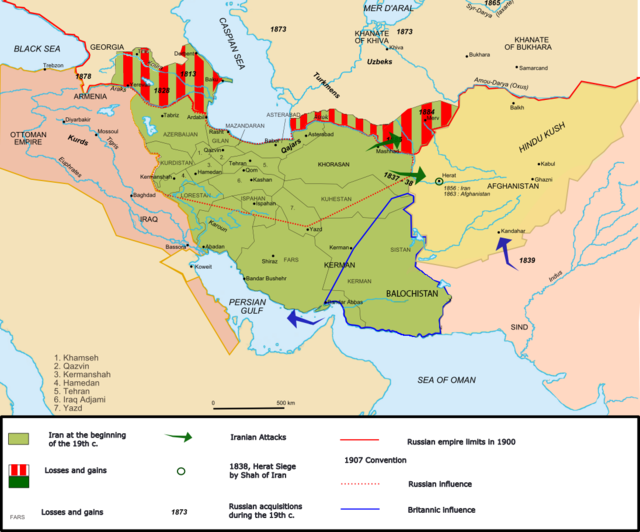 Persia appears momentarily in “the Sisters” as the possible setting for a dream the narrator has the night he hears about Father Flynn’s death. Now modern-day Iran, Persia has had many iterations since the First Persian Empire in 550 BCE. Between that time, also known as the Achaemenid Empire, and 651 AD, it transitioned to the Parthian Empire and then the Sasanian Empire. Much of that time was marked by the ongoing Roman-Persian wars, which lasted from roughly 92 AD to 629 AD. Beginning in 1501, Persia was ruled by a series of dynasties. By Joyce’s time, Persia was under the Qajar Dynasty, which spanned from 1785 to 1925. Unsurprisingly, this period saw increased Brittanic influence, especially in the area to the southeast bordering India and what is now Pakistan. Thus the reference to Persia in the story evokes a long imperial history, not just that of the Persian Empire itself, but also the British Empire, which is also alluded to in the name of Great Britain Street, where the boy walks as he recalls his dream. As he walks, he also recalls that Father Flynn was educated at the Irish College in Rome, a more direct association to the Roman Empire than the one embedded in the Persia reference through the Roman-Persian wars.

There is no mappable route in “The Sisters” like there is in the other two childhood stories, but the narrator’s dream of Persia is a kind of imagined journey to the exotic. This imagined journey represents perhaps an expedition in embryonic form when contrasted with the one in “Araby,” which, though a real route, is only an artificial journey to the exotic locale evoked by the name of the bazaar.

In “The Sisters,” the narrator describes Persia as part of a dream or vision:

“As I walked along in the sun I remembered old Cotter’s words and tried to remember what had happened afterwards in the dream. I remembered that I had noticed long velvet curtains and a swinging lamp of antique fashion. I felt that I had been very far away, in some land where the customs were strange — in Persia, I thought…. But I could not remember the end of the dream.” (13-14)

The smoky memory of the dream echoes the exotic strangeness of the place as a Romantic concept. But the images sharply contrast with the narrator’s realistic surroundings at that moment. He is recalling the dream as he walks down the sunny side of Great Britain Street in the heart of working-class Dublin. Persia and all its mysteriousness represent the secrets and mysteries that also surround Father Flynn whose death he has just confirmed from the notice in the draper’s shop window. The priest had formerly “amused himself by putting difficult questions to [the boy]” which “showed [him] how complex and mysterious were certain institutions in the Church” (13). Persia seems almost a dream representation of the mysticism the boy perceives in the church, and the correlation between the two in his perception shows the church to be an institution as exotic and Romantic as Persia itself.

Frederick Lange points out the downstairs room where the boy and his aunt talk to the sisters is a kind of materialized version of the boy’s dream: “The images of the ’empty fireplace’ and ’empty grate’ are linked to the dream image of ‘lamp.’ The boy recalls the ‘curtains’ in his dream after seeing the Drapery sign and the ‘lamp’ after remembering how the priest used to sit by the fire” (35). Lange’s association serves his purpose of tracing church history in Joyce’s work, but we can also use the comparison to note the evolution of imagery and setting from Romantic to Realist fiction. According to this comparison, the priest and his sisters’ quarters become a modern urban Dublin incarnation of the Romantic East, where “long velvet curtains” are replaced with the commercial Drapery, and the “swinging lamp of antique fashion” becomes the empty grate. And I would argue that we could also compare the “dead-room” itself to the Persia room in the dream, a pairing not so starkly contradictory, and one that reveals the still unevolved Romantic perspectives of childhood. In this case, the “long velvet curtains” become “the lace end of the blind [which] was suffused with dusky golden light” and the “swinging lamp of antique fashion” becomes the “candles [which] looked like pale thin flames” (14). Thus, while the downstairs room, where the grown-ups make small talk, is an uncomfortable and uninviting place (the narrator “grope[s] [his] way to [his] usual chair in the corner” and refuses a biscuit because he fears making too much noise), the upstairs room, where the priest lies dead, is to this child suffused with mystery.