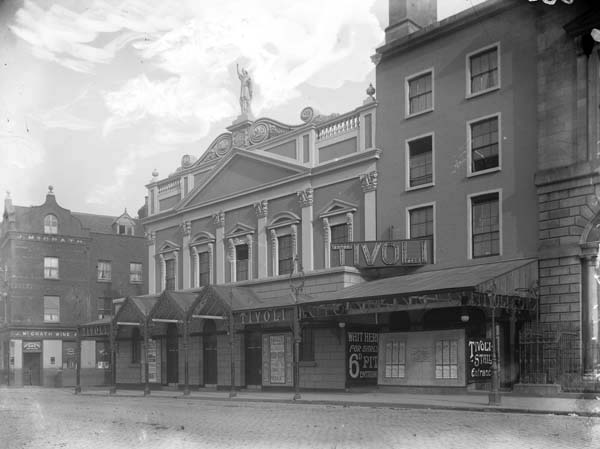 The Tivoli Theatre on Burgh Quay, on the south bank of the Liffey. The theatre would have been a block north of Mulligan’s and a block east of the Scotch House. Photographed between 1901 and 1914 by Robert French, from the National Library of Ireland’s Lawrence Photograph Collection.

The Tivoli Theatre is mentioned twice in “Counterparts” as the venue where Weathers is performing:

“Leonard introduced them to a young fellow named Weathers who was performing at the Tivoli as an acrobat and knockabout artiste. Farrington stood a drink all round. Weathers said he would take a small Irish and Apollinaris. Farrington, who had definite notions of what was what, asked the boys would they have an Apollinaris too; but the boys told Tim to make theirs hot. The talk became theatrical. O’Halloran stood a round and then Farrington stood another round, Weathers protesting that the hospitality was too Irish. He promised to get them in behind the scenes and introduce them to some nice girls. O’Halloran said that he and Leonard would go, but that Farrington wouldn’t go because he was a married man; and Farrington’s heavy dirty eyes leered at the company in token that he understood he was being chaffed.” (94)

When the Tivoli is first mentioned, the group is in the Scotch House, which is about a block west of the theatre, also on Burgh Quay. A block south of the Tivoli is Mulligan’s in Poolbeg Street. This entire area just south of the Liffey is the predominant setting for the story. After the group leaves the Scotch House, and re-congregates at Mulligan’s, Weathers starts drinking cheaper drinks. It’s here that Farrington lusts after the woman with the London accent, whom Weathers explains is one of the Tivoli crowd.

“Presently two young women with big hats and a young man in a check suit came in and sat at a table close by. Weathers saluted them and told the company that they were out of the Tivoli.” (95)

Once again, though, Farrington is “chaffed,” denied anything more than a glance or two, a brush against his chair, and an “O, pardon!”

The Tivoli theatre, as described by John Finegan in “Dublin’s Lost Theatres,” was 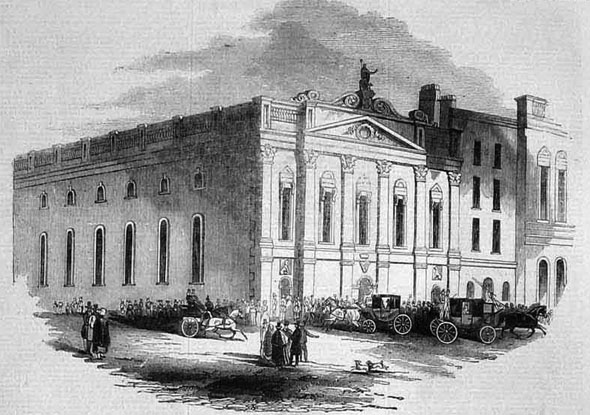 Pictured above, the original building, Conciliation Hall, according to architectural records, was designed by Peter Martin and built in 1843 “as a meeting place for Daniel O’Connell’s Loyal National Repeal Association.” Interestingly, it seems Joyce may have chosen to reference the Tivoli, this musical-theatrical venue that also carries political connotations, as a way of possibly suggesting Farrington’s economic, sexual, and lifestyle paralysis have political origins.

The artiste’s lifestyle is one that Farrington covets, and his frustration at not being equal in economic status, sexual prowess, or physical strength (he loses at arm wrestling to Weathers) all contribute to his violent outburst later that night against his son. Though the Tivoli is simply a place reference, it embodies an entire lifestyle and occupation that Farrington can never fully access or experience. That the theatre has political origins only adds complexity to his situation.

One Response to Tivoli Theatre