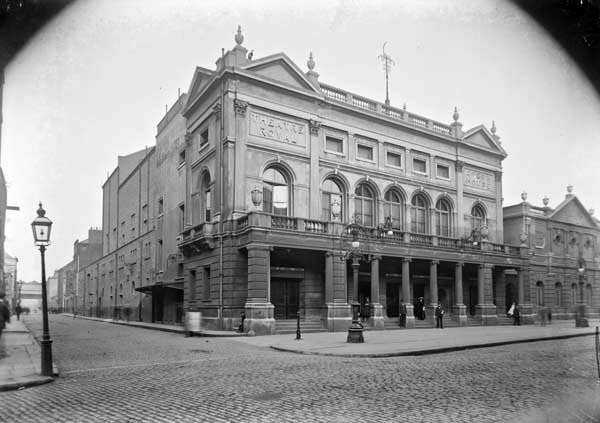 Theatre Royal, Hawkins Street, Dublin, photographed between 1910 and 1930. From the digitized Eason Collection at the National Library of Ireland.

The Theatre Royal appears in only one of the Dubliners stories. It’s the topic of conversation briefly in “The Dead” as the party guests eat dinner and discuss local shows and musical performances:

“The subject of talk was the opera company which was then at the Theatre Royal. Mr. Bartell D’Arcy, the tenor, a dark-complexioned young man with a smart moustache, praised very highly the leading contralto of the company but Miss Furlong thought she had a rather vulgar style of production. Freddy Malins said there was a Negro chieftain singing in the second part of the Gaiety pantomime who had one of the finest tenor voices he had ever heard” (198).

The Theatre Royal is one of three major early-twentieth-century Dublin theatres, along with the Gaiety and Queen’s Theatres, referenced in Dubliners. Though other theatres and venues appear in the stories, Dear Dirty Dublin: A City in Distress, 1899-1916 by Joseph V. O’Brien lists only these three as serious theatres as opposed to music halls or production sites for varieties and “local amateur adventures into serious drama” (45).  Seamus Reilly, however, takes issue with O’Brien’s “hierarchical reading of ‘high’ and ‘low’ music” (12) as well as his limited definition of theatres, arguing in “James Joyce and Dublin Opera: 1888-1904,” that, in fact, Dublin had several theatres and music venues which were every bit as culturally significant as the “serious” theatres O’Brien identifies. A full list of various Dublin theatres and venues, including those like the Tivoli and others mentioned in Dubliners, can be found in John Finegan’s “Dublin’s Lost Theatres.”

Rather than just an august title for a venue, the title “Theatre Royal” indicated a patent from the British monarch, establishing it as an official and legal place to put on serious plays. The designation was historically necessary after the Restoration for venues to legally show “serious” plays, but by the early twentieth century, the title was more a historical one than a legally necessary one. Nevertheless, even though the 1843 Theatres Act eliminated the patent system, British theatre was still heavily censored. Thus, while venues like the Gaiety, which Freddy Malins brings up during the conversation, the Queen’s, and the Tivoli might produce pantomimes, farces, or burlesques, the milieu of the Theatre Royal was typically seen as more serious in nature. Don Gifford even explains that “[t]he Theatre Royal was primarily used for dramatic presentations, the Gaiety for the more socially prominent musical events, and the Queen’s for the productions that fit neither category” (99). Indeed, within Dubliners, James Joyce does represent the theatres according to Gifford’s categorization by placing the opera at the Royal, the pantomime at the Gaiety (both referenced in “The Dead”), and a possibly satirical production of the opera Maritana at the Queen’s (in “A Mother”).

Screenshot of the map showing the Theatre Royal just south of the Liffey and west of Mulligan’s Pub.

The Theatre Royal existed in several iterations on the same site beginning in 1821, and prior to that another Theatre Royal stood, fell, and was rebuilt in Smock Alley, just a block away from the Misses Morkan’s house in Usher’s Island. By the time the Morkans and their guests critique the theatre’s most recent opera in late 1903 or early 1904, though, the structure that stood in Hawkins Street, just steps away from Mulligan’s in Poolbeg Street, was Dublin’s second Theatre Royal to stand on that particular site. The first had burned down in 1880, and the second had only recently reopened in 1897. A recent biography of Mulligan’s Pub contains some interesting history, including the fire, and anecdotes involving theatre performers and patrons.

Joseph V. O’Brien laments that “[t]he great days of the Theatre Royal ended with its demise in 1880 [when it was] burned to the ground” (45). During its “great days,” it did indeed carry the reputation described by both O’Brien and Gifford. But when the theatre reopened in 1897 it became home to a much greater variety of performances, whether for better or worse. Owing perhaps largely to the expanding boundaries of entertainment, the eclectic tastes of Dublin’s populace, and the limited number of theatres with room enough to seat a large audience and accommodate numerous performers, the Theatre Royal featured not only opera, but also, according to an appalled O’Brien “wrestlers, performing dogs, and mumming birds” (46). O’Brien concedes, though, that the Royal did uphold its reputation as a major serious theatre in the city due to performers like Henry Irving, Ellen Terry, and the diva Melba, as well as theatre and opera companies like Mrs. Patrick Campbell’s company and the Moody Manners company. John Wyse Jackson and Bernard McGinley note in their edition of Dubliners that it would have in fact been the Moody Manners Opera Company that performed during the Christmas season at the Theatre Royal.

The Moody Manners Company was one of several popular opera companies that made regular appearances in Dublin during the time “The Dead” is set. A few of the more prominent ones were the Carl Rosa Company, which Seamus Reilly explains “played exclusively in the Gaiety Theatre;” the Rouseby Company; and the Moody Manners Company, which performed primarily at the Theatre Royal. According to “The Moody-Manners Partnership,” a 1958 article in Opera magazine that chronicles the company’s history, the England-based company formed in 1898, just one year after the reopening of the Theatre Royal “with a young chorus, entirely without previous stage experience” (Graves 560). The company was in danger of shutting down due to lack of money, but thanks to a huge turnout at their production of The Daughter of the Regiment in Dublin at none other than the Theatre Royal, they instead flourished. “The tide had turned,” explains Perceval Graves, “[t]henceforward it was all plain sailing” (560).

Seamus Reilly’s list of operatic performances in Dublin between 1888 and 1904 (published in Bronze by Gold: The Music of Joyce) identifies the only Moody-Manners production in December of 1903 as that of Carmen. Therefore, when the dinner guests discuss the “opera company which was then at the Theatre Royal,” they would most likely have indeed been talking about this company and this production. Joyce, an avid opera-goer and singer, may himself have even seen the shows that season. Opera was extremely popular in Dublin at the turn of the twentieth century, and Reilly explains “[t]he love of opera was due to the love of music generally, but opera also represented a chance to hear serious music and remain culturally connected to the developments in European music” (9). Despite Gabriel’s non-participation in the dinner conversation such continental concerns would have certainly interested him. Undoubtedly it’s Molly Ivors’s recent chastising of his lack of Irish pride coupled with Lily’s scurrying about that keeps him from joining in the dialogue.

The Moody Manners Company performed one opera in December 1903 and several in January 1904. Because “The Dead” is most likely set between New Year’s Day and January 6, 1904, the group is most likely discussing a December performance.  Although the The Moody Manners Company performed Carmen, another company put on the world premiere of Muirgheis, an Irish opera by Thomas O’Brien Butler, at the Theatre Royal that same month. The premiere took place on December 7, 1903, but according to Axel Klein’s “Legends in Irish Opera” in the Proceedings of the Harvard Celtic Colloqium, even though “[t]he opera was acclaimed as the first to have a libretto in the Irish language…at its first performance an English text was used and the Irish translation by Thadgh O’Donoghue was printed beside the English words” (44). Klein claims the opera was not very well received, and he notes reviewers couldn’t find much in the work to praise even though they wanted to, if only because it was “so thoroughly Irish” (qtd. in Klein 45). However, the introduction to the vocal score, which was published in 1910 by Breitkopf & Härtel, insists the premiere was produced “with great success.”

The opera’s argument, which is embedded below from the 1910 published score, explains that the story involves a love triangle between a man and two sisters. Muirgheis, which in Irish means “magic of the sea,” is the lead and is intended to be played by a soprano, while Muirgheis’s sister, Maire, is to be sung by a contralto. In “The Dead,” Bartell D’Arcy “praise[s] the leading contralto.” Although the soprano is technically the lead, he may be referring to whomever played Maire in the production. In the end, Maire, consumed by guilt and still unloved by Diarmuid, drowns herself but is turned into an ocean wave by Donn who decrees “The wind shall drive thee shoreward mid the foam, But never bring thee home…Thou shalt not die. This doom I give.” 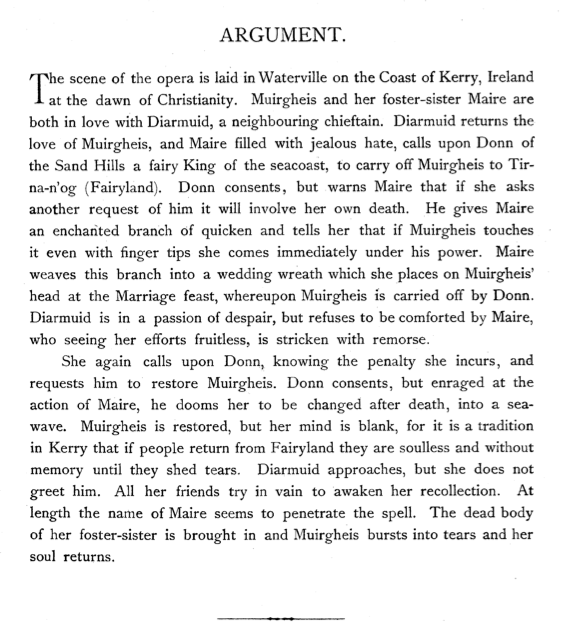 A page from the 1910 publication of Butler’s Murgheis vocal score.

The other performance the guests may be referring to is Carmen, an opéra comique by Georges Bizet. The lead role of Carmen, whom Harold Schonberg likens to Don Giovanni in that “she dies for a principle” (107), is meant to be sung by a mezzo-soprano, a range only slightly higher than contralto. Carmen would have been perhaps more likely to elicit a response like Miss Furlong’s, which is that she “had a rather vulgar style of produciton,” especially since it’s possible she was played by Maria Gay. Gay was considered, beginning in 1902 with her premiere in the role, one of the best Carmens of her time. In one 1907 review, the author argues that “[i]if she were never to improve on her Carmen it would nevertheless, in the opinion of many conservative London critics, be the most commanding representation of the character since it was conceived by its author generations ago” (168) and that “her voice has an immense range. The lower register is as grand as the diapason of a church organ, while her upper notes are clear and full as the trill of a lark” (167). Another review in 1908 asserts “Maria Gay remains the only real Carmen before the opera-going public” (442).   By this time she was well established, but it’s possible in 1903 that without such widespread acclaim, Miss Furlong could have found her style vulgar. Such a critique, though, may have been more aimed at the character herself rather than the singer, although it is said that Gay ate an orange on stage before Habanera. Below is a recording of Gay singing the Habanera from Carmen.

Both Carmen and Muirgheis feature female leads, not altogether common in opera, but which nicely suits some of the themes of “The Dead.” While the story begins as Gabriel’s, the narrative is wrested from him by Gretta, who, at the end, tells the most powerful story perhaps in all of Dubliners. Like the River Shannon, named after a powerful mythical female, and which is referenced late in the story, the unnamed yet implied references to Carmen and/or Maire invoke the underlying current that flows under the story, that while the story may be about the man, it is told and ultimately controlled by the woman.

And even though Carmen may be the more well-known opera to be performed that December at the Theatre Royal, the possibility of the Irish Muirgheis adds to that polarity between European and Irish that permeates not just “The Dead,” but Dubliners as a whole. Surely it isn’t just coincidence that these two operas, one written in English and Irish and the other in French (though often performed in English), reify the recent dispute between Gabriel and Miss Ivors, which he is sulkily reviewing in his mind at just this moment. In true Joycean style, the puzzle, itself only observable by considering the place referenced,  becomes a way to read the story.