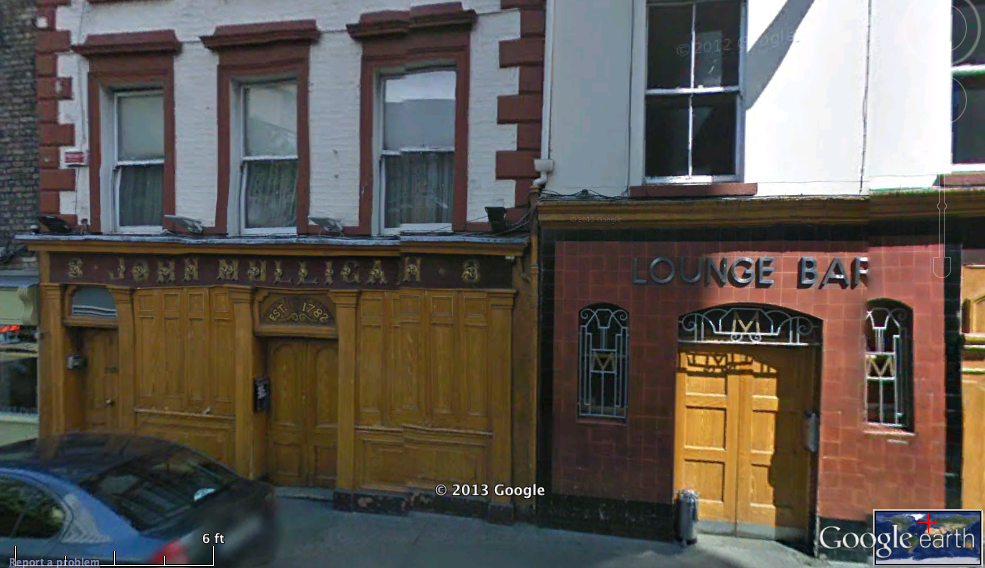 Screenshot of Google Earth street view of Mulligan’s from the map. Copyright Google 2013.

This week’s featured place is Mulligan’s, a pub in Poolbeg Street that serves as the setting for Farrington’s arm wrestling match with Weathers in “Counterparts.”

It’s also where Farrington admires the lady from London, wishing that he hadn’t already spent all his money standing drinks for Weathers. It’s the final bar of the night, after Farrington and his varying crew have left Davy Byrne’s and the Scotch House:

“Weathers made them all have just one little tincture at his expense and promised to meet them later on at Mulligan’s in Poolbeg Street” (94).

“When the Scotch House closed they went round to Mulligan’s” (95).

According to the pub’s website, it was opened at its current location in 1854. Also according to the website, though they admit that the information is rather suspect, Joyce possibly “wrote at the counter of the premises while he sipped his guinness.” Regardless of whether or not that actually happened, Joyce certainly made a historic marker of the establishment by bringing his characters in for a few rounds on that February evening.

Storymap, “a web based multimedia project that revives Ireland’s age-old tradition of storytelling,” has filmed, on location, a re-enactment of the arm-wrestling scene in the story. The film is one of many that comprise this energetic interactive map of Dublin stories.

4 Responses to Mulligan’s in Poolbeg Street