The path Farrington travels in “Counterparts” is confined to the south side of the Liffey. Most of the story sees him wandering between pubs in the Temple Bar area. He visits places like Davy Byrne’s, The Scotch House, and Mulligan’s in Poolbeg. Once he runs out of money and drinking companions, he catches the tram at O’Connell Bridge and heads home to Shelbourne Road outside of the city center.

In all, he travels about 2.8 miles, or 4.5 kilometers. He starts at his office near O’Neill’s, a pub and shop which he visits briefly for a porter before returning to work at Crosbie & Alleyne. After he leaves the office for the evening, he makes his way to a pawn shop in Fleet Street to acquire some drinking money for the evening. From there he walks down Westmoreland Street to get to Davy Byrne’s, a pub later made famous by Bloom and his cheese sandwich and burgundy. After telling his friends various versions of his day’s events, the group separates and Farrington continues with O’Halloran and Leonard past the Ballast Office and on to the Scotch house on the south bank of the Liffey. There they meet Weathers and together close down the Scotch House and remove to Mulligan’s in Poolbeg Street. It’s there that Farrington loses his confidence as well as the arm wrestling match with Weathers. “Sullen-faced” (96), he suddenly stands alone on the O’Connlel Bridge, the closest he ever gets to the north side of Dublin, waiting for the Sandymount tram to take him home. The tram drops him in Shlebourne road where he hugs the wall of the barracks until he arrives at the side entrance to his home.

The animated approximated path Farrington takes shows a distinct shift from the bustle of the Temple Bar area to the quiet, almost monotonous landscape of his suburban neighborhood. 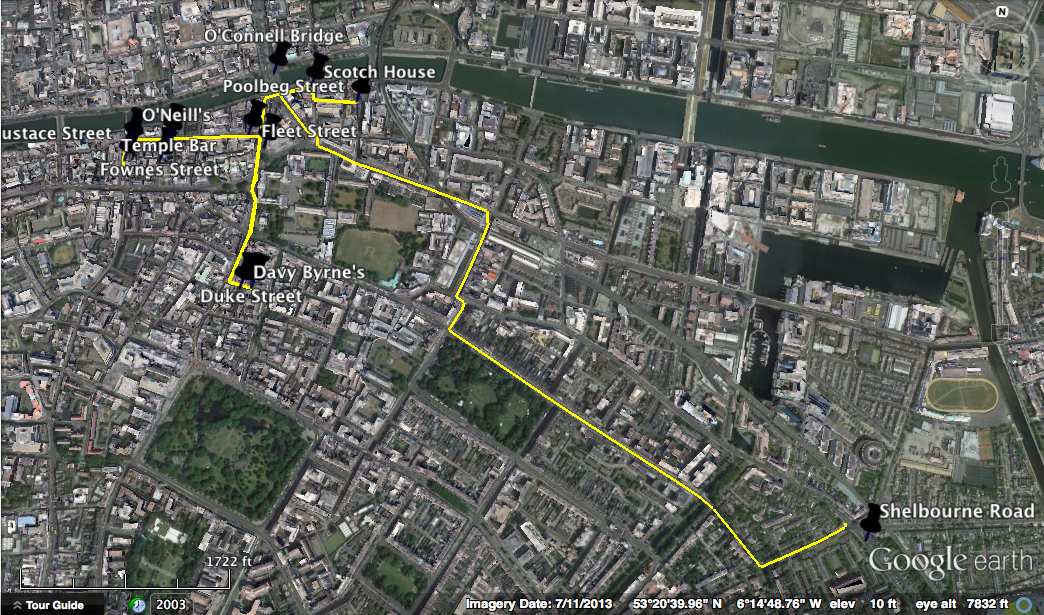