By Jasmine Mulliken
The route Maria travels in “Clay,” from the laundry in Ballsbridge to her brother Joe’s house in Drumcondra, is approximately 5.5 kilometers (3.4 miles). Though the distance doesn’t seem great, she estimates the trip will take about an hour:

It’s Hallow Eve at the end of October, and in Dublin it would already be dark when Maria embarks on her journey, and she is eager to reach her family before she misses the festivities already under way. The darkness, combined with her age and the time it would take to walk are all possible factors in her decision to take the tram rather than walk like so many other characters do in Dubliners. The young boys in the childhood story “An Encounter” walk 4.6 km, a similar distance to Maria’s 4.5 km, but they spend most of the morning and afternoon doing so. And Lenehan in the adolescence story “Two Gallants,” covers 8.4 km (5.25 mi.) on foot while waiting for Corley to coax a coin out of his girl. Maria, a middle-aged woman with a clear destination, on the other hand, plans her route with efficiency. Indeed, the maturity section brings with it characters who travel, in general, more efficiently, and only walk when they want to think or drink. Whereas Maria’s maturity-story counterpart Farrington covers the same amount of ground in his story that she does in hers, his route spans several hours, is broken up by stop-ins at pubs, and concludes with, incidentally, a ride home on the Ballsbridge tram line, though his is in the opposite direction and he disembarks before reaching Ballsbridge. Little Chandler also walks in “A Little Cloud,” but his destination is only 1.5 km from his starting point, and he indulges a contemplative revery every step of the way. James Duffy walks to think through the shock of Emily Sinico’s death, not to get from one geographical point to another.

Maria’s efficient route turns out to have its own contradictions and symbolic problems, however.

Screenshot of the Google Earth map showing Maria’s route in “Clay,” beginning in Ballsbridge in the southeast and ending in Drumcondra in the northwest.

The first leg, the walk to the tram along the “streets…shining with rain” (101) and the tram “[f]rom Ballsbridge to the Pillar, twenty minutes” is rather uneventful. She spends the twenty-minute ride rather awkwardly on display, though, since “[t]he tram was full and she had to sit on the little stool at the end of the car, facing all the people, with her toes barely touching the floor” (102). During the ride, she feels appreciative that she is independent and has her own money.

The second phase of the journey introduces an interesting visual parallel to the themes and motifs of Christianity apparent throughout the rest of the text. (In the beginning we learn Maria, a Catholic, works among Protestants; and at the end, Maria chooses the prayer book in a game she plays, signifying that she will “enter a convent before the year [is] out” [105].) When Maria (a name invoking both the virgin Mary and Mary Magdalene)  exits the tram at Nelson’s Pillar in Sackville (now O’Connell) Street, she first heads east along Talbot Street to Downes’s cakeshop. As efficient with money as she is with time, she is careful not to waste a cent on cakes without enough icing, and since Downes’s doesn’t meet her icing standards, she doubles back and crosses Sackville Street heading west to a shop in Henry Street. After purchasing sufficient plumcake, she boards another tram back at the Pillar and continues northward toward Drumcondra. When viewed on the map, her movements form the shape of a cross: 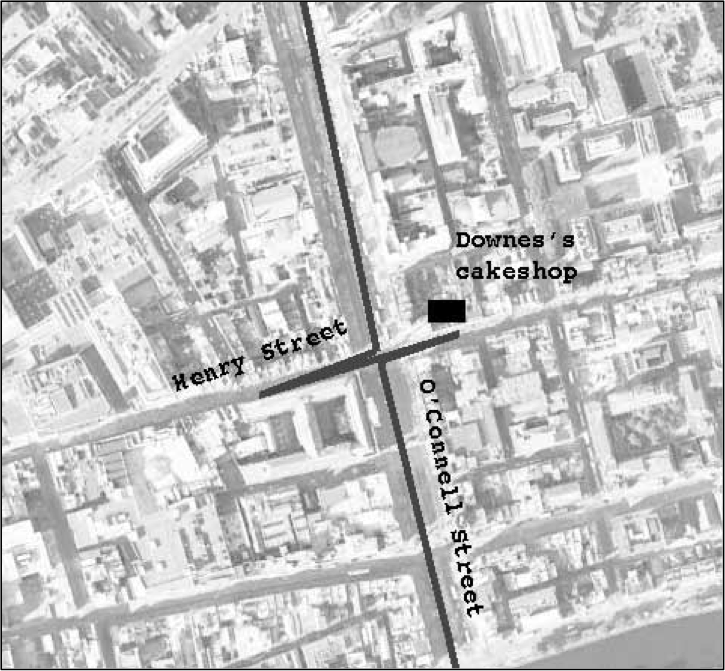 The middle section of Maria’s route in “Clay,” which forms the shape of a cross. The visual symbol echoes the already apparent Christian themes and motifs in the story.

“[F]rom the Pillar to Drumcondra” finalizes the trinity of phases within Maria’s route. If the first phase highlighted her pride in financial independece, and the second emphasized her efficiency with financial transactions, the third proves it all futile. Though she starts the ride thinking she will have to stand due to the crowd, she is quickly offered a seat by “a colonel-looking gentleman” who is “very nice with her” (102-103). Once she reaches the house, though, she realizes she has left the icing-slathered plumcake on the tram because of “how confused the gentleman with the greyish mustache had made her” (103). Was it her distraction with the man and lack of financial focus, the disruption of the economic trinity organized by the phases of her trip, that caused this failing? What are the connections between Christianity and economics and efficiency in “Clay?”

Maria initially chooses the clay in the game at the end of the story, but the children are scolded for even making clay an option because it means death, and Maria re-chooses the prayer book. Instead of death, the real outcome, she gets a life devoted to Christ. Which one is real? Which is better? Maria has financial independence and the freedom to buy cakes in any cakeshop she wants. But were she married to a man, like the one in the tram, who distracts her from her material possessions, her earth, her clay, she would have a life devoted to a husband. Which one is real? Which is better?