One of the longest and most intricate routes in Dubliners is contained in “Two Gallants.” Though the “After the Race” route spans roughly 17 kilometers (10.6 miles), and “Two Gallants” only about 8.4 km (5.25 mi.), the former is traveled via various methods of transportation while the latter is traversed entirely on foot. Unlike “After the Race,” which features a comparatively  straight line from west to east, “Two Gallants” is full of winding, doubling-back, circling, and zig-zagging. Fading the map slightly, the route looks like this: 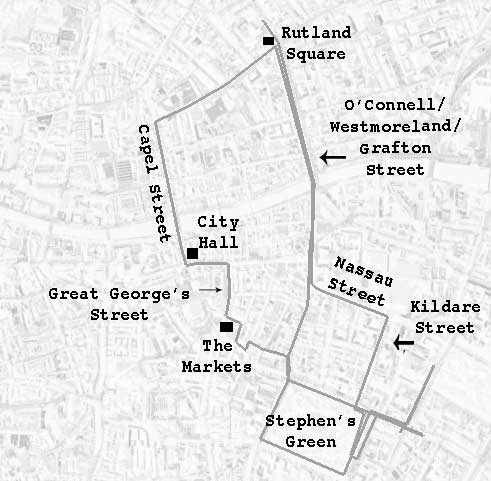 One striking feature of the geometrical funhouse that it is this route is the pseudo-gnomon in the vicinity of Great George’s Street. “Gnomon,” of course, is one of three words (along with “simony” and “paralysis”) that the narrator of “The Sisters” finds fascinating. It can be defined, in the Euclidean sense, as a parallelogram missing a smaller parallelogram from one of its corners. Here is a diagram and deeper explanation of gnomon. The gnomon reference in”Two Gallants” is quite invisible in a strictly textual reading, but surfaces beautifully with the aid of a map,  a seemingly natural supplement to a story with so many geographic references and whose action is heavily informed by the location of the character(s) at any given moment. If the visual cue on its own isn’t entirely convincing, we might consider Lenehan’s thoughts just before he walks the gnomonic lines of his route. In a shop, eating his peas, he considers all the missing pieces of his life: a job, a home, a warm fire, a good dinner, “some good simple-minded girl with a little of the ready” (58). The empty space in his gnomonic route comes only a few minutes after he’s recognized the empty space in his life, a sort of perambulatory confirmation of his preceding thoughts.

The story’s interpretations are also enhanced by the element of time. Twilight is approaching, the street lamps are shining, and the moon and its double halo are already visible when the story opens. The sun sets in Dublin in August around 8:15 at the beginning of the month and about 9:20 at the end. At one point when Lenehan and Corley are still together, toward the beginning of the story, Lenehan notes it’s “[t]wenty after” (53) and later, after they separate he wonders “how he could pass the hours till he met Corley again” at “[h]alf ten.” Thus it’s probably just after 7 or (more likely) 8 at the beginning of the story. Corley and Lenehan walk together, joking and bantering, from Rutland Square to the east side of Stephen’s Green, a distance of about  2 kilometers. According to the map, walking from Rutland Square to Stephen’s Green would take 28 minutes. During their walk together, Lenehan listens to a long narrative of Corley’s and “laugh[s] noiselessly for fully half a minute” (50); they discuss Corley’s girl; they smoke a cigarette, discuss the evening’s plan, talk more about Corley’s girl, hear a harp play as they walk, spy on the girl, and then separate. All of this happens with seeming fluidity, and the men seem comfortable enough in each other’s presence. However, the conversation becomes more stilted, more strained, when we realize that it has taken place over nearly half an hour.  Taking the time into consideration, the conversation shows signs of strain: a lughing reaction must take a full half a minute; a conversation topic dies and must be reignited several minutes later; the offer of a cigarette acts almost as a filler for the perhaps awkward silence. Once Corley breaks away from his companion to converse with his “slavey,” Lenehan wanders the city, covering nearly another six kilometers over the course of two to three more hours. Lenehan reunites with his friend after 10:30, maybe even 11.