The city of Dublin has a long history, but perhaps its oldest structures and remnants are in the area of Dublin Castle, south of the Liffey. A site rich with connotations of power and politics, it’s no surprise that one of the Dubliners stories that references the Castle is “Ivy Day in the Committee Room.” At the time in which the story is set, the Castle served as the seat of the Royal Irish Constabulary and the chief secretary for Ireland. Twenty years before Irish independence, these were obviously British offices. 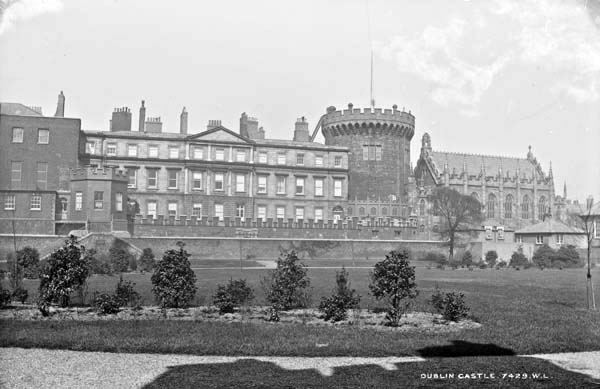 Dublin Castle, Dublin City, Co. Dublin, photographed by Robert French between 1865 and 1914. From the Lawrence Photograph Collection at the National Library of Ireland.

Mr. Henchy, a centrist, alludes to the Castle to indicate his suspicion that Hynes (though he eases up on Hynes quickly) and others like him are spies, British sympathizers only feigning support for the Nationalist working class to get information:

“–[Hynes] doesn’t get a warm welcome from me when he comes, said the old man. Let him work for his own side and not come spying around here.

–I don’t know, said Mr. O’Connor dubiously, as he took out cigarette-papers and tobacco. I think Joe Hynes is a straight man. He’s a clever chap, too, with the pen. Do you remember that thing he wrote…?

–Some of these hillsiders and fenians are a bit too clever if you ask me, said Mr. Henchy. Do you know what my private and candid opinion is about some of those little jokers? I believe half of them are in the pay of the Castle.

–O, but I know it for a fact, said Mr. Henchy. They’re Castle hacks…. I don’t say Hynes…. No, damn it, I think he’s a stroke above that…. But there’s a certain little nobleman with a cock-eye—you know the patriot I’m alluding to?

By the end of the story, Henchy is encouraging Hynes to recite his Parnell poem, applauding the young man’s loyalty and sincerity. His suspicions seem to be forgotten or at least placed on more deserving targets.

Dublin Castle appears in another public-life story, “Grace,” in quite another context. In fact, the young man who helps Mr. Kernan home after his drunken fall works at the Castle:

“Mr. Power, a much younger man, was employed in the Royal Irish Constabulary Office in Dublin Castle. The arc of his social rise intersected the arc of his friend’s decline, but Mr. Kernan’s decline was mitigated by the fact that certain of those friends who had known him at his highest point of success still esteemed him as a character. Mr. Power was one of these friends. His inexplicable debts were a byword in his circle; he was a debonair young man.” (154)

Mr. Kernan’s vocation also connects him to England as he works for a London tea firm with an office in Dublin’s Crowe Street. For both these men, the British empire offers gainful employment even though both men arguably suffer much because of it. 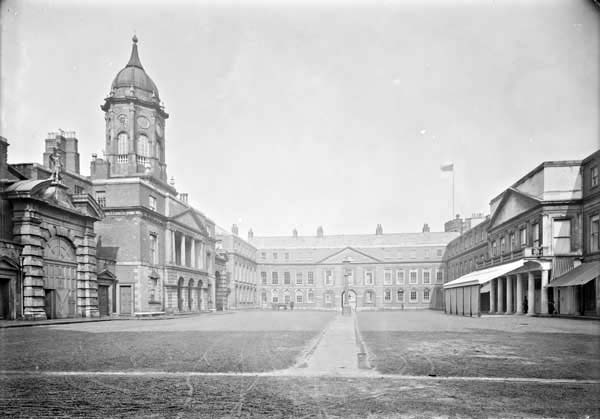 Castle yard, Dublin Castle, Dublin, photographed between 1900 and 1920. From the Eason Photographic Collection at the National Library of Ireland.

“Ivy Day” directly criticizes British rule while “Grace” does so implicitly and more ambiguously, but both stories make their commentaries, in part, through their reference to Dublin Castle. The Castle itself was originally built in the 13th century, but before it was a castle, it was a Viking stronghold situated on a hill overlooking the intersection of the Rivers Liffey and Poddle. (The Poddle, according to Dublin Castle at the Heart of Irish History, is now underground.) In the 9th century, the Vikings, led by Olaf the White, made Dyflinn (or Dubhlinn, meaning “Black Pool”) the center of the kingdom of Dyflinnarskiri, which, also according to Dublin Castle at the Heart of Irish History, “stretched along the coast from Skerries to Wicklow and up the Liffey valley as far as Leixlip.” The King’s Palace would have stood at the site of Dublin Castle. The Vikings built up and held the area until the Battle of Clontarf when they were defeated by Brian Boru to whom they paid tribute. Because of this they were allowed to stay but both fell to the Normans in the 12th century.

The medieval castle was built in the 13th century and it has since been rebuilt several times over the centuries. Naturally, the Castle is symbolic of Ireland’s long and tumultuous political history. It would be impossible to interpret its reference by Joyce as simply an allusion to British authority in Ireland. It’s always more complicated than that. In this case it’s potentially a reference to everything from the Vikings to the Irish that overthrew them to the Normans that usurped them both to, yes, the British Empire, to an entire millennium of shifting power structures that are always vying for that power, whether through espionage, police force,  open combat, or socio-economic manipulation and oppression.

One Response to Dublin Castle