Chapelizod is a neighborhood in the western part of Dublin, along the banks of the Liffey. In Joycean contexts it’s best known as the home of the Earwicker residence in Finnegans Wake, but it’s also where James Duffy lives in the Dubliners story “A Painful Case.” The story opens with a very Duffyesque voice explaining “Mr. James Duffy lived in Chapelizod because he wished to live as far as possible from the city of which he was a citizen and because he found all the other suburbs of Dublin mean, modern and pretentious” (107). 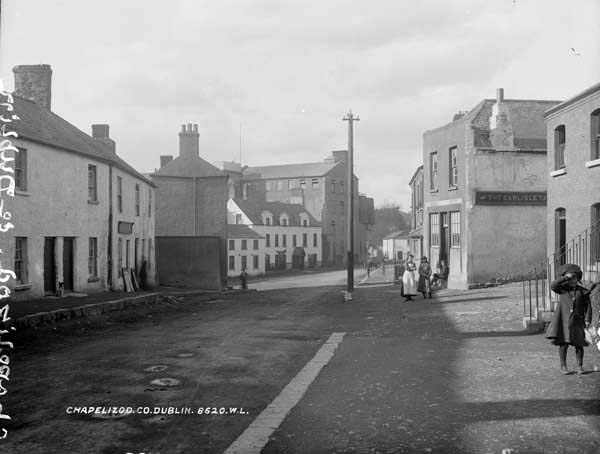 “Village, Chapelizod, Co. Dublin,” showing a street in Chapelizod, photographed by Robert French between 1865 and 1914. From the Lawrence Photograph Collection at the National Library of Ireland.

Although Mr. Duffy lives in the suburbs, “[e]very morning he came in from Chapelizod by tram” to his office in Baggot Street (108), near the area where Corley meets his girl in “Two Gallants.” Chapelizod is mentioned two more times in the story, both in rather dreary terms after he has read the news of Mrs. Sinico’s death. The first time, he is aware of the news, but the reader is not:

“He walked along quickly through the November twilight, his stout hazel stick striking the ground regularly, the fringe of the buff Mail peeping out of a side-pocket of his tight reefer overcoat. On the lonely road which leads from the Parkgate to Chapelizod he slackened his pace.” (113)

Once he arrives at his house, he rereads the story in the newspaper, and this time the reader also gets access to the news that his problematized lover, “[h]is soul’s companion,” has been struck by a train and killed. Unable to calm his nerves, he goes back out into the cold night: “When he came to the public-house at Chapelizod Bridge he went in and ordered a hot punch” (116). 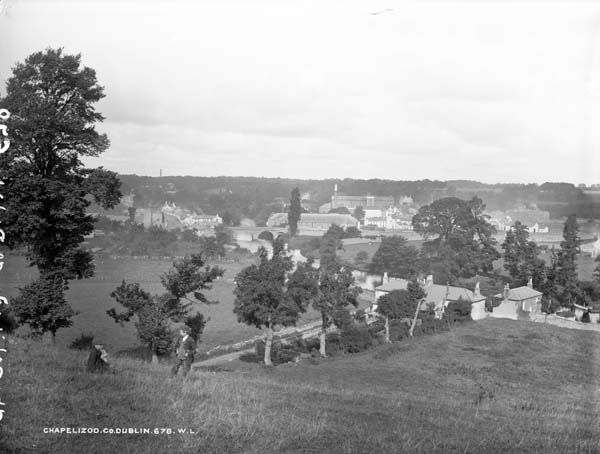 “Chapelizod, Co. Dublin,” showing a view of the village, looking south from the hill above. This view is more romantic than the one above, perhaps even Wordsworthean ala “Tintern Abbey.” Recall that Mr. Duffy keeps his Wordsworth on the bottom shelf of his bookcase.

Duffy’s feeling about Chapelizod is somewhat complex. He sounds rather unromantic about his reasons for living there on one hand, listing only his reasons for not living somewhere else as his motivations. Nevertheless, that he does not want to live somewhere “mean, modern, and pretentious” implies that he does  want to live somewhere just the opposite. Chapelizod, especially as it is reflected in Finnegans Wake, has rather romantic associations. It’s name means “Iseult’s chapel,” and Iseult refers to the Irish princess that features in the Tristan and Iseult stories. There are many versions of these stories, but perhaps the one most contemporary to Joyce’s work would have been Richard Wagner’s opera Tristan and Isolde. In this version, Isolde initially heals Tristan, her family’s enemy, after he is wounded in battle. She is later betrothed to Tristan’s uncle Marke, but during the voyage to Brittany to meet her fiance, she and Tristan, who is escorting her, drink a love potion and fall madly in love. Isolde still marries Marke, but she and Tristan meet during the night while her husband is hunting. They are caught and Tristan is wounded in an ensuing fight. He flees, but Isolde follows him. Tristan dies of his wounds just as his love arrives, and she dies of sorrow. In another version of the story, Mark stabs Tristan, and Iseult asks him to use his last bit of strength to kill her with his embrace, which he does. 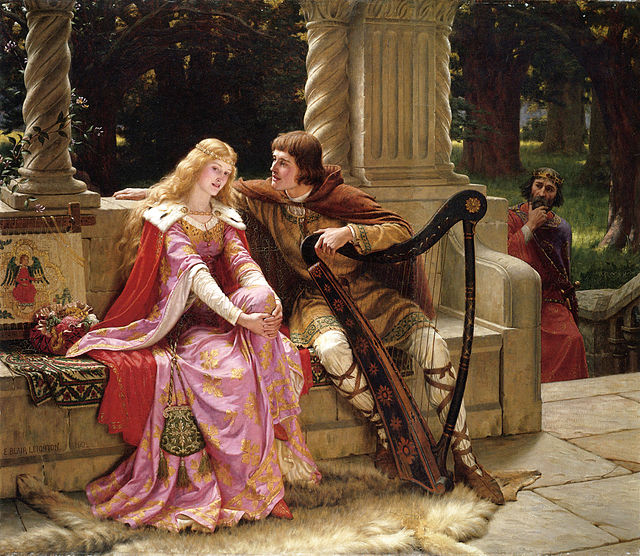 If Chapelizod isn’t, in “A Painful Case,” “mean, modern, and pretentious,” it also isn’t dramatic and romantic in the way that its name’s associations would imply. While Emily Sinico exhibits certain Isolde-like qualities, James Duffy is certainly no Tristan. Mrs. Sinico is a married woman with obvious affection for Mr. Duffy, and even though the two spend time together at concerts, on walks, and eventually even at her cottage in the evenings; without a love potion, Mr. Duffy is not, after all, able to “ascend to an angelic stature,” to “emotionalise his mental life” (111), at least with her. Without a love potion, he can only “insist[…] on the soul’s incurable loneliness,” resolving that “[w]e cannot give ourselves…we are alone.” Although like Tristan and Isolde, Duffy and Sinico inhabit the world of night, existing together only in darkness, and though Duffy even begins to enjoy this, he is ultimately confined by what he accepts as his own sombre reality. The two “agreed to break off their intercourse” and four years later, his would-be Iseult was dead. Even though he’s attracted and moved by what Chapelizod represents and references, his Chapelizod is actually a stark realistic neighborhood in Dublin, the city whose brown tinted streets are reflected in his face (108). He does not follow Mrs. Sinico into death but stands at the end of the story listening to the silence, feeling alone, feeling realistic.