By Jasmine Mulliken
The eighth story in Dubliners, “A Little Cloud” is the fifth story to contain a distinct route. It begins in the north part of Dublin city center, at an office in Henrietta Street. The story then follows Little Chandler as he traverses a path to meet his friend Gallaher who is visiting the city he had left eight years prior in search of adventure and a life outside of Ireland. Little Chandler meets Gallaher at Corless’s, a pub in the busy area just south of the Liffey.

On his journey, he would move steadily from the offices and “gaunt spectral mansions” of north Dublin with its “horde of grimy children” (71), past the shops of Capel Street, across Grattan Bridge, into and along Dame Street towards Trinity College and the financial district, and finally into Church Street to Corless’s. He actually passes Church Street, lost in thought, and has to double-back, but because Dame Street ends at Trinity College, and Church Street is the first cross-street before Trinity, Chandler isn’t much delayed at all. 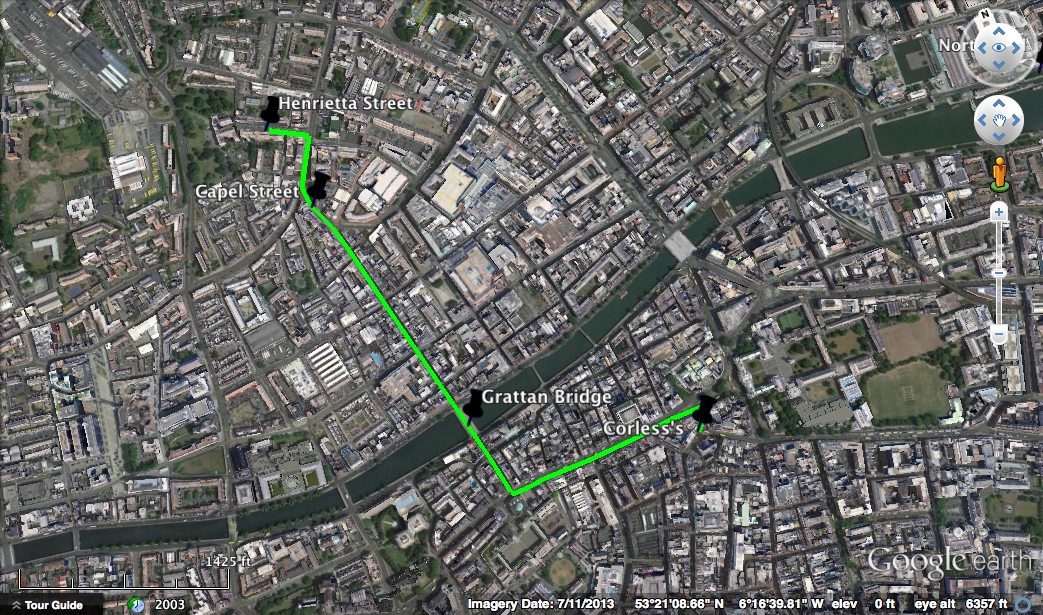 “A Little Cloud” route, as illustrated on the Google Earth version of the Mapping Dubliners Project. The total distance is just under a mile, or 1.55 kilometers, which would take approximately 20 minutes. Since Chandler stops on the bridge, he would have taken a bit longer.

The route illustrated on the map and in the video above are approximations; they represent the most direct route to Corless’s as it is located by Don Gifford, at 26-27 St. Andrew’s Street and 6 Church Lane, right across the street from St. Andrew’s church in the Burlington Hotel. However, it’s likely that Little Chandler may have avoided the bustling avenues in favor of quieter lanes, for “[s]ometimes he courted the causes of his fear. He chose the darkest and narrowest streets and, as he walked boldly forward, the silence that was spread about his footsteps troubled him; and at times a sound of low fugitive laughter made him tremble like a leaf” (72). Still, Joyce explicitly has Chandler “[turn] to the right towards Capel Street” (72) and then later describes “his soul revolt[ing] against the dull inelegance of Capel Street” (73). He then “crossed Grattan Bridge [where] he looked down the river towards the lower quays and pitied the poor stunted houses.” His attitude on this night does not seem to be one of immersing himself in his fears. Rather, he seems above his fears, disdainful of them even. Perhaps this isn’t one of the “sometimes” when he chooses the quieter lanes.

Once he’s across the bridge, his attitude shifts from disdain toward his fellow Dubliners to a “melancholy” (a word used three times in one paragraph) that he channels into a desire to write poetry “of the Celtic school” (74). He also considers it “a pity his name was not more Irish-looking.” It is during this period of “revery” that “he passed his street and had to turn back.” Finally, “[a]s he came near Corless’s his former agitation began to overmaster him and he halted before the door in indecision.” He quickly makes up his mind, though, and enters “the light and noise of the bar,” initiating the next phase of the story, which is set in the bar and centered around the men’s conversation. The story then abruptly shifts to its third and final phase set in Chandler’s home in an unspecified location.

The route serves to introduce Little Chandler’s complex character as he interacts with the disparate features of his city.

4 Responses to “A Little Cloud” Route