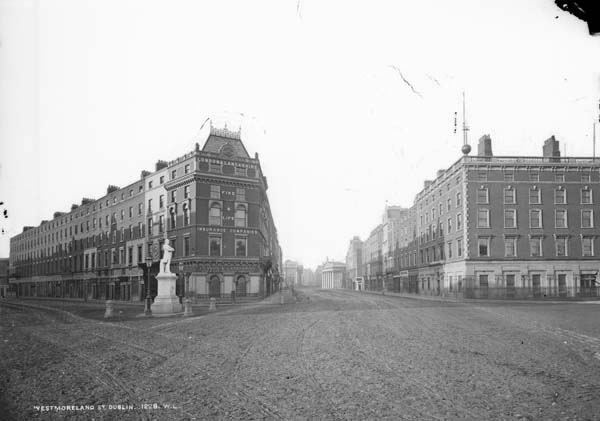 Westmoreland St., Dublin City, Co. Dublin, photographed by Robert French between 1865 and 1914. From the National Library of Ireland’s Lawrence Photograph Collection. The view represents a southward look down Westmoreland Street from O’Connell (Carlisle) Bridge. To the left, stretching southeast, is D’Olier Street. Between the two streets is the “central plot directly opposite the bridge” that Christine Casey describes as “the single most conspicuous site in the city” (Casey 422).

Mentioned in three of the Dubliners stories, Westmoreland Street is located in Dublin city center. It runs  from O’Connell Bridge in the north  to its intersection with Grafton and Dame Streets and Trinity College gates in the south. It was built as part of the Wide Streets Commissioners’ “bold geometric plan” to “link … the new N[orth]-S[outh] artery of Upper Sackville Street [now O’Connell Street] and Carlisle Bridge [now O’Connell Bridge] to the Portico of the House of Lords and the N[orth] pavilion of Trinity College entrance front” (Casey 420). As Christine Casey describes in her book Dublin: The City within the Grand and Royal Canals and the Circular Road with the Phoenix Park,

“[The plan] resulted from an extraordinary sequence of events in 1781-2, which included the foundation of the new Custom House, the securing of funds for the long-awaited eastern bridge and the commissioning of the Lords’ extension from James Gandon. Three years laters the commissioners instructed Thomas Sherrard to consult James Wyatt on the ‘distribution of ground for building from Sackville Street to the College.’ No designs by Wyatt are recorded, but in the following year Gandon prepared unexecuted designs for Sackville Street that proposed a unified elevation with ground-floor shops. Carlisle Bridge was opened to pedestrians in 1792 and in the following year Sherrard was instructed to prepare plans for Westmoreland Street. These too were unexecuted, due to the outbreak of war with France. The situation was resolved in 1799 when the proceeds of a clubhouse tax were allocated to the Commissioners. In that year designs by Henry Aaron Baker were approved and demolition began in the area, described as ‘thickly sown with alleys and courts’. Baker initially proposed a street 60 ft (18.2 metres) wide flanked by terraces with Doric colonnades and arched shop-windows. In the eent the colonnades were omitted and the street gained 30 ft (9.1 metres) in breadth. Building began in 1799 and was complete by 1805” (420).

Casey notes that “[c]ontemporaries complained of the streets’ ‘width…bleakness…gloomy and monstrous aspect’ as compared with traditional shopping thoroughfares such as Grafton Street,” but that “these unified street facades have met with universal acclaim from historians for their functionalism and restraint, which finds parallels in contemporary Parisian commercial design and in the domestic terraces of Adam and Dance” (421). Casey’s description continues with detailed historical architectural information on each structure lining the street.

Westmoreland Street is one of many Dublin Streets named after Lords Lieutenant. The 1892 Dublin Street Names, Dated and Explained lists the street as being named in 1801 after John Fane, 10th Earl of Westmorland and Lord Lieutenant of Ireland from 1790 to 1794 (M’Cauley 141).

The first appearance of Westmoreland Street is in “Two Gallants.” Although the two young men would have walked along the street as part of their route from the north side of the city to the south, and Lenehan would have returned to retrace his steps northward along the same path, the only direct reference to the street is made by an unnamed minor character later in the story. As Lenehan stops to talk with some friends he oncounters at the corner of Dame and George’s Streets, one of them mentions Westmoreland Street, where Lenahan would have been only an hour or two previously:

The party essentially discusses their friend Mac and his presence at two places: last night he was in Egan’s, a pub off of Sackville (now O’Connell) Street just north of the Liffey, and an hour ago he was in Westmoreland Street, which is what O’Connell Street becomes south of the Liffey. Both O’Connell and Westmoreland Street are part of Lenehan’s route though neither are actually mentioned in that context in the story. 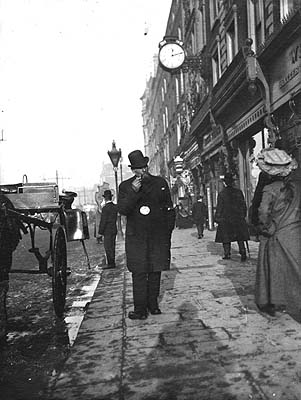 [Cabby walking and smoking pipe outside Nos. 32-33 Westmoreland Street], photographed by J.J. Clarke between 1897 and 1904(?). From the National Library of Ireland’s Clarke Photographic Collection.

The street appears again in “Counterparts,” as it serves as a convenient path for Farrington’s pub crawl. Travelling from Temple Bar to Davy Byrne’s, he must take Westmoreland Street, which is the eastern border of the Temple Bar area, to Grafton Street. As he walks, we are given a description of the bustle along the route:

“In Westmoreland Street the footpaths were crowded with young men and women returning from business and ragged urchins ran here and there yelling out the names of the evening editions. The man passed through the crowd, looking on the spectacle generally with proud satisfaction and staring masterfully at the office-girls. His head was full of the noises of tram-gongs and swishing trolleys and his nose already sniffed the curling fumes of punch” (93).

At this time of day, as Farrington is leaving work, the street, which connects Temple Bar with Dame Street and Grafton Street and O’Connell Bridge, would indeed be filled with Dubliners moving between business, commercial, and residential areas of the city. 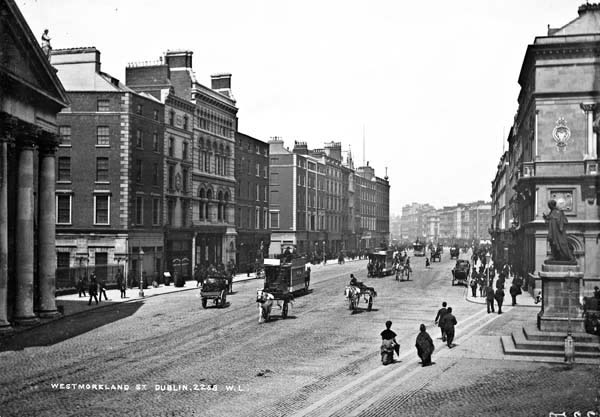 Westmoreland Street, Dublin, photographed by Robert French between 1880 and 1900. From the National Library of Ireland’s Lawrence Photograph Collection.

The final reference to Westmoreland Street appears in “Grace,” a story that clearly contains movement from one the pub to the residence of Tom Kernan, although the route is vague and only indirectly marked by geographical indicators. As the cab carrying a drunk and bloodied Kernan moves away from the bar, it “dr[ives] off towards Westmoreland Street” (153). The bar is located somewhere off of Grafton Street and may very well be Davy Byrne’s, where Farrington has been drinking in “Counterparts.” In any case, Kernan’s northward movement along Westmoreland Street is a reversal of Farrington’s southward path as he is only just beginning his revels.

In general, Westmoreland Street serves as a link from north to south in Dubliners. It’s a bustling yet primarily utilitarian link between settings, a place to see and be seen, alive with motion and the movement of characters. 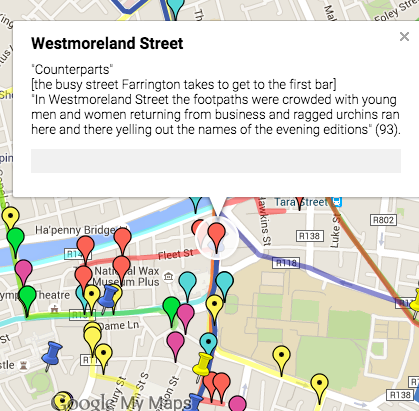 Screenshot from the map showing Westmoreland Street running north and south from the Liffey to the southern edge of Trinity College.