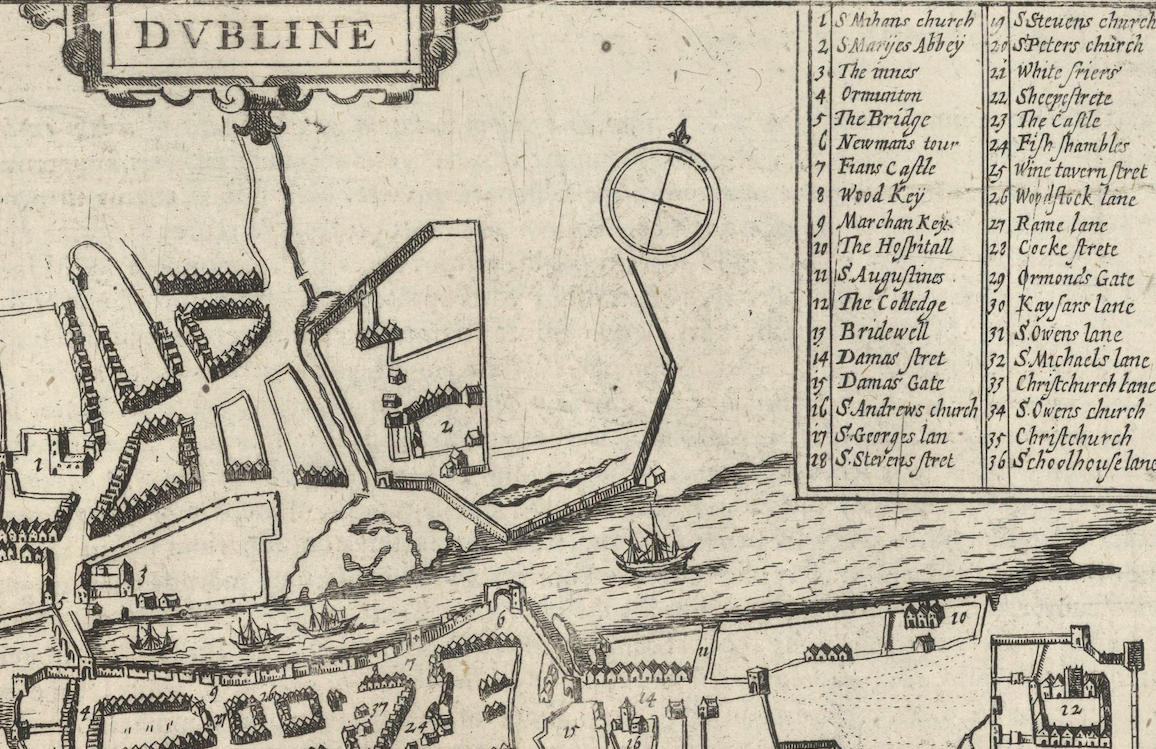 Section of a map of Dublin by Georg Braun published in 1618. St. Augustine’s is represented as no. 11, just above no. 14, Damas (Dame) Street. From the digitized David Rumsey Historical Map Collection. 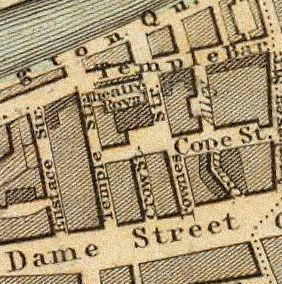 A section of an 1836 map of Dublin by the Society for the Diffusion of Useful Knowledge (Great Britain). Crow Street can be seen just above the “t” of the “Dame Street” label. Map from the digitized David Rumsey Historical Map Collection.

Crowe Street appears in “Grace” as the location of Tom Kernan’s office: “Modern business methods had spared him only so far as to allow him a little office in Crowe Street, on the window blind of which was written the name of his firm with the address–London, E. C.” (154). The street is labeled as “Crow” (no “e”) Street on an 1836 map of the city (pictured left), and C.T. M’Cready’s 1892 Dublin Street Names, Dated and Explained also carries a listing for Crow Street (pictured below) but not Crowe Street. M’Cready notes in the opening of the book that Crow was was the name of a property owner, and it was a common convention to name streets after the families whose property essentially established it as a street. Another source, however, John D’Alton’s History of the County of Dublin, lists Thomas Crowe as sheriff in 1685. M’Cready dates the street naming roughly 75 years after the sheriff of that-name-plus-“e” served as sheriff and ascribes the honor of the commemoration to William Crow, who owned the former monastery nearby. That monastery is labeled but not illustrated on a 1618 map of Dublin (pictured above) by Georg Braun. The earlier map does not show a Crow Street at all, so it seems reasonable to assume that William Crow, not Thomas Crowe, was indeed the namesake for the street. So the question is why Joyce appended an “e” to the name of the street when the street name in all the records was spelled without an “e.”

Screen capture of the Crow Street entry from the digitized Dublin Street Names, Dated and Explained, by C.T. M’Cready, published 1892. 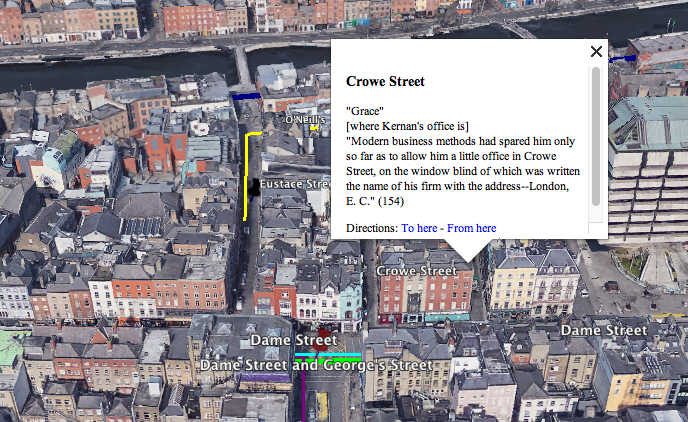 A screen capture from the Mapping Dubliners Project’s Google Earth map version showing Crowe Street and the surrounding overlap of places mentioned and routes depicted in other Dubliners stories.

Crowe (with an “e”), in addition to the name of Dublin’s 1685 sheriff, was a common name in England. One that Joyce may have been acquainted with, by name at least, was the clergyman, poet, and orator William Crowe. It may simply be that Joyce hoped to imbue the name with something more of the English to connote the ever-present yoke of England on Ireland, a theme that is ever-present in the collection but especially in certain stories. Crow/e Street runs north and south from Cecelia Street to Dame Street, just south of the Liffey. It’s in the general area of Temple Bar, placing Kernan in the geographical vicinity of Farrington’s office and pub cluster in “Counterparts” and just off of the Dame Street part of the routes traversed by Chandler in “A Little Cloud” and the group of exuberant young men in “After the Race.” Crowe Street is also not far from where Lenehan comes upon two unnamed friends as he turns south into George’s Street from Dame Street. Each of these stories uses geographical or toponymic signs to connote a kind of frustrated Irishness fueled by the inability of characters to escape their economic situations. These situations are intensified by Ireland’s subordination to Britain’s economy and job market. Farrington works a tedious job under a Northern Irish boss and is snubbed my a London actress; Chandler longs to be published by a London press even if it means playing up his Irishness as a charicature; Jimmy Doyle loses his money to his more cosmopolitan friends at cards; and Lenehan, whose path doesn’t quite reach Crow/e Street, wanders aimlessly while his friend tries to find them some more drinking money. Kernan’s ties are as clear as the lettering on his office window. He works for a London-based company, and even though he isn’t bad off for it, he certainly seems to have problems he needs to drink away.

Whether spelled “Crowe” or “Crow” the imagery is more clear perhaps than the etymology. A carrion bird looms in the location of Kernan’s office. It looms on a corner of Dame Street along the path of the insecure Little Chandler and the soon-to-be broke Jimmy Doyle. Its caws can be heard two blocks away in Eustace Street where Farrington fumes in his boss’s office. And Lenehan avoids its talons by turning south a block and a half before he reaches it. Whether its image or its name or its unifying geography is the sign, the signified seems to be the same. Great Britain’s wealth looms, and the Irish are consciously or subconsciously frustrated.