The Wharf Road appears in “An Encounter” as one of the first streets along the narrator and Mahony’s long route through Dublin the day they skip school in search of adventure. After Mahoney arrives at the Canal bridge where his friend our narrator has been waiting, the two “walked along the North Strand Road till [they] came to the Vitriol Works and then turned to the right along the Wharf Road” (22). Originally, they had “arranged to go along the Wharf Road until [they] came to the ships, then to cross in the ferryboat and walk out to see the Pigeon House” (21), but after they cross the Liffey and wander around Ringsend for a bit, they decide against the Pigeon House. They do trek along the Wharf Road all the way to the river, though, and have several encounters with other children and adults on the way. 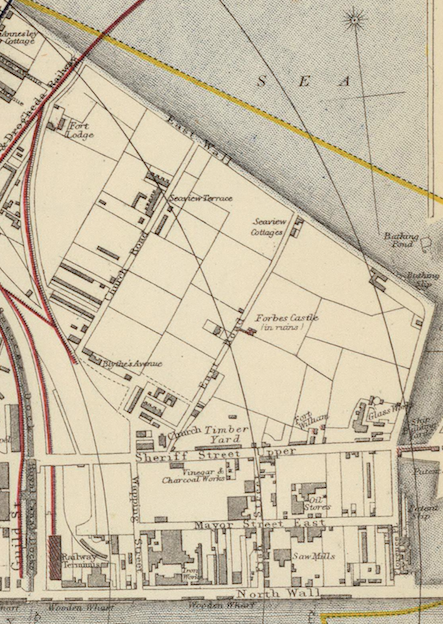 Section of the 1883 Letts, Son & Co. Plan of the City of Dublin” map in David Rumsey’s online map collection. The road bordering the sea is the part of Wharf Road the boys traverse.

The Wharf Road, now East Wall Road, is a road that runs along the top of the wall built to keep the River Tolka on course on its way to the sea so that it doesn’t flood the city’s northern-eastern neighborhoods and industrial complexes. First, on the section of the Wharf Road that runs northwest to south-east, the boys encounter several children. Mahoney plays Indian and “chase[s] a crowd of ragged girls” (22). The boys are then accosted with stones and taunts by two other smaller boys defending the girls. Their siege against the other boys fails and they move on.

The picture, right, shows, toward the top, the part of the road that runs north-west to south-east, and then, along the right edge of the map, the section of the road that runs north and south just before it meets the Liffey. This is the part of the road where the boys begin “walking about the noisy streets flanked by high stone walls, watching the working of cranes and engines and often being shouted at for [their] immobility by the drivers of groaning carts” (22-23). Thus they move from navigating adversarial children to navigating adversarial adults (though they admit they incite the adversity), even before they cross the Liffey into the section of the city where the josser awaits. In this way, the Wharf Road represents a kind of microcosmic progression of the move from childhood to maturity that the story illustrates in a broader sense.

At the same time, the Wharf Road may also represent the technology and ability to control nature. The story contains references to several bodies of water. The canal, first, is a highly controlled body that the boys cross via a bridge. Then they approach the Tolka and stay well above it by way of the massive wall that keeps it en route to the sea. Once they reach the Liffey, larger than the Tolka though also fairly controlled by walls, they traverse it on a ferry, admitting the river a certain level of power not given to the waters they had navigated by dry bridge and road. The sea is described from a safe distance, though with an adventurous mystique as the narrator imagines the vast geography of the world beyond the sea. Finally, the River Dodder, over the ridge of a sloping bank, becomes the setting for the boys’ encounter with the josser. The liquidity that was so controlled and safely distant at the beginning of the story is now more unsuppressed and threatening. The Wharf Road, with its childish games and sturdy stone, even its harmless reprimands from adults, would seem a far safer and more secure location than the unfettered sloping bank of the Dodder with its strange inhabitants.

One Response to Wharf Road