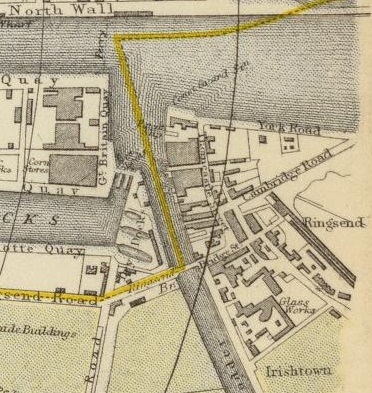 Ringsend is a small suburb of Dublin located on the south shore and east end of the Liffey. It’s where the narrator and Mahony spend the final stage of their school-skipping journey and where they meet the josser. At first, the two only see the area from a distance, from north of the river, which could be interpreted as a safe position compared to the yet unknown dangers that lurk on the other side:

“We pleased ourselves with the spectacle of Dublin’s commerce — the barges signalled from far away by their curls of woolly smoke, the brown fishing fleet beyond Ringsend, the big white sailing vessel which was being discharged on the opposite quay” (23).

At this moment Mahony, anticipating “Eveline’s” Frank, gets the idea to “run away to sea on one of those big ships.” And anticipating the effects of the largeness of the world on Eveline, the narrator “[sees], or imagine[s], the geography which had been scantily dosed to [him] at school gradually taking substance under [his] eyes.” Though this sentiment isn’t expressed directly in “Eveline,” her paralysis on the North Wall is certainly due to the substantial geography swirling in her mind when her imagined travels present themselves as impending reality.

In “An Encounter,” the boys do board a boat, albeit a simple ferry to the other side of the river. Once there, they watch the sailors for a while before continuing their travels:

“When we were tired of this sight we wandered slowly into Ringsend” (23).

The original plan had been to take the South Wall all the way out to the Pigeon House, but by the time they spend their money in Ringsend on biscuits, chocolate, and raspberry lemonade and chase a cat through a lane and into a field, they decide to just plop down on a sloping bank and watch the Dodder flow by. This is where they encounter the strange man who casts an unexpected shadow over their adventures.

While Ringsend itself is nonthreatening and rather mundane, because of its position across the river, it represents an unfamiliar and rather adult world. As with “Araby,” which also ends on the south side of the Liffey, the ending of “An Encounter” suggests a foray into adolescence, one that is not followed by an actual return home (though one is suggested) to the safer north bank. Incidentally, Araby would have been only slightly south of the boys’ position at the end of “An Encounter,” and the train they would be taking home would be the same one the narrator of “Araby” would take to get home from the bazaar.