Although the word “water” is only mentioned once, there is a kind of fluidity seeping through the landscape of “An Encounter.” Based partly on an experience shared by James Joyce and his brother Stanislaus, the story chronicles a day’s truancy for the narrator and his friend Mahony who, instead of going to school, wander Dublin, observing the city’s workers, non-school-going children, and eventually its seedier inhabitants as represented by the josser. 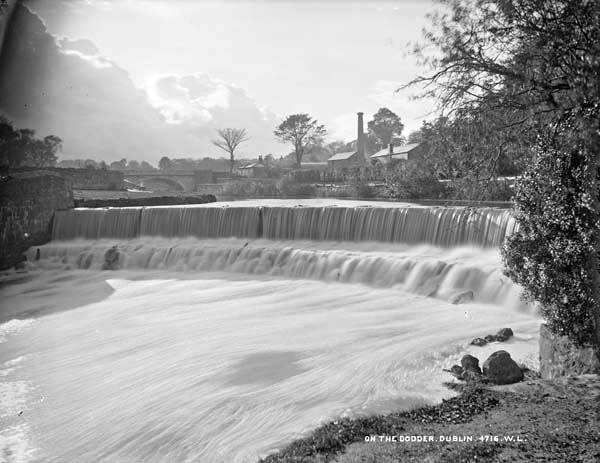 [The Dodder River, Dublin], photographed by Robert French between 1880 and 1900, made available by the National Library of Ireland as part of the Lawrence Photograph Collection.

Over the course of their journey they encounter several bodies of water, including the three largest rivers in Dublin: the Liffey, the Tolka, and the Dodder. The boys start at the Royal Canal, which runs around the city’s general perimeter north of the Liffey. Then they walk up to the Tolka and follow its south bank until they reach the area of the Liffey ‘s docks. The Tolka issues into the Dublin Bay north of the Liffey, but the boys turn southward toward the larger river. They cross the Liffey on a ferryboat, the narrator gazing out toward the Irish Sea, and then wander through Ringsend, finally settling on a sloping bank near the Dodder:

“We both felt rather tired and when we reached the field we made at once for a sloping bank over the ridge of which we could see the Dodder” (24).

The Dodder happens to figure rather erotically in Joyce’s own experiences with Nora, explains Chester Anderson in his “Joyce’s Letters and His Use of ‘Place’.” According to letters, Joyce questions Nora about her relationship with a friend of his whom she “went with…down to the bank of the Dodder.” Joyce then demands:

Anderson notes also that “in one of the portions of the letter of December 3, 1909, which is not printed in Ellmann’s text, Joyce writes in great detail (in order to excite himself and Nora) about their first sexual act five years before ‘at Ringsend,’ when, he says, he ‘came off’ through her fingers” (qtd. in Anderson 69). Anderson even suggests that “the ‘queer old josser’ (pidgin English for God) is both the Dublin god and one image of the self of the narrator as he might become in Dublin.”

Thus, a story that begins as a partial reference to Joyce’s childhood ends with a much more maturely tinged reference to his sexual life. This autobiographical fluidity of reference adds yet another example of the transition from childhood to adolescence which already figures in the story. And geographically, the transition takes the form of waters flowing toward the Liffey: the Royal Canal from the north side of the Liffey, where all the childhood stories take place or at least begin, and the Dodder from the south, where childhood innocence is challenged by  less familiar images and ideas, in this story as well as in “Araby.”

2 Responses to The Dodder