Erected in 1809 to commemorate Vice Admiral Horatio Lord Nelson, and destroyed 157 years later, Nelson’s Pillar was located, in Joyce’s day, right in the middle of Sackville Street (now O’Connell Street). It stood in the center of the intersection of that main thoroughfare and Henry and Earl Streets. “The Pillar,” as it was also called, appears in Dubliners as a point of reference for the middle of Maria’s route in “Clay:” 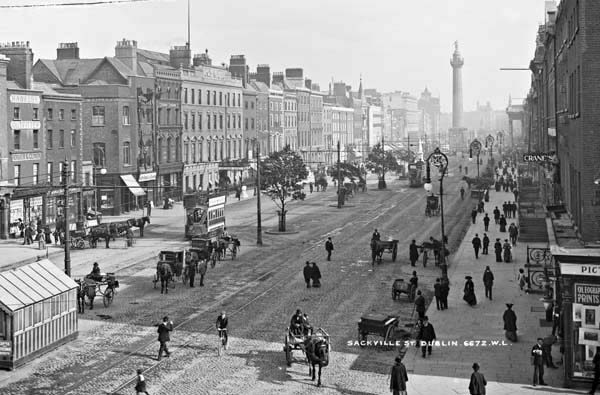 Sackville Street, Dublin, showing the Gresham Hotel and Nelson’s Pillar, photographed by Robert French between 1903 and 1908. From the Lawrence photograph Collection at the national Library of Ireland.

The Pillar is a convenient midpoint to her journey, not only because it is located near the cake shop she plans to visit but also because it is a point of intersection for several tram routes, as evidenced in the high traffic depicted in the photo above and in Ulyssese’s “Aeolus” episode where a “hoarse Dublin United Tramway Company’s timekeeper bawl[s]” off tramline destinations (U 7.4-5). The first tram Maria takes, from the southeastern Ballsbridge neighborhood to Dublin city center, lets her off right at the Pillar:

“She got out of her tram at the Pillar and ferreted her way quickly among the crowds” (102).

She first goes east into Earl Street, where Downes’s is located then crosses back west past the pillar (though it isn’t mentioned explicitly) into Henry Street where she buys the plumcake. She returns back to the Pillar (again, not mentioned) to board the Drumcondra tram, where she meets a “colonel-looking gentleman” who offers her his seat. And watching over all of the movement is the Vice Admiral Nelson on his pillar. Perhaps the drunk yet chivalric gentleman in the tram is meant as a kind of lower-ranking Army-branch counterpart to the problematically glorified Royal Navy officer. 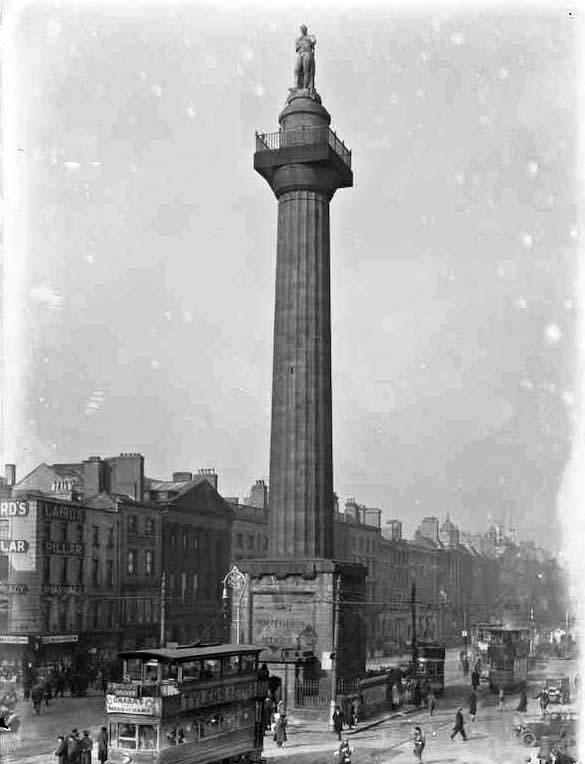 Nelson’s Pillar, with a tram, O’Connell Street, Dublin City, Co. Dublin, published between 1900 and 1939. From the Eason Collection at the National Library of Ireland.

The memorial to Nelson was one of many that went up around Britain after his death during the Battle of Trafalgar, regarded as “Britain’s greatest naval victory” and the “most decisive naval victory of the [Napoleonic] war.” And while leading up to its unveiling, the Dublin populous seemed either apathetic or supportive of the gesture, once it took its place in the heart of the city, criticism ranged from snarky to impassioned. Andrew Thacker highlights some of the responses in  his book Moving Through Modernity: Space and Geography in Modernism in which he points to an 1809 attack in Irish Magazine that argues “our independence has been wrested from us, not by the arms of France, but by the gold of England” (qtd in Thacker 122). The controversy raged into the twentieth century, and well after the publication of Dubliners. In 1923 W.B Yeats acknowledged its historic and aesthetic value but also admitted “it is not a beautiful object” (qtd in Thacker 123). Thacker also points out that the monument, situated as it is in the center of the city, “inserts Dublin deep within the colonial space of the British capital, the heart of which is often seen as Trafalgar Square with its Nelson’s Column” (120). He furthermore observes “[t]he metropolitan centre of Ireland is thus, paradoxically, not an Irish centre; or to adopt a phrase from Derrida, the centre is not the centre: the Irish metropolis has its governmental centre in London.” 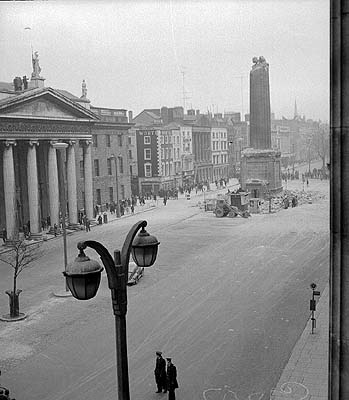 [View of Nelson’s pillar following the bombing], by Independent Newspapers, 1966. From the National Library of Ireland.

Indeed, the monument does stand in “Clay” at the intersection of religion and economics, both appendages of Britain’s reach in Ireland. Maria’s route from Ballsbridge to Drumcondra, with its pause in the center “to buy the things” forms the shape of a cross. But unlike the sign of the cross whose motion from top to bottom symbolizes Christ’s descent from heaven to earth, Maria moves upward, northward toward Joe’s house, ascending to either her inevitable death as pronounced by the clay she touches or her inevitable entering of the convent as indicated by the prayer-book she chooses on the do-over. Whatever her fortune, her ascension is bisected by her economy. As a person who appreciates “how much better it was to be independent and have your own money in your pocket,” she makes wise purchases (102). Instead of wasting money on one of Downes’s scantily frosted plumcakes, she crosses past the Pillar to buy a cake with more icing on it. But her cross made over the Pillar ends badly when she leaves her prize plumcake in the tram. The whole movement, a sign of the cross over the monument, seems an ironic and ambulatory version of a people’s misplaced reverence for a British Vice Admiral whose victory partially and indirectly won Ireland at least another century of dependence on Britain.

Joyce didn’t live to see the eventual destruction of the monument, which happened in 1966. Just before the 50-year anniversary of the 1916 Easter Rising, a Republican group blew up the pillar, destroying the statue of Nelson at the top and leaving the doric column essentially decapitated. As a result of the attack, the remainder of the monument was removed. That year, “[t]he St Patrick’s day parade and the Easter Rising jubilee celebrations,” according to one historical account, “took place with no Horatio Lord Nelson, Duke of Bronti, viewing them with a jaundiced eye from his column aloft.” And Thacker notes the headline in the March 8, 1966 Irish Times read “NELSON DEFEATED IN THE LONG RUN. ABUSED FOR 157 YEARS” (qtd. in Thacker 122). Today, the Spire, a comparatively apolitical and abstract sculpture, stands where the Pillar once was.