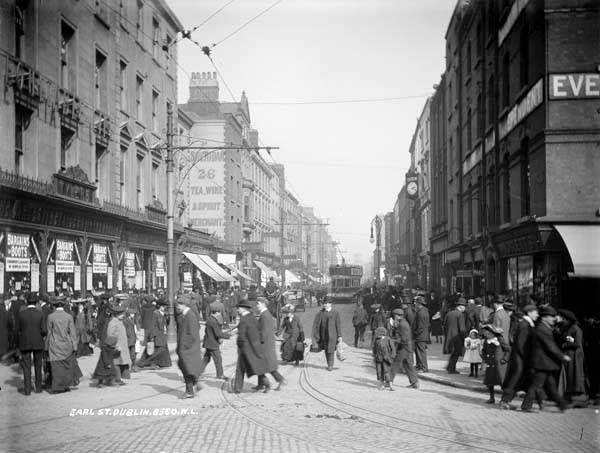 Earl Street is situated on the north side of the Liffey in the heart of Dublin. It runs from O’Connell Street on the west to Marlborough Street on the east. The street is mentioned in passing by Corley in “Two Gallants:”

“She’s on the turf now. I saw her driving down Earl Street one night with two fellows with her on a car” (53).

Corley is referring to an old sweetheart who he recalls “was…a bit of all right.” She had been, apparently, the only girl Corley ever “got [anything] out of,” and he mentions her “regretfully” when he speaks of her to Lenehan.

That “[s]he’s on the turf now” essentially means she’s a prostitute, and as it happens, Earl Street is only a couple blocks away from what was, in Joyce’s day, the red light district. Called “Monto,” short for Montgomery Street which was the heart of the district, the area features famously in the Circe episode of Ulysses. If Corley’s friend was on a car with two gentlemen heading east on Earl Street, she may very well indeed have been heading for the Monto.

One other Dubliners character visits Earl Street, though the street’s name is never mentioned. Maria, in “Clay,” breaks up her trip to Joe’s by stopping at the Pillar so she can “ferret” into Downes’s cakeshop for penny cakes (102). She isn’t able to buy plumcake there, so she heads back west up Earl Street (the opposite direction of Corley’s friend) to cross O’Connell Street and see if she can find plumcake in Henry Street.

Maria’s trajectory along Earl Street is in opposition to Corley’s girlfriend-turned-prostitute, and the fact that she’s buying cakes instead of riding on a car with not just one but two men, speaks to what decisions she may have faced and made regarding relationships and vocation. Did she ever go out with a Corley? Is she a version of one of the many girls Corley went with who didn’t give him anything in return for “tak[ing] them out…on the tram somewhere and pay[ing] the tram or tak[ing] them to a band or a play at the theatre or buy[ing] them chocolate and sweets or something in that way” (52)? The visual cartographic aspects of the two women’s routes adds yet another layer to the divergence of life paths and possible timelines that so many of the characters of Dubliners are faced with.

It may also be worth noting that Earl Street is the location of the famous “Prick with the stick” statue of James Joyce.

Statue of James Joyce in Earl Street. Nicknamed by locals “Prick with a Stick,” the statue was erected in 1990.

One Response to Earl Street