“Eveline,” a story with only three specific references to Dublin locations, contains a total of ten geographical references. The remaining references span four continents, a scale that ultimately renders Dublin very small indeed, if not altogether constricting. Eveline is surrounded by reminders of her potential escape, from the world traveller Frank himself, to the new development across the street, which recalls friends long since departed for England, to the “yellowing photograph” of her father’s friend the priest who “is in Melbourne now” (37). 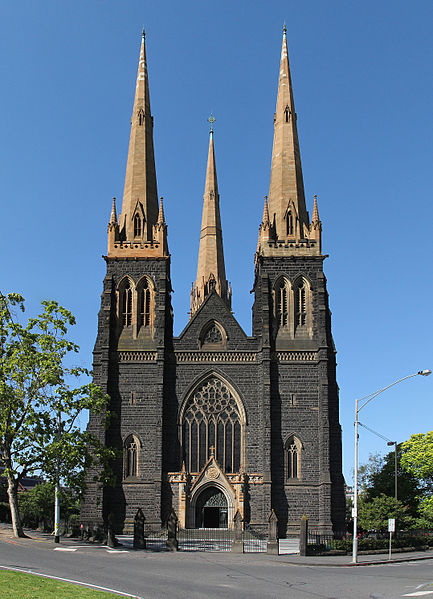 St. Patrick’s Cathedral, the first Catholic church in Melbourne, Australia. Construction of the cathedral began in 1958, and though the nave was completed within ten years, the rest of the structure was only finally completed in 1939.

Melbourne, in Victoria, Australia, is even further away from Dublin than Buenos Ayres. But like Buenos Ayres, it was seeing a boom of Irish immigration during the later half of the nineteenth century. Prior to this period, many of those who embarked on the journey to Australia were prisoners, sailing for the many penal colonies on the far-away continent. Some of these prisoners were even Irish priests, implicated in crimes ranging from murder to support of the 1798 rebellion. Three priests in particular were sent as convicts to the penal settlements: Fathers Dixon, Harold, and O’Neill. O’Neill, who had been falsely accused of murder, was released and returned to Ireland when his innocence was demonstrated in less than month, and the other two were released in 1803 and allowed to “exercise [their] clerical functions” in Australia, “a place,” according to James Francis Hogan in The Irish in Australia, “where they were so sadly needed” (228).

Patrick Bonaventue Geoghegan, from Dublin, was the first resident priest in Melbourne and became the second Bishop of Adelaide after his predecessor Francis Murphy (Hogan 254). Murphy and Geoghegan were two of many priests, along with James Goold, appointed the first Bishop of Melbourne in 1848 and responsible for the establishment and building of St. Patrick’s Cathedral in Melbourne, who were recruited by Dr. William Ullathorne, English Catholic prelate, who wrote The Catholic Mission in Australasia (London, 1837) and made it his mission to strengthen the Catholic clerical presence there. Most of his success was with the Irish rather than the English, however, leading him to feel that “ecclesiastically Australia must become a colony of Ireland.”

But these first Catholic priests in Australia were too old to be “school friend[s]” of Eveline’s father. By Eveline’s father’s coming of age, priests were not only increasingly welcome in Australia; many were eagerly volunteering to dedicate their lives to serving a growing Irish and Catholic population in what was then termed “the antipodes.” A pastoral letter of 1885, composed by the “Bishops of Australasia,” summarized the state of their faith in that place thusly:

“At a date so recent as to be quite within the lifetime of men still moving among us, there was not one priest, or one single altar, in all these southern lands.” (qtd. in Hogan 263)

But by 1885 that all had changed as result of men like the one in the yellowing photograph who fought the apparent discrimination against Catholicism to erect a thriving institution. By 1888, when Hogan’s account was published, “the priests in the colonies number[ed] several hundreds; the churches [we]re among the most beautiful in Christendom…Such a contrast between the beginning and the close of a century is unexampled in history” (264).

One Response to Melbourne