This week’s featured place is Marlborough Street, where Mrs. Mooney of “The Boarding House” plans to attend mass after her confrontation with Bob Doran: “It was seventeen minutes past eleven: she would have lots of time to have the matter out with Mr. Doran and then catch short twelve at Marlborough Street” (64). “Short twelve” refers to noon mass, and even though the church is never directly named, Mrs. Mooney would have been attending Marlborough Street’s St. Mary’s Pro-Cathedral, officially the “first Catholic episcopal seat established anywhere in the United Kingdom of Great Britain and Ireland since the Protestant Reformation,” according to the detailed Wikipedia entry. 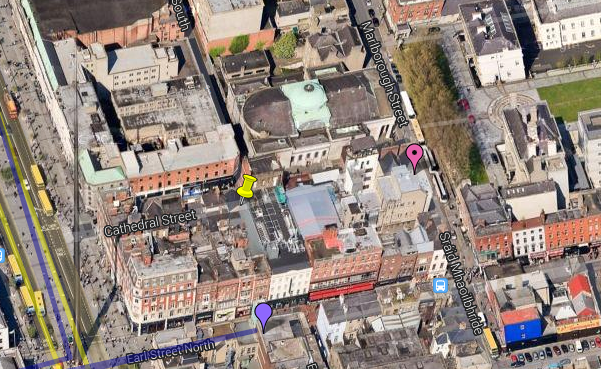 St. Mary’s Pro-Cathedral at Marlborough and Cathedral Streets from the Google map version of the Mapping Dubliners Project. Also visible to the south is the marker for Earl Street.

The cathedral’s official web site also provides a rich history of not only the cathedral itself but also of the turbulent political circumstances that led to its institution. The cathedral was finished in 1825 soon after the Penal Laws forbidding the building of Catholic churches dissipated. As Catholicism is closely tied to Irish Nationalism, the pro-cathedral carries connotations of open protest to the Churches of England and Ireland which were symbols of English rule. It’s fitting, then, that the pro-cathedral is also referenced in “A Mother,” in relation to the the Kearney family who are active in the Irish Revival: “On special Sundays, when Mr. Kearney went with his family to the pro-cathedral, a little crowd of people would assemble after mass at the corner of Cathedral Street” (137). St. Mary’s Pro-Cathedral is indeed located at the corner of Marlborough and Cathedral Streets. Though Irish politics is an explicit theme in “A Mother,” it is perhaps less explicit in “The Boarding House,” making the somewhat hidden reference to the pro-cathedral in that story worthy of more study.

Incidentally, to add a musical element to this geographic reference, John McCormack, the oft-referenced tenor in Joyce’s works, was a member of the cathedral’s Palestrina Choir in 1904 and 1905. This connections provides perhaps a bit more fodder for those interested in the performative or musical elements of both these stories.