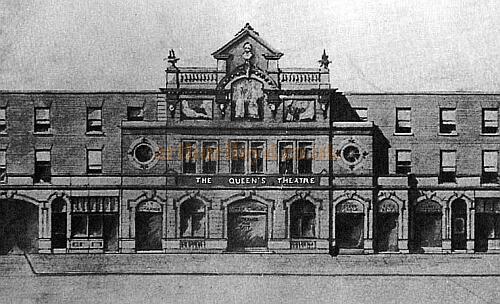 Queen’s Theatre as depicted on a postcard featured on http://www.arthurlloyd.co.uk/Dublin/QueensTheatreDublin.htm with credit given to Ken Finlay.

The Queen’s Royal Theatre, which operated from 1844 to 1907 and 1909 to 1969, appears in “A Mother” as a venue where one of the artistes once performed. The theatre, often called simply the Queen’s Theatre or the Queen’s, was characteristically known as a venue for comic and musical acts. It was one of several popularly attended theatres in Dublin during this period and was located near the Antient Concert Rooms, at 209 Great Brunswick Street (now Pearse Street). The reference to The Queen’s Theatre occurs while Kathleen Kearney and her parents are at the Antient Concert Rooms on the final night of the grand concert series. As Kathleen is preparing for her performance as accompanist for the various singers, her mother confronts the managers of the concert about her daughter’s promised compensation. When Mrs. Kearney is unable to find either Mr. Holohan or Mr. Fitzpatrick, the show’s organizers, she returns to the dressing room as the artistes are arriving:

“The artistes were arriving. The bass and the second tenor had already come. The bass, Mr. Duggan, was a slender young man with a scattered black moustache. He was the son of a hall porter in an office in the city and, as a boy, he had sung prolonged bass notes in the resounding hall. From this humble state he had raised himself until he had become a first-rate artiste. He had appeared in grand opera. One night, when an operatic artiste had fallen ill, he had undertaken the part of the king in the opera of Maritana at the Queen’s Theatre. He sang his music with great feeling and volume and was warmly welcomed by the gallery; but, unfortunately, he marred the good impression by wiping his nose in his gloved hand once or twice out of thoughtlessness. He was unassuming and spoke little. He said yous so softly that it passed unnoticed and he never drank anything stronger than milk for his voice’s sake” (142).

Don Gifford describes the Queen’s Theatre as a kind of catch-all venue for acts that didn’t quite fit the Theatre Royal’s usual “dramatic presentations” or the Gaiety’s “socially prominent musical events” (Gifford 99). The theatre apparently resisted being called a music hall, though, as evidenced by an 1875 clipping from the Era Almanack, pictured below.

An entry in the 1885 Era Almanack describing the Queen’s Theatre. Image from http://www.arthurlloyd.co.uk/Dublin/QueensTheatreDublin.htm with credit to the Sensation Press.

The theatre was built in 1844 on the site of the former Adelphi Theatre and, according to Archiseek, rebuilt in 1909 by R.J. Stirling. According to another history, one that focuses on the theatre in the context of the “popular and immensely successful song writer, composer, playwright, comedian, and Music Hall performer” Arthur Lloyd, the theatre was remodeled in 1893 as well. Since the stories of Dubliners all take place around the turn of the century, and Mr. Duggan is described as a young man, we can conceive that his role in Maritana is somewhat recent and thus perhaps after the 1893 remodeling. Perhaps the production was an attempt by the theatre at more dramatic or serious fare than its usual farces, comedy acts, pantomimes, music hall performances, and “melodramatic fare” that Joyce loved as much as his operas and serious concerts (Foster 149).

A more intriguing possibility is that Joyce is placing in this story an ironic reference to a very different kind of performance. According to Allardyce Nicoll’s A History of Late Nineteenth Century Drama, the Queen’s Theatre in Dublin put on a production of Miss Maritana, a burlesque opera by Lieutenant George Nugent and J.W. Whitbread, who co-managed the theatre, on April 21, 1890. The reference to this burlesque revisioning of William Vincent Wallace’s dramatic opera would indeed be a clever–though, for Joyce, not wholly insulting– jab at the self-envisioned serious artistes of Mr. Holohan’s failed grand concert series. Together with the mousy and unknown London-based Madam Glynn, the jealous and nervous bronze-medal-winning Mr. Bell, and the apparently gullible Kathleen Kearney, the burlesque opera star is in appropriate company. Indeed, reading the reference to Maritana in combination with the reference to the comparatively misfit Dublin theatre, we can find yet another instance of Joyce’s lens of scrupulous meanness sustained in every layer of this story.

In 1969, the theatre, like many Dublin theatres, was demolished. 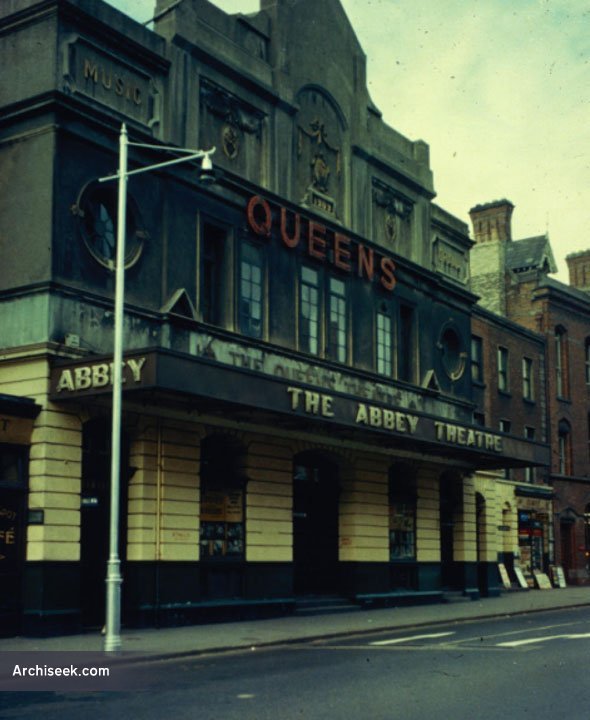 Queen’s Theatre, after it became home to the Abbey Theatre Company in 1951. Image from Archiseek.

One Response to Queen’s Theatre