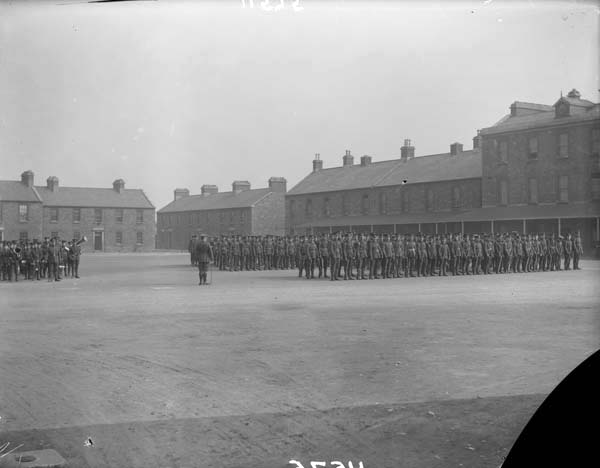 Inside of the Beggars Bush Barracks, which was located at the corner of Shelbourne Road and Cranmer Place, photographed by Robert French between 1865 and 1914. From the National Library of Ireland’s digitized Lawrence Photograph Collection.

Shelbourne Road, located in the southeastern suburban part of Dublin, is referenced in “Counterparts” as the place where Farrington exits the tram on his way home. He has just finished his frustrating impromptu pub crawl, and now, out of money and “full of smouldering anger and revengefulness” (96), he makes his way to his home through what Don Gifford describes as “a district of lower-middle-class homes and tenements” (76).

“His tram let him down at Shelbourne Road and he steered his great body along in the shadow of the wall of the barracks. He loathed returning to his home” (97).

The tram he takes home serves the same or a similar route to the one Maria might travel in the next story to get home to Ballsbridge from her brother Joe’s house in Drumcondra. An 1883 map, a segment of which is pictured below, shows the tram routes as blue lines. Though the map omits the eastern part of the route, it appears that the tram would have turned left into Cranmer Place as it headed southeast out of the city center and then made its way back toward the city through Ballsbridge along Northumberland Road. Farrington exits at Shelbourne Road which is the first major intersection after the tram turns into Cranmer Place. He then walks southeast towards his house which, according to this map, could be located in or around Landsdowne Road. 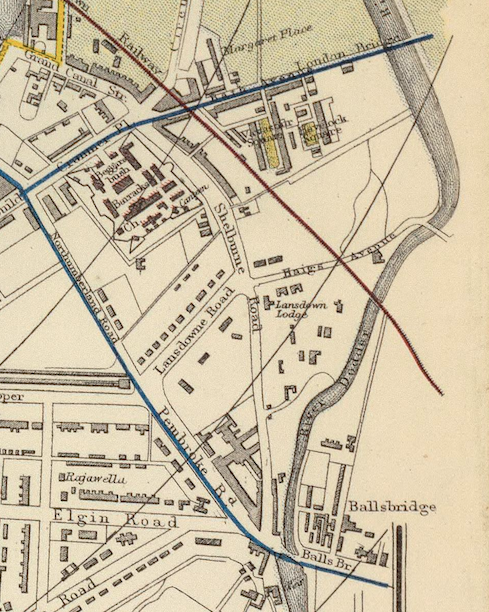 Shelbourne Road is, according to C.T. M’Cready’s 1892 Dublin Street Names, Dated and Explained, one of many Dublin streets named after noblemen (vii). M’Cready explains the street was named for William Fitzmaurice, 2nd Earl of Shelburne and Marquis of Landsdowne. And prior to the tribute to the Earl of Shelburne, the street was known as Artichoke Road and Great-Britain Quay (117).

Farrington’s walk down Shelbourne Road takes him past the Beggars Bush Barracks, and the text does indeed acknowledge that “his great body” moves under “the shadow of the wall of the barracks” (97). Until it was transferred to Michael Collins in 1922, the barracks belonged to the British Army. There is a kind of sinister aggression connoted in the shadow of the barracks, and its implications only further fuel the aggression also building in Farrington as he gets closer to his house and the son he will eventually assault. Much of Farrington’s rage, in fact, seems a kind of subconscious response to British occupation. His economic state and position as a scrivener to a “north-of-Ireland” solicitor, his being snubbed by the attractive London woman, and his recent loss at arm wrestling to a possibly English Weathers (who complains at one point that the party’s “hospitality was too Irish” []) all contribute to Farrington’s growing frustration. The British military barracks occupying the corner of his neighborhood, on a street named after a British earl, would only add to his sense of oppression, and the story ends with him ultimately reacting in kind by bullying someone in a position of dependence upon him.

One Response to Shelbourne Road