The Antient Concert Rooms, located at 52 Great Brunswick Street (now Pearse Street) from 1842 to 1921, is the primary setting in “A Mother” and is mentioned again briefly in “The Dead.” 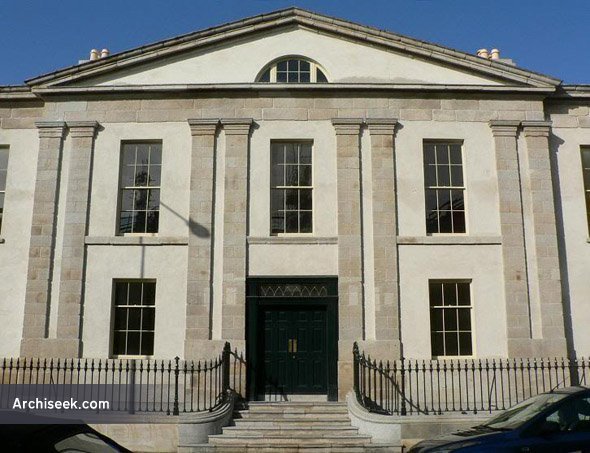 In “A Mother,” Mrs. Kearney is unsurprised when her daughter’s skills as an accompanist are solicited by Mr. Holohan for “a series of four grand concerts which his Society was going to give in the Antient Concert Rooms” (138). This type of series would have been a typical event at the Concert Rooms, and Joyce himself even performed there in a similar program. The Concert Rooms are also used by Mary Jane in “The Dead” as the venue for her annual pupils’ concert: “She had been through the Academy and gave a pupils’ concert every year in the upper room of the Antient Concert Rooms” (176). 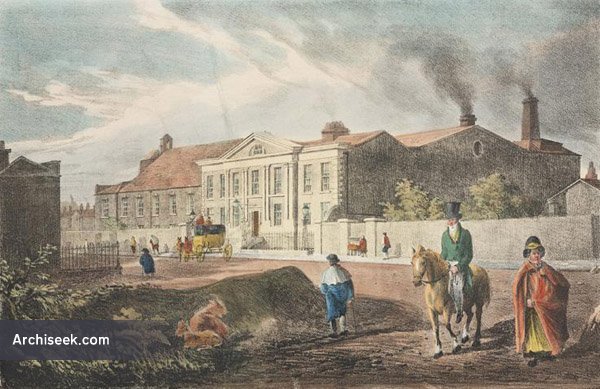 Before the Antient Concerts Society inhabited the premises, it was the home of the Dublin Oil Gas Light Company. Although the premises at 52 Great Brunswick Street was acquired by the Society (for which the venue is named) in 1842, the first performance at the location was not until 20 April, 1843. In his historical account of the society and its role in establishing the venue, Patrick J. Stephenson cites a notice and report of the events:

“‘ANTIENT CONCERTS. OPENING of THEIR NEW Rooms, GREAT BRUNSWICK STREET. The Committee request that all parties attending the Oratorio This Evening, will proceed by Brunswick-street, in order that the Carriages may set down with the horses’ heads towards Westland-row.’

A big attendance was expected and, judging by the Press reports, the committee were not disappointed. The report of the concert published by the Dublin Evening Mail reads as follows:

‘The members of this select and spirited society opened their new rooms in Great Brunswick-street, yesterday evening [2o April] to a large number of their friends, in a style creditable alike to themselves and to Dublin. The building is still in an unfinished state, owing to the short time that has elapsed since the works were commenced ; but when completed, will not be inferior, for the purposes for which it was constructed, to any other in Europe.

The principal room (in which the concert was given is in the Ionic style, and beautifully proportioned, being nearly a double cube of 43 feet, or 86 feet long, exclusive of the recess for the organ at the back of the orchestra, and it is calculated to accommodate between goo and i000 persons. At the extremity of the hall, and facing the orchestra, supported on metal pillars, is a light looking elliptical gallery, capable of holding two hundred persons. The massive scroll brackets, supporting the gas pendants, from the foundry of Mr. William Robinson, are particularly elegant, and the. remainder of the fittings for the lighting, by Milner and Co., of Fleet-street, are equally so. The room, besides being lofty, is well ventilated by admitting warmed or cold air diffusedly round the bottom of the room, and carrying off the foul air through ornamental openings in the ceiling, and thence, by inverted funnels in the roof, out of the building.

The The seats are supported on light-looking cast iron framing with scroll arms, and backed with mahogany, affording altogether a degree of comfort that was not known in any music-room in Dublin before. We may fairly say that when the seats are cushioned, a new organ put up, and the painting and decorations completed, it will display an appearance presenting architectural beauty, combined with comfort, such as no other hall in this country possesses, and will reflect the highest credit on the committee of the society by whom the work has been designed, and under whose inspection it has been executed.” (qtd. in Stephenson 6-7)

Stephenson provides the entire report, which continues with an account of the performances and attendees and ends with the summation, “A good concert room” (8). Throughout the years, many different musical societies utilized the Antient Concert Rooms, and the initial format for concerts, which had been “first, a short or shortened major work, such as Haydn’s ‘Seasons’, Mozart’s ‘Requiem’, Spohr’s ‘Cruci fixion’ or Handel’s ‘L’Allegro’; second, a series of songs, glees, madrigals, duets, and quartettes,” gave way to any number of program arrangements (8). The subject of concerts also changed. Originally, “[t]he first part had, as a rule, a marked sacred or religious character, and the second a profaner or lighter tone” (8). By Joyce’s time, the Rooms were not only a place to hear concerts but also the venue for events like “the spectacular Dawson-Stevenson billiards match” which took place in May and June of 1904, just a couple months before James Joyce sang there as part of the six-day Irish Revivals Industries Show (Simpson). He performed solo on the 24th and “alongside the celebrated John McCormack in the Grand Irish Concert on the Saturday evening (27 August),” as John Simpson notes in his thorough annotation of the Antient Concert Rooms as referenced in Ulysses. Incidentally, when the place is referenced in Ulysses, it’s as Bloom is on his way to Paddy Dignam’s funeral. As he looks out the window of the cab, he notes “Antient concert rooms. Nothing on there” (U 6.180).

Tagged with: a mother • the dead

One Response to Antient Concert Rooms