Star of the Sea Church

By Jasmine Mulliken
This week’s featured place, The  Star of the Sea Church, appears in “Grace” as the place where the Kernans were married:

“In her days of courtship, Mr. Kernan had seemed to her a not ungallant figure: and she still hurried to the chapel door whenever a wedding was reported and, seeing the bridal pair, recalled with vivid pleasure how she had passed out of the Star of the Sea Church in Sandymount, leaning on the arm of a jovial well-fed man, who was dressed smartly in a frock-coat and lavender trousers and carried a silk hat gracefully balanced upon his other arm” (156).

The description of Mr. Kernan as “not ungallant” recalls the story “Two Gallants” and suggests an association between the once “jovial well-fed man” in “Grace” and the “squat and ruddy” Lenehan with his “eyes, twinkling with cunning enjoyment” and “his figure [which] fell into rotundity at the waist” (49-50). Possibly an older version of Lenehan, Mr. Kernan is, although older and a father, not necessarily much more mature. But while his story begins with him on the floor of a bar, he returns in the end to another church in Gardiner Street, a geographic reference that connects him with the parents of Joe Dillon in “An Encounter.” 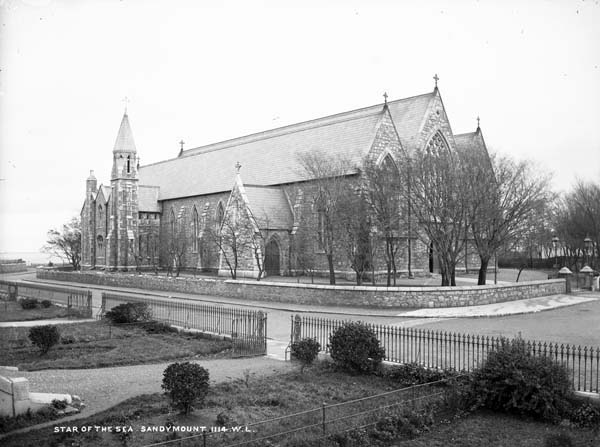 Star of the Sea Church from the National Library of Ireland’s digital photograph collection.

The Star of the Sea Church, pictured right in a photograph taken between 1880 and 1900, stands only a few blocks from Irishtown, where the priest of “The Sisters” had grown up. Perhaps Father Flynn attended mass at Star of the Sea as a child. The proximity revealed by the map’s visual interface invites scrutiny into other connections between “Grace” and “The Sisters” and the characters of Flynn and Kernan. While Flynn is hinted to have experienced a kind of fall from grace, Kernan shows signs of redemption “with God’s grace” (174). Viewed in the light of Father Flynn’s troubles, the effectiveness of Kernan’s redemption must be questioned if the vehicle of his redemption is supposed to be Father Purdon, another priest. At the very least, because of what Joyce sets up in “The Sisters,” we have to wonder whether Kernan’s redemption by the grace of God represents a hopeful ending to the story or a piercing, ironic criticism of the church. Is Kernan merely replacing one drug with another when he transforms from the drunk at the bottom of the stairs to the mathematical parishioner on the church bench?

Even though the Catholic church is always problematic in Joyce’s writing, the physical structure of the place in the landscape, its architecture, its design, its music, usually appears in Joyce as something reassuring. The Star of the Sea Church is a memory in “Grace,” a memory that clashes with the cold reality of married, mature life. When mentioned in Ulysses, the church is again placed in a context of solidity and comfort, as “a beacon ever to the stormtossed heart of man, Mary, star of the sea” (U 284).

“Far away in the west the sun was setting and the last glow of all too fleeting day lingered lovingly on sea and strand, on the proud promontory of dear old Howth guarding as ever the waters of the bay, on the weedgrown rocks along Sandymount shore and, last but not least, on the quiet church whence there streamed forth at times upon the stillness the voice of prayer to her who is in her pure radiance a beacon ever to the stormtossed heart of man, Mary, star of the sea” (U 284/13.2-8).

“He watched sleepily the flakes, silver and dark, falling obliquely against the lamplight. The time had come for him to set out on his journey westward. Yes, the newspapers were right: snow was general all over Ireland. It was falling on every part of the dark central plain, on the treeless hills, falling softly upon the Bog of Allen and, farther westward, softly falling into the dark mutinous Shannon waves. It was falling, too, upon every part of the lonely churchyard on the hill where Michael Furey lay buried. It lay thickly drifted on the crooked crosses and headstones, on the spears of the little gate, on the barren thorns. His soul swooned slowly as he heard the snow falling faintly through the universe and faintly falling, like the descent of their last end, upon all the living and the dead” (D 223-24).

One Response to Star of the Sea Church