Father Flynn’s death notice reveals that he had been parish priest at St. Catherine’s Church in Meath Street:

“Two poor women and a telegram boy were reading the card pinned on the crape. I also approached and read:

The reading of the card persuaded me that he was dead and I was disturbed to find myself at check” (12).

The church is, of course, a Catholic church, and though it is on the site of a previous cathedral, the new church that took its place had only been completed as it would have appeared in the context of the story in 1857. It’s possible, then, given that he had been living with his sisters for several years since “something queer came over him,” that Father Flynn could have been its first priest (16). According to several editions of the Irish Catholic Directory and Almanac between 1858 and 1904, there were only two head parish priests in St. Catherine’s between the time the church was dedicated in 1858 and Father Flynn’s death in 1895. 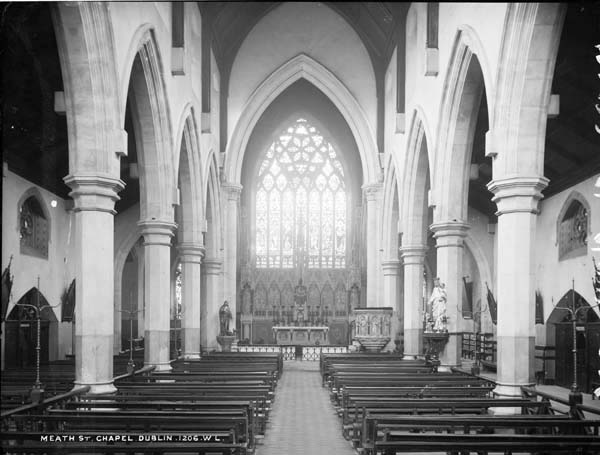 Interior of St. Catherine’s in Meath Street, photographed by Robert French between 1865 and 1914. Available through the National Library of Ireland’s Lawrence Photograph Collection.

The reference to the church in “The Sisters” carries implications of religious tension as well. A Catholic church designed by James Joseph McCarthy (though some would dispute this credit), who also designed the Star of the Sea Church around the same time, St. Catherine’s in Meath Street sits just around the corner from St. Catherine’s in Thomas Street, a Church of Ireland establishment where the Nationalist leader Robert Emmet was executed in 1803. Though Emmet was a Protestant, he supported Catholics’ freedom to worship. Thus even though the reference to St. Catherine’s is complicated by the two opposing denominations in near proximity to each other, even the tension is further complicated by the indirect evoking of Emmet whose political ideas were as important, if not more important, than his religious preferences. 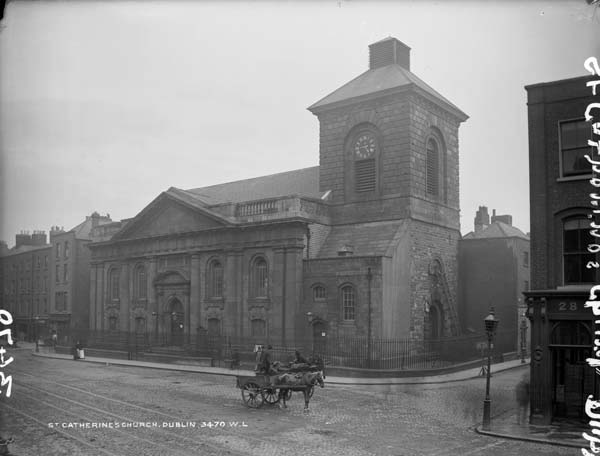 St. Catherine’s Church of Ireland in Thomas Street, photographed by Robert French between 1865 and 1914. Available through the National Library of Ireland’s Lawrence Photograph Collection.

In a story so seemingly centered on religious matters (simony [9], catechism [9, 13], the mysteries of the sacraments [13], Father Flynn, a mysterious fall from grace [16-18], etc.), the complex implications embedded in the reference to St. Catherine’s, just steps away from the other St. Catherine’s, coupled with the bookended references to Great Britain Street and Irishtown, the story’s first and last geographical references, respectively, suggest that, as usual with Joyce, there is much more at work in “The Sisters” than just religious mysteries and dichotomies. Religion is only part of a larger network of issues that, appropriately, the opening story of Dubliners invokes. And as Stephen reminds us later, in Ulysses, he is “servant of two masters…an English and an Italian” (U 17.638), meaning “[t]he imperial British state…and the holy Roman catholic and apostolic church” ((U 17.643-44). Religion is almost always tangled up with politics in Ireland, and seeing St. Catherine’s in Meath Street on a map, so close to Emmet’s execution site at St. Catherine’s in Thomas Street, helps to highlight the political overtones in the story, which, as it turns out, are just as prominent as the more literal religious ones.

Tagged with: the sisters