The Irish College in Rome

Father James Flynn, the priest who dies in “The Sisters” had been an important person in the narrator’s life. The priest had taught the young boy “a great deal,” including proper pronunciation of Latin, all about Napoleon, and the intricacies of the liturgical year and the mass. The narrator’s description of his informal education by the priest seems to also have been a Socratic one, for according to the boy,

“He had amused himself by putting difficult questions to me, asking what one should do in certain circumstance or whether such and such sins were mortal or venial or only imperfections. His questions showed me how complex and mysterious were certain institutions of the Church which I had always regarded as the simplest acts” (13).

Flynn himself had also been educated in all these areas, though his education was, of course, a formal one. In fact, 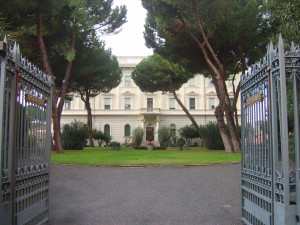 The Irish College in Rome. Image from the college’s website, http://www.irishcollege.org/

According to the history page on its website, The Irish College in Rome reopened in 1826 after having been closed for 28 years due to the French Invasion and the Napoleonic Wars.

When it finally reopened, it did so in a new location, since the old one had been lost “to some Sisters.” The reopening was led by Father Michael Blake of Dublin. Then, according to the history,

Within six years the two of the most famous Rectors of the College entered the pages of it’s [sic] history. Paul Cullen served as Rector for seventeen years, before going to Armagh as Archbishop and subsequently to Dublin as Archbishop and eventually as Ireland’s first Cardinal. He was succeeded by Tobias Kirby, a priest of the Diocese of Waterford and Lismore, who served as Rector for forty-one years from 1850 until he retired in 1891. The College archive contains his entire collection of letters, one of the most important private collections for the history of the nineteenth century in the English speaking world.”

(That archive is available online through the college’s website.)

Since he’s noted to have been 65 when he dies on July 1, 1895, Father Flynn would have been born in 1829 or 1830 and so would have attended the college well after its reopening, at the earliest, about 1850. This is the year Tobias Kirby became rector. Kirby died January 20, 1895, just under 6 months before Father Flynn. Like Joyce, Kirby returned to Dublin only twice after he left for the continent. According to the biographical summary accompanying the collection of Kirby’s letters housed at the college, “He maintained contacts with his ex-students some of whom were to become bishops in Australia.” Might one of these correspondents be the priest mentioned in Eveline, a school friend of her father’s who had moved to Melbourne?

All but one (Persia) of the geographical references in “The Sisters,” including the Irish College in Rome, pertain to Father Flynn. And only one of these is shared with the narrator: Great Britain Street. The street is where the Drapery is, where Flynn is lying in “the house of mourning” (14) and where the boy goes to visit. Five of the six total geographical references relate to the priest’s birth (Irishtown), education (Irish College in Rome), vocation (St. Catherine’s in Meath Street), unrealized plans (Johnny Rush’s), or death (Great Britain Street). The way this dead figure dominates the geography seems to anticipate the collection’s final story, wherein the dead continually exert their influence on the living.

One Response to The Irish College in Rome