Ormond Quay is one of many waterfront spans of street lining the Liffey in central Dublin. Situated on the north bank, its upper (western) and lower (eastern) sections are bisected by Capel Street as it becomes Grattan Bridge. In association with Joyce’s works, it’s perhaps most recognized as the location of the Ormond Hotel, the setting for Ulysses’s Sirens episode where Bloom listens to and ruminates on music after tortuously yet curiously observing Blazes Boylan just before he is to meet Molly. 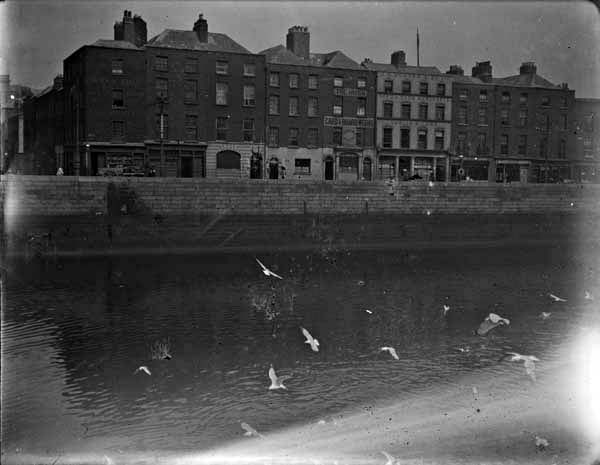 “[View of the River Liffey and Ormond Quay, Lower, taken from south quays].” Photograph by J.J. Clarke. From the Clarke Photographic Collection at the National Library of Ireland.

But Ormond Quay is also where Mr. Kearney, of “A Mother,” is a bootmaker:

“However, when she drew near the limit and her friends began to loosen their tongues about her, she silenced them by marrying Mr. Kearney, who was a bootmaker on Ormond Quay” (137).

Don Gifford emphasizes that “[a] bootmaker should not be confused with a cobbler; bootmaking is an honored middle-class profession in England and Ireland” (Gifford 97). Miss Devlin marries Mr. Kearney both to silence her friends and to ensure her future security, “perceiv[ing] that such a man would wear better than a romantic person” (D 137).

Aside from sharing a geographical reference, “A Mother” and Ulysses also share a character: Mr. O”Madden Burke. In “A Mother,” O’Madden Burke is decribed as “a suave, elderly man who balanced his imposing body, when at rest, upon a large silk umbrella. His magniloquent western name was the moral umbrella upon which he balanced the fine problem of his finances. He was widely respected” (145). We learn that Burke is to write the report of the concert and that Mr. Hendrick from the Freeman will “see it in.” Burke also appears in Ulysses, in the Aeolus episode set in the Freeman office, “tall in copious grey of Donegal tweed” as he “c[omes] in from the hallway.” During the spirited conversation among the group (which includes Lenehan who appears both in the novel and “Two Gallants”), the umbrella appears again:

—The Rose of Castile. See the wheeze? Rows of cast steel. Gee!

The reference to The Rose of Castile foreshadows the Sirens episode, set in Ormond Quay, where it figures prominently as one of the musical allusions. And just as O’Madden Burke appears first in “A Mother,” so too perhaps does Mr. Kearney the bootmaker of Ormond Quay make a brief appearance, at least as a playful phrase, in Ulysses:

“(A hackneycar, number three hundred and twentyfour, with a gallantbuttocked mare, driven by James Barton, Harmony Avenue, Donnybrook, trots past. Blazes Boylan and Lenehan sprawl swaying on the sideseats. The Ormond boots crouches behind on the axle. Sadly over the crossblind Lydia Douce and Mina Kennedy gaze.)” (U 15.3726-31).

But what does the reference to Ormond Quay contribute to our reading of “A Mother?” The reference, like so many of Joyce’s geographical references, may recall a time before the story’s setting.  Incidentally, in 1850, there were two bootmakers listed in Thom’s Directory in Ormond Quay: William Muldary at 16 Lower Ormond Quay, and James Henry Baird at 11 Upper Ormond Quay. Furthermore, in “Robert Emmet’s Rising of 1803 and the Bold Mrs. Kearney: James Joyce’s ‘A Mother’ as Historical Analogue,” Martin F. Kearney explores the connections between the concert in “A Mother” and Robert Emmet’s 1803 uprising, pointing out that Anne Devlin is evoked in Mrs. Kearney’s maiden name Devlin, setting the stage for a much more politically charged story than what many of the early critics recognized. The author Kearney traces several interesting and convincing parallels between Anne Devlin and Mrs. Kearney, but he also suggests that Mr. Kearney’s character also carries correlative implications to the 1803 uprising. He notes, for example, that there were two Kearneys involved in the events: William Kearney, who “concealed Emmet and several rebel officers in the garret of his inn” (para. 18); and Edward Kearney, who “was the first to be executed, having been adjudged guilty of participation in the bid for Ireland’s freedom. The religious fervor of Joyce’s Mr. Kearney gains poignancy with the realization that Edward Kearney was forced to face the scaffold without benefit of a priest to hear his last confession or to offer spiritual comfort” (para. 18). Most interestingly, though, William Cole, a shoemaker, followed in the footsteps of William Kearney and hid Philip Long, a major member of the uprising, in his house in Ormond Quay. That Joyce stepped Mr. Kearney up from a shoemaker to a bootmaker may be a nod to Emmett’s well-known Hessian boots, which, as article’s author points out, he wore both on the night of the rebellion and during his execution at St. Catherine’s.

There are many ways in which “A Mother” reflects the political and personal complexities of the Irish Revival, and the geographical references only add more refractions to the prism of meaning and commentary Joyce built into the story.