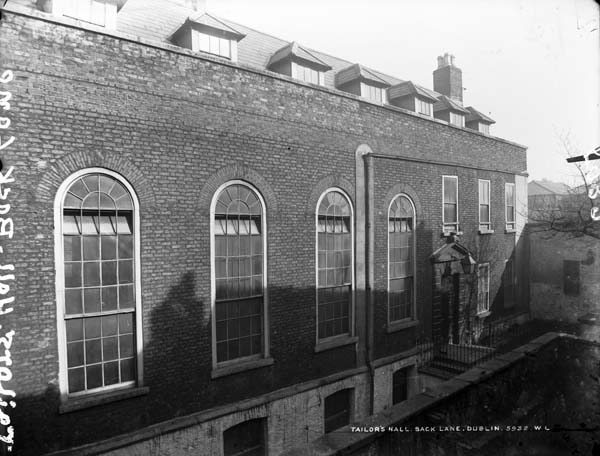 Back Lane, where Gabriel Conroy teasingly situates his family’s ancestral mansion, is, despite its unassuming name, quite rich with history and allusion. Located just south of the Liffey, it’s a small, narrow lane, which according to the Database of Irish Excavation Reports, was “an important medieval street known as La Rochelle Street, presumably one of the premier residential streets of the city.” Parts of the medieval city wall still lie buried under the street’s structures, and the lane has seen several excavations in the past two decades. According to the report compiled from one of these excavations,

The site has the potential to contain some of the richest and best-preserved Viking and Anglo-Norman archaeological deposits within the medieval city on the basis of the survival of a Hiberno-Norse earthen bank which pre-dates the wall and the medieval deposits which present at a relatively high level on the Back Lane frontage. In addition the site also contains the remains of a 17th-century Jesuit chapel and novitiate.

Although Joyce was likely unaware of much of this recently uncovered history, he was certainly familiar with the Back Lane Parliament, a group meeting in December 1792 that drafted a petition to the king for relief from the harsh penal laws and restrictions on Catholics during the period. The meeting was called the Back Lane Parliament because they met at the Tailors’  Hall located in Back Lane. (For more on the fascinating history of the Tailors’ Guild and its Hall in Back Lane, see F.E. Dixon’s “The Dublin Tailors and Their Hall” in Dublin Historical Record , Vol. 22, No. 1 (Jan., 1968), pp. 147-159.)

In “The Dead,” Gabriel begins the story of Johnny, his grandfather’s horse, with a nod to Back Lane:

–So the old gentleman, as I said, harnessed Johnny and put on his very best tall hat and his very best stock collar and drove out in grand style from his ancestral mansion somewhere near Back Lane, I think.

Everyone laughed, even Mrs. Malins, at Gabriel’s manner and Aunt Kate said:

Gabriel continues his story, delighting his audience with the tale of Johnny, who “whether he fell in love with the horse King Billy sits on or whether he thought he was back again in the mill, anyhow…began to walk round the statue” (208). King Billy, of course, is known for ensuring the succession of Protestants to the British throne with his victory over James II during the Battle of the Boyne. The statue was erected in 1701 by Protestant Irish supporters of William III.

What may appear at first to be a simple geographic indicator is more likely Joyce establishing the political opposite of the King Billy symbol. The Back Lane and William of Orange references reintroduce the story’s continuing tensions between Catholic and Protestant, Irish and English.