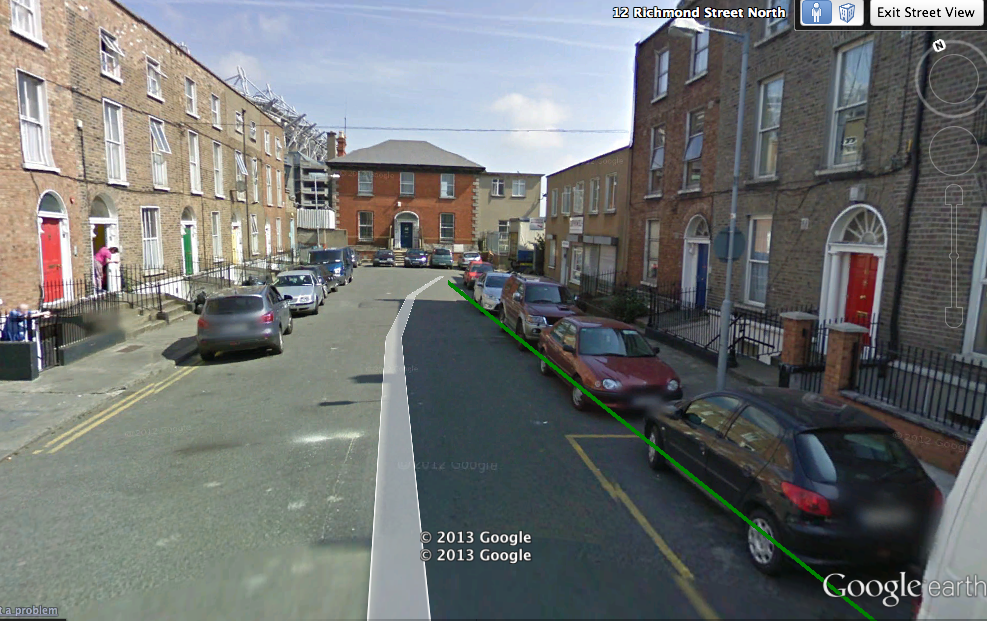 From the Google Earth version of the map, street view of North Richmond Street, facing the bind end.

It might be one of the most recognizable first lines in English literature, and it happens to contain not just one but two specific geographical references to very real locations: “North Richmond Street, being blind, was a quiet street except at the hour when the Christian Brothers’ School set the boys free” (29). The sentence is from “Araby,” certainly Joyce’s most anthologized story, and it is the setting for much of the story’s action. (The story’s title location is the locale for only the final few paragraphs.) The narrator’s home street is described as “blind” or having a dead end. At the blind end stands an empty house while “[t]he other houses of the street, conscious of decent lives within them, gazed at one another with brown imperturbable faces.” The almost haunting personification of the blind street and the gazing houses echoes the general hybridization of place and person that characterizes Dubliners and emphasizes the importance of place and geography in the collection as a whole.

Joyce himself lived at 17 North Richmond Street for a time when he was a child, and number 12 North Richmond Street is identified in Ulysses as a place where Stephen Dedalus’s mother had once kindled a fire for him (U 10.76). In “Araby,” it’s where the boy lives with his aunt and uncle, where he plays with his friends in the shadows, and where he falls in love with Mangan’s sister in the evening lamplight. The railings are mentioned several times and can be seen in the image above: “…I was alone at the railings. She held one of the spikes, bowing her head towards me. The light from the lamp opposite our door caught the white curve of her neck, lit up her hair that rested there and, falling, lit up the hand upon the railing” (32). Later the boy recalls this image: “I may have stood there for an hour, seeing nothing but the brown-clad figure cast by my imagination, touched discreetly by the lamplight at the curved neck, at the hand upon the railings and at the border below the dress.” The description almost anticipates Gabriel’s image, a couple miles southwest at Usher’s Island, of his wife on the stairs listening to distant music.

One Response to North Richmond Street