Editor’s Note: The following is the first guest contribution to the Mapping Dubliners Project. The author, Sarah Hoyt, is a senior at Erskine College and a student in Dr. Amanda Sigler’s James Joyce course. She graduates May 21. 2016 with a B.A. in English.

Historically, that stretch of land which would eventually become St Stephen’s Green began its life as a marshy plot. The website for Ireland’s Office of Public Works notes that the “name St Stephen’s Green originates from a church called St Stephen’s in that area in the thirteenth century” and that the area originally was used by the citizens of the city of Dublin to graze their livestock. However, in 1663 the plot of ground was decided by the City Assembly to be perfect for generating a consistent revenue for Dublin; twenty-seven acres were marked for the park and the remaining land was let after its division into ninety building lots. In The Joycean Way, Bidwell and Heffer explain that the “central portion was planted and lots… were distributed among some of the city’s more prosperous citizens. [The citizens] were not required to build, and for some time much of the south and east side was retained in agriculture and grazing” as it had been prior to its creation (140).

Nevertheless, according to Fargnoli and Gillespie in James Joyce A to Z, by 1670 the park was “enclosed for citizens to ‘take the open aire’” (196). Taking “the open aire” was presumably quite fashionable, and soon the wealthy of the city had fully taken over by moving in and claiming the location as distinctly their own. By the eighteenth century the park had been encircled by a host of Georgian mansions, and the “Beaux Walk situated along the northern perimeter of the park became a popular location for high society to promenade” (OPW). 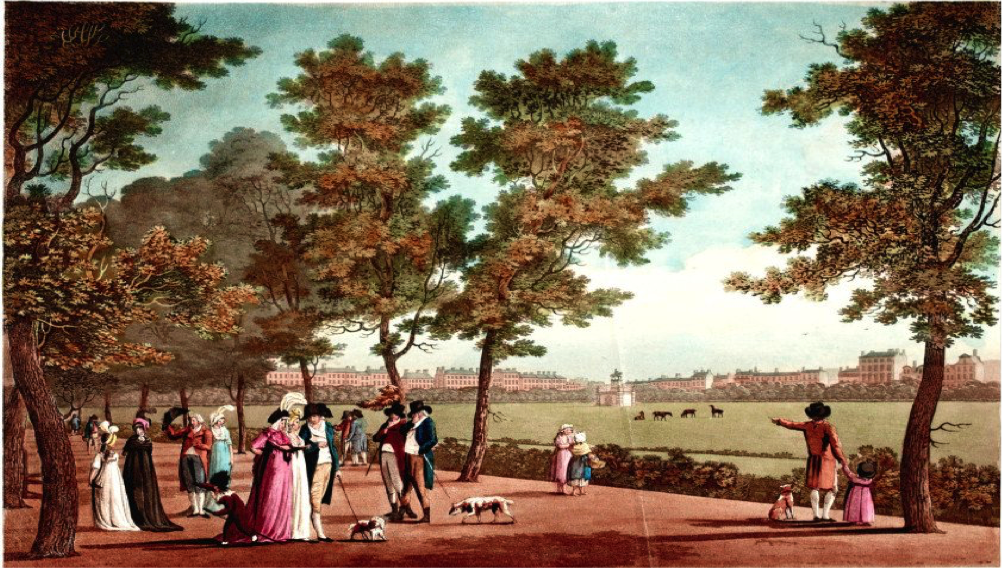 Despite the initial clamor for residing in St Stephen’s Green by those who were rich and high-born, the park was neglected over much of the nineteenth century (Bidwell and Heffer 140). Though one effort in 1814 to beautify the park was raised, in which a “broken wall [was replaced] with ornate Victorian railings and… more trees and shrubs [were planted],” as well as “[n]ew walks… constructed to replace the formal paths previously found in the park” (OPW), overall the construction was considered a failure by the majority of Dubliners. With these improvements, the Green became a private park—in spite of the 1635 law decreeing the park “available for use by all citizens.” The 1814 move from an open to a private park “was widely resented by the public” (OPW).

Not until 1877 was St Stephen’s Green once more opened to the public. At the behest of Sir Arthur Guinness, later Lord Ardilaun, the Green was bought from its private owners and returned to the public. “[Sir Arthur Guinness] paid off the park’s debts and secured an Act which ensured that the park would be managed by the Commissioners of Public Works, now the OPW” (OPW). This done, Lord Ardilaun extensively relandscaped the park, adding not only trees and huge flowerbeds but a three-acre lake with a waterfall and a bridge, and enclosed the park in wrought-iron railings (OPW; Fargnoli and Gillespie 196). The new renovation, “[a]fter three long years of construction work” and expenditures of “£20,000” (OPW), was opened to the public on July 27, 1880. The public loved it immediately; it “quickly reemerged as a popular gathering place for Dubliners of all classes” (Fargnoli and Gillespie 196)—from the very rich to the very poor. 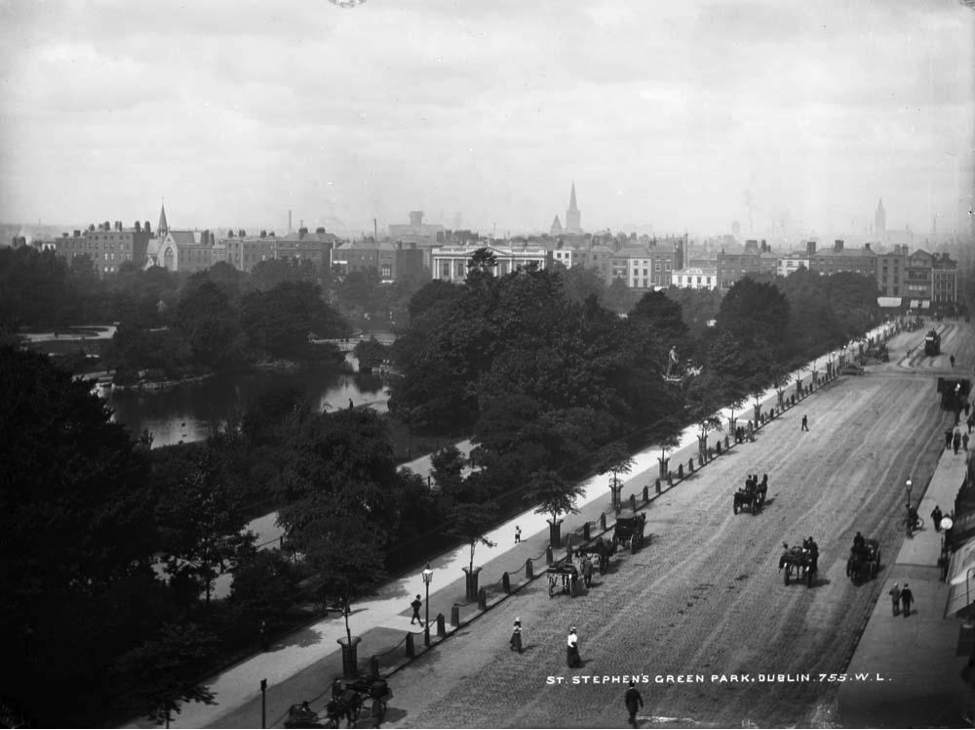 It is important, nonetheless, to bear in mind that St Stephen’s Green in Joyce’s time was considered to be “[a] sizable public park in a fashionable section of east-central Dublin,” as Gifford points out in Joyce Annotated (54). Knowing both the contemporary and the historical context of the park can help readers to better grasp what Joyce may have meant by inserting St Stephen’s Green into “After the Race” and “Two Gallants.”

In “After the Race,” the main character in the story, Jimmy Doyle, and his wealthy foreign friends—jubilant because of their success in the race—make their way across the park:

“The young men strolled along Stephen’s Green in a faint cloud of aromatic smoke. They talked loudly and gaily and their cloaks dangled from their shoulders. The people made way for them” (Joyce 46).

Bidwell and Heffer argue that, in “After the Race,” Joyce may be using St Stephen’s green as a metaphor to evoke the “‘corruption’ which Stephen senses pervading Dublin” (50). As Stephen’s Green is “associated with the rich and sophisticated in Dublin” (Bidwell and Heffer 125), Joyce may been seen as referring to St Stephen’s Green because he is attempting to strip the walk that the characters are taking of its illusory extravagance and instead display the underlying and repulsive corruption that lies behind the wealth of the main characters. 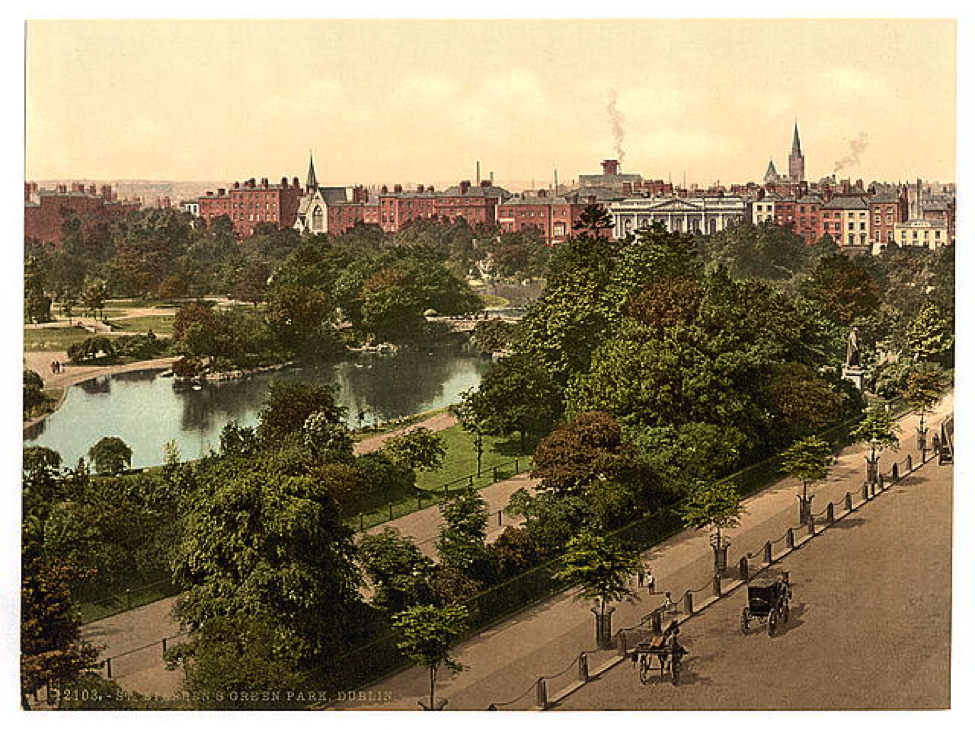 In “Two Gallants,” the mood surrounding St Stephen’s Green is sombre, as Lenehan and Corley—and then only Lenehan, alone—walk from the road into the park:

“The two young men [Lenehan and Corley] walked up the street without speaking, the mournful music following them. When they reached Stephen’s Green they crossed the road [to enter the Green itself]. Here the noise of trams, the lights and the crowd released them from their silence” (Joyce 54).

Although the tone surrounding St Stephen’s Green seemingly differs in the two works, the meaning in both cases points toward corruption. Here, the corruption is not so much of wealth as of “treachery” (Bidwell and Heffer 50). The fact that “several scoundrelly characters are associated with the area” bolsters this notion of treachery (50). Captain O’Shea, who “betrayed the relationship between [Charles Stewart] Parnell and Kitty O’Shea, attended the university at 86 Stephen’s Green” (50). This address was also home to Buck Whaley, acceptor of a £4,000 bribe to vote against his own political party and a “boon-companion to Francis Higgins,” who nefariously contributed to suppressing the Rising of 1798; Higgins himself “lived at 82 St Stephen’s Green” (50).

This list of scoundrelly characters from Irish history is only furthered by the actions of Lenehan and Corley near St Stephen’s Green—like the characters who lived there before them, Lenehan and Corley are scoundrels steeped in the same “decadent commingling of greed, peremptory self-righteousness, and sexual intrigue” that their historical predecessors exhibited (according to Donald Torchiana, quoted in Bidwell and Heffer 84). Lenehan and Corley’s insertion into St Stephen’s Green draws attention to the “historical associations” of “the debauchery, perfidity and false nobility” of Dublin (Bidwell and Heffer 84). St Stephen’s Green, for Joyce, is then merely another metaphor for the layers of corruption, greed, falsity, and treachery that paralyse all the characters in his Dubliners.

Bidwell, Bruce and Linda Heffer. The Joycean Way: A Topographic Guide to Dubliners & A Portrait of the Artist as a Young Man with Maps and Photographs. Baltimore: Johns Hopkins University Press, 1982. Print.

Fargnoli, A. Nicolas, and Michael P. Gillespie. James Joyce A to Z: The Essential Reference to His Life and Writings. New York: Oxford University Press, 1995. Print.

Tagged with: after the race • two gallants