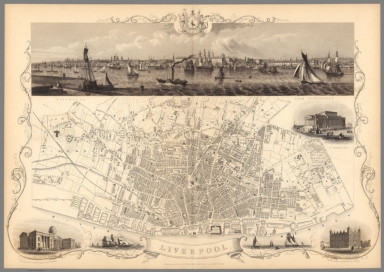 An 1851 map of Liverpool by R.M. Martin and J. & F. Tallis. From the online David Rumsey Map Collection. (Browsable copy embedded below.)

Liverpool is referenced explicitly in one story and implicitly in another. In “A Boarding House,” it is the origin of “tourists” who float through Mrs. Mooney’s establishment:

“Mrs Mooney, who had taken what remained of her money out of the butcher business and set up a boarding house in Hardwicke Street, was a big imposing woman. Her house had a floating population made up of tourists from Liverpool and the Isle of Man and, occasionally, artistes from the music-halls. Its resident population was made up of clerks from the city. She governed her house cunningly and firmly, knew when to give credit, when to be stern and when to let things pass. All the resident young men spoke of her as The Madam.”

Along with the Isle of Man, a British crown dependency, Liverpool represents in a general sense the infiltration of Britain into Ireland and its economy, especially in the context of Mrs. Mooney’s business which relies as much on the Manx and English tourists as it does the Dublin clerks for its livelihood. Don Gifford notes these tourists represent an “extraordinarily rowdy citizenry” (Gifford 63) because of their origins, necessitating the stern and cunning qualities Mrs. Mooney projects.

But what is it exactly about Liverpool that would make these “tourists” so rowdy? The answer could lie in the implicit reference to Liverpool that hovers between the lines of “Eveline.” Frank is identified as a sailor who started as a deck boy on the Allan Line. As discussed in greater detail in the Canada essay, the Allan Line maintained several regular routes between Liverpool and Canada. It would be logical to assume that many of Liverpool’s young male population would have been employed by shipping lines like the Allan Line or many others that ported out of Liverpool. Frank may not still work for the Allan Line, which sailed regularly between Buenos Ayres, Liverpool, and Canada, but he almost certainly worked at one time out of Liverpool, the largest nearby port for trans-Atlantic voyaging.

Liverpool had been a thriving port city since the eighteenth century when it prospered as one of the leading centers of the slave trade. Despite slavery’s illegal status in England, Great Britain still capitalized on the barbarism of human abduction, trafficking, torture, and genocide, and this industry made Liverpool one of the most prosperous port cities in the world. In the nineteenth century it received many of Ireland’s famine refugees and because of its central position to many different shipping lines including lines to North America, China, and Australia, it became a wealthy and widely diverse city. The port city retains its problematized heritage. On one hand, areas of the city have been declared UNESCO world heritage sites, and on the other, Jessica Moody rightly asks “How does the criticism that there has been a ‘maritimising’ of the memory of slavery nationally, play out ‘locally’ somewhere like Liverpool, a place frequently defined by its maritime conections as a ‘seaport’ or ‘port city’ within historical discourse?” (151)

By the time Dubliners takes place, this heritage had been well entrenched, but the American Civil War and Emancipation Proclamation had all but ended one of the port city’s main industries. Still, with emigration and merchant shipping, Liverpool persisted as a British commercial hub and a lucrative base for sailors to find work. In fact, it is more likely that the “tourists” from Liverpool in “The Boarding House” are not native Liverpudlians at all but sailors whose travels place them in Liverpool in between voyages. It’s also possible these tourist-sailors aren’t able to find work, either because of the glut of able young men available for the job or because of some more nefarious reasons. 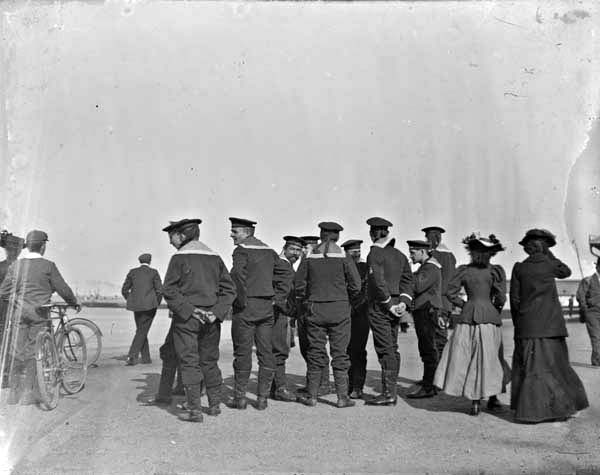 “[Sailors standing near the seafront in Kingstown],” photographed by J.J. Clarke between 1897 and 1904. From the National Library of Ireland’s digitized Clarke Photographic Collection.

The reputation of sailors at the turn of the twentieth century was complex. The song Frank sings to Eveline, “The Lass That Loves a Sailor” exemplifies some of the more romantic notions of sailorhood. It was written by Charles Dibdin who was commissioned to write maritime-themed songs to boost morale during the Anglo-French wars of the early nineteenth century. That Frank sings this song about sailing soldiers longing for love indicates he perceives himself as part of a romantic Ulyssean legacy of seafaring. But as Judith Fingard explains, by the end of the nineteenth century, such a sailor “belonged to a dying occupation.” Frank is not Odysseus. He is not even a soldier. He is a graduated deck boy sailing between Liverpool (by way of Dublin in his downtime) to North and South America. The hundred years between the song and his reality had greatly complicated the image of the sailor. Fingard traces some of the perceptions in Jack in Port: Sailortowns of Eastern Canada, where she describes the typical mid-nineteenth-century sailor as connoting a stereotype: “His legendary indiscipline, non-productive labour, and frequent foreignness mark him out, along with naval seamen, soldiers, and prostitutes, as a misfit who was there to be seen, but who need not be heard” (3). She adds that sailors were often associated with boarding houses, though they were encouraged by their employers to “act temperately and avoid boarding houses” (5). By the end of the century, she writes, sailors were often met with “disdain” by landsmen “for a proverbially bothersome presence in the streets, taverns, and institutions of health, order, and justice” (6). Such descriptions suggest it would even be likely that Frank, a seasoned if retired sailor by the time he returns to “the old country just for a holiday,” could have stayed at Mrs. Mooney’s when he was in town. After spending downtime in Liverpool and the surrounding areas so long, why wouldn’t these sailors, or “tourists,” like Frank, spend a little time in Dublin? Perhaps they could meet the kind of “lass that loves a sailor” so many seamen were looking for.
Tagged with: eveline • the boarding house