Section of Letts, Son & Co. 1883 Map titled Plan of the City of Dublin. The yellow vertical line shows the road called both “Road to Glasnevin” and “Phibsborough Road.”

Perfectly fitting to the ambiguity of place and movement in the story, the reference to “the Glasnevin road” at the opening of “Grace” is as curiously nonspecific as it is ripe with possibilities: “The car halted before a small house on the Glasnevin road and Mr Kernan was helped into the house” (154).

Not itself the name of any particular Dublin street, notes Don Gifford, Glasnevin road is more a label for a typical series of roads that could lead through north Dublin to the neighborhood of Glasnevin, located roughly 3 kilometers north of the city center (Gifford 102). Though the reference is indeed vague, an 1883 Lett’s and Sons map shows a stretch of road at the corner of the page labelled “Road to Glasnevin.” Further south the street becomes Phibsborough Road. Whether the reference is to this specific street named vaguely or to a vague pathway not quite named, the ambiguity Joyce imbued into the location is thematically appropriate.

The place appears as the location of Tom Kernan’s house, and thus where the cab takes him after his drunken stumble down the stairs in an unnamed bar also somewhat vaguely located in or near Grafton Street. The non-specific home location is appropriate as a landing place for the temporarily inarticulate Kernan at the opening of the story. Having bitten his tongue in the drunken fall, he must rely on his friend, the aptly named Mr. Power, to convey his address to the cab driver. And though we know Power does this (“while Mr Power was giving directions to the carman”), we do not get to hear a particular address or even the general “directions” Power is communicating (153). When Power joins Kernan in the cab and asks him what exactly happened, Kernan can only respond with “I ‘an’t, ‘an,…‘y ‘ongue is hurt” (153). His inability to tell his own story is reflected in the vagueness of space that permeates “Grace.”

Glasnevin road also appears later in the story, in a misleadingly more specific context as the location of Mr. Fogarty’s store:

“Mr Fogarty was a modest grocer. He had failed in business in a licensed house in the city because his financial condition had constrained him to tie himself to second-class distillers and brewers. He had opened a small shop on Glasnevin Road where, he flattered himself, his manners would ingratiate him with the housewives of the district. He bore himself with a certain grace, complimented little children and spoke with a neat enunciation. He was not without culture” ().

The second reference to Gasnevin road is just as entwined as the first with the thematic context of the passage in which it appears. More than just an indication of place, the seemingly specific label gives Fogarty’s shop more permanence than it may actually warrant. We learn that Fogarty’s business practices are perhaps a bit lax as evidenced by his past failure and also his gift of whisky to Kernan despite the “small account for groceries unsettled between [Kernan] and Mr Fogarty” (166). It seems Fogarty is as irresponsibly generous as he is perhaps dangerously enabling of Kernan’s alleged drinking problem. Furthermore, that both men are located on the Glasnevin Road, however non-specific that road may be, indicates a destination toward something much more somber than failed business and a bitten tongue.

Glasnevin’s most iconic feature is perhaps its cemetery, the resting place of prominent political figures such as Daniel O’Connell, Charles Stewart Parnell, and many others interred there after the publication of Dubliners. It is also the resting place of Paddy Dignam and the setting for his funeral in Ulysses. Not surprisingly, among the attendees of the procession is none other than Mr. Tom Kernan. 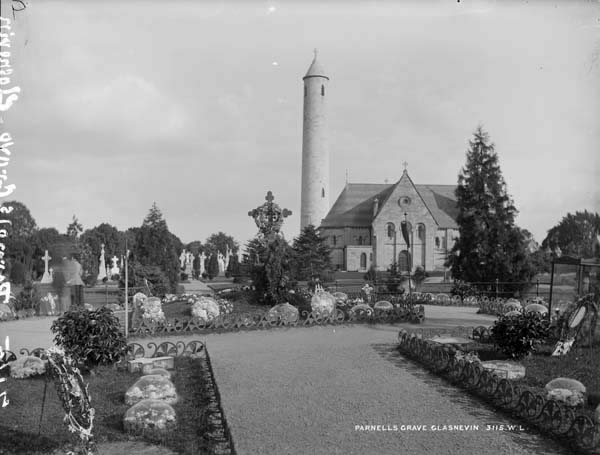 Parnell’s Grave at Glasnevin Cemetry. The tower in the background is the O’Connell Monument. Photo by Robert French, between 1891 and 1900. From the National Library of Ireland’s digitized Lawrence Photograph Collection.

The cemetery was opened in 1832 as an expansion to the nearby Golden Bridge Cemetery, which O’Connell himself had a significant hand in establishing as an alternative to more expensive graveyards that were financially inaccessible to many of the Nationalist figures of the nineteenth century. As Richard J. O’Duffy notes in his 1915 Historic Graves in Glasnevin Cemetery, “All the great movements, in one shape or another, that arose immediately before or after the year 1800, having as their goal the liberation or the good of Ireland–the Emancipation Movement, the Movement for Repeal, the ’48 Era, the Insurrection of ’67, the Home Rule Movement, and that identified with the name of Parnell–all are here represented in this great necropolis of Ireland, either in leaders or their adherents” (2-3).

It is rumored, but not definitively accepted, that Robert Emmet’s remains are at either Glasnevin or St. Michan’s. Incidentally, it is Tom Kernan, not Bloom, who ponders this rumour in Ulysses: “Let me see. Is he buried in saint Michan’s? Or no, there was a midnight burial in Glasnevin. Corpse brought in through a secret door in the wall. Dignam is there now. Went out in a puff. Well, well. Better turn down here. Make a detour” (U 10.769-72). Kernan is one of many attendees at Paddy Dignam’s funeral, which takes place at the cemetery in Glasnevin, and Bloom thinks momentarily about Mr. Fogarty just as the carriage passes a pub at the corner of Finglas Road and Prospect Terrace. 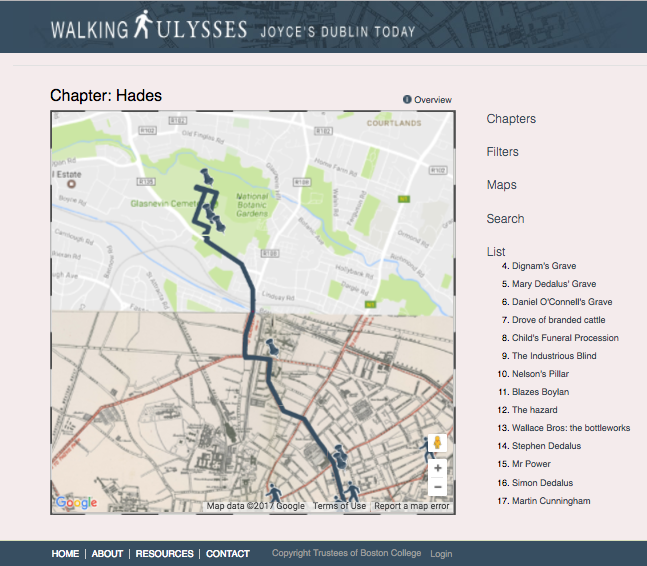 Screenshot of the “Hades” map on the Walking Ulysses project out of Boston College. Located at http://ulysses.bc.edu

The route to Glasnevin is clear and specific in Ulysses (e.g. Blessington Street, Berkeley Street, Phibsborough Road, Crossguns bridge, Finglas road). As the Walking Ulysses project proves, it is in fact clearly mappable (see above). But in “Grace,” Joyce’s purposefully ambiguous “Glasnevin road” is reflective of the ambiguity associated with the concept of grace itself. The word appears four times in the story. Its first two uses are associated with fashion; the third is in reference to Mr. Fogarty whose first business endeavor failed, whose shop is vaguely located in Glasnevin Road, and whose manners and charms “ingratiate him with housewives” and children; and the final “grace” appears in Father Purdon’s business-themed instructions to the church on how to balance their temptation checkbooks: Well, I have looked into my accounts. I find this wrong and this wrong. But, with God’s grace, I will rectify this and this. I will set right my accounts.” Again the vague “this and this,” like the broad generality of the Glasnevin Road, are deictic markers. They require a contextual anchor. Defining grace, like identifying an explicit sin or an explicit street, requires some interpretation. 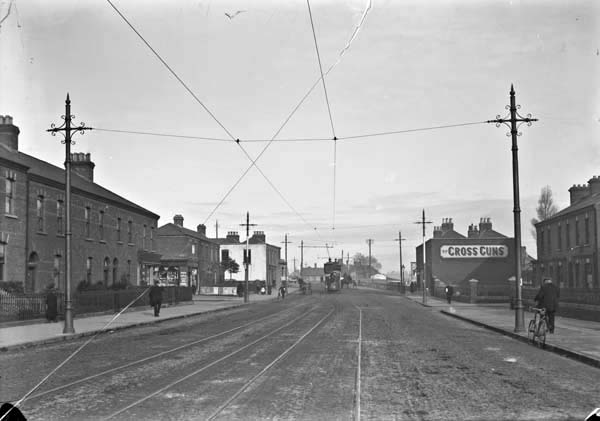 Photograph of Phibsborough Road at Crossguns Bridge, published between 1900 and 1939, from the Eason Collection at the National Library of Ireland. Using the route described more explicitly in Ulysses and the 1883 map of Dublin, this is a possible vicinity of Kernan’s residence in “the Glasnevin road.”