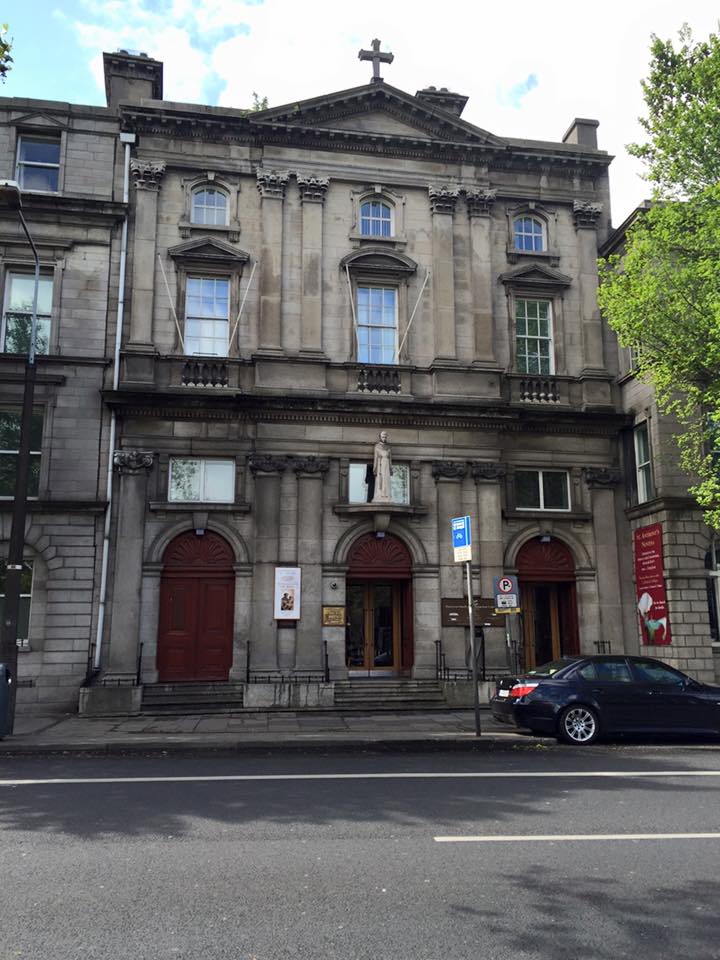 Adam and Eve’s (Church of the Immaculate Conception) as seen from the south bank of the Liffey in Merchant’s Quay. Photograph by Jasmine Mulliken, May 31, 2015.

Adam and Eve’s, the Fransiscan church mentioned in “The Dead,” was, from 1889 on, officially the Church of the Immaculate Conception. The nickname, which predates the official name, comes from the nearby Adam and Eve tavern, where mass was held secretly during the time of the penal laws. The church, which has been rebuilt, remodeled, and rearranged several times since the initial friary was built on the site in 1615,  sits on the south bank of the Liffey between Merchant’s Quay and Cook Street and besides its dome, is rather inconspicuous from the Liffey-side entrance. It’s just downhill from the historic and very conspicuous Christ Church, which conformed to Henry VIII’s new religious code during the reformation. Christ Church saw the first performance of Handel’s Messiah in 1742 and remained part of the Church of Ireland after the penal laws were lifted. Though not as renowned, Adam and Eve’s also had a choir, and leading the sopranos was Julia Morkan, Gabriel Conroy’s aunt in “The Dead:” “Julia, though she was quite grey, was still the leading soprano in Adam and Eve’s” (176).

Adam and Eve’s is just down the quays from 15 Usher’s Island, where the aunts live and where the first half of “The Dead” is set. Just after Julia performs “Arrayed for the Bridal” for her guests at their annual party, her sister Kate brings up the subject of the pope’s 1903 Motu Proprio: Inter Sollicitudines, which forbade women singing in choirs:

Aunt Julia shrugged her shoulders and said with meek pride:

“Thirty years ago I hadn’t a bad voice as voices go.”

“I often told Julia,” said Aunt Kate emphatically, “that she was simply thrown away in that choir. But she never would be said by me.”

She turned as if to appeal to the good sense of the others against a refractory child while Aunt Julia gazed in front of her, a vague smile of reminiscence playing on her face.

“No,” continued Aunt Kate, “she wouldn’t be said or led by anyone, slaving there in that choir night and day, night and day. Six o’clock on Christmas morning! And all for what?”

“Well, isn’t it for the honour of God, Aunt Kate?” asked Mary Jane, twisting round on the piano-stool and smiling.

Aunt Kate turned fiercely on her niece and said:

“I know all about the honour of God, Mary Jane, but I think it’s not at all honourable for the pope to turn out the women out of the choirs that have slaved there all their lives and put little whipper-snappers of boys over their heads. I suppose it is for the good of the Church if the pope does it. But it’s not just, Mary Jane, and it’s not right.”

She had worked herself into a passion and would have continued in defence of her sister for it was a sore subject with her but Mary Jane, seeing that all the dancers had come back, intervened pacifically:

“Now, Aunt Kate, you’re giving scandal to Mr. Browne who is of the other persuasion.”

Aunt Kate turned to Mr. Browne, who was grinning at this allusion to his religion, and said hastily:

“O, I don’t question the pope’s being right. I’m only a stupid old woman and I wouldn’t presume to do such a thing. But there’s such a thing as common everyday politeness and gratitude. And if I were in Julia’s place I’d tell that Father Healey straight up to his face…” (194-95)

That Julia is “still the leading soprano in Adam and Eve’s” suggests that Father Healey has yet to enforce the papal rescript, but from Kate’s comment, it seems he’s ultimately headed that direction. The entire rescript, which was a papal decree independent of any input from bishops or cardinals, addressed what Pope Pius X saw as “the abuse affecting sacred chant and music.” He saw this “abuse” as an effect of the “fatal influence exercised on sacred art by profane and theatrical art” and feared and derided “that pleasure that music directly produces, and that is not always easily contained within the right limits.” Thus, to take the sin out of music, and to preserve the “sanctity and dignity of the temple,” he proposed a list of rules regarding the music of the church. One of these twenty-nine decrees banned women from singing in the choir:

13. On the same principle it follows that singers in church have a real liturgical office, and that therefore women, being incapable of exercising such office, cannot be admitted to form part of the choir. Whenever, then, it is desired to employ the acute voices of sopranos and contraltos, these parts must be taken by boys, according to the most ancient usage of the Church. 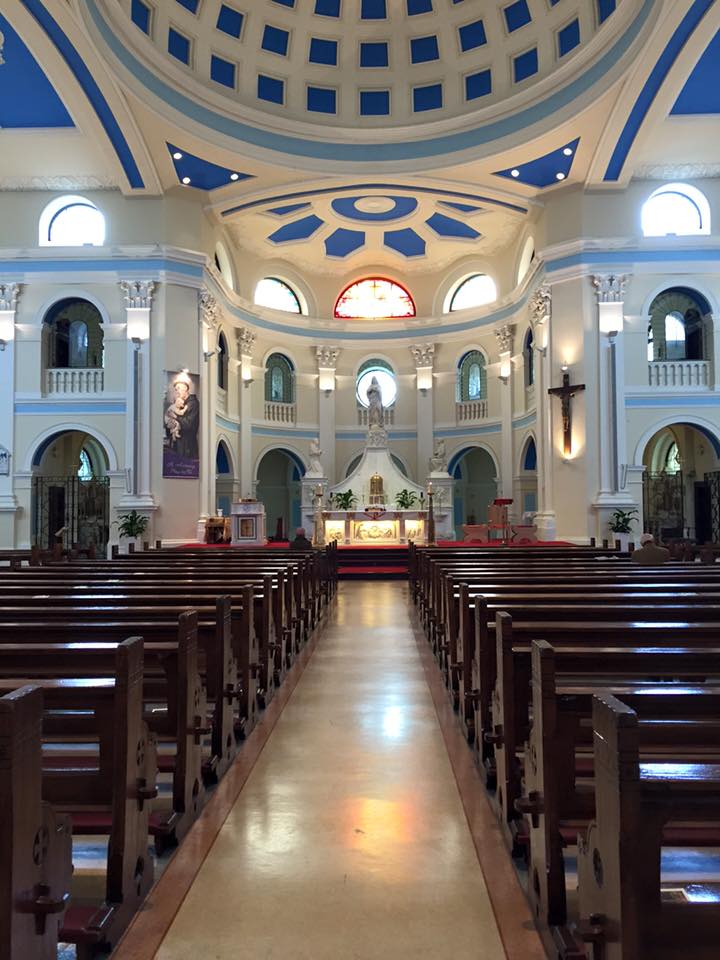 Interior of Adam and Eve’s, facing east toward the altar. The Merchant’s Quay entrance is to the left (north) and the Cook Street entrance to the right (south). Photograph by Jasmine Mulliken, May 31, 2015.

Like so many churches, Adam and Eve’s would have had excellent acoustics for a choir of any kind. Its dome was built in or shortly after 1900 at the same time the inside was rearranged and expanded. Today, the church even houses “the largest Catholic church organ in Dublin [which] has been described as one of the finest in the country.”

As a singer himself, any affinity Joyce may have begrudgingly retained for the Catholic Church would have undoubtedly included its music. Joyce celebrated and revered music, and his admiration for women singers is evident in the character of Molly Bloom, also a soprano, who “displayed at an early age remarkable proficiency as a singer having even made her bow to the public when her years numbered barely sweet sixteen” (U 16.1442-44). It’s easy to read Joyce’s own sentiments in Kate’s impassioned protests of the pope’s ban on women singing. Furthermore, Joyce would surely have noted the irony of this particular church, nicknamed after Eve and officially named after Mary, implementing such a restriction on the female voice. And perhaps it’s a counter to the papal res(c/t)ri(p/c)t that just as the church appears again in the story, Gabriel is right in the middle of imagining calling gently to his wife as she’s undressing. Actually, the church is not mentioned at all, but it’s clear from the line that interrupts his thoughts that they are just passing Adam and Eve’s on their walk from the Morkans’ house after the party:

“Like distant music these words that he had written years before were borne towards him from the past. He longed to be alone with her. When the others had gone away, when he and she were in the room in their hotel, then they would be alone together. He would call her softly:

Perhaps she would not hear at once: she would be undressing. Then something in his voice would strike her. She would turn and look at him….

At the corner of Winetavern Street they met a cab.” (214)

The couple would be walking by the front doors of Adam and Eve’s just before they reached the corner of Winetavern Street. The omission of the geographical reference (further emphasized by the ellipsis) and the replacement of it with Gabriel’s desire for Gretta subverts the power of the church and re-situates that power within the female body. Ultimately, Julia’s voice will resurface in Gabriel’s mind and Gretta’s voice will usurp the story altogether.

The foyer of the church also displays a plaque of important dates in its history, some of which include the publication of Joyce’s works. 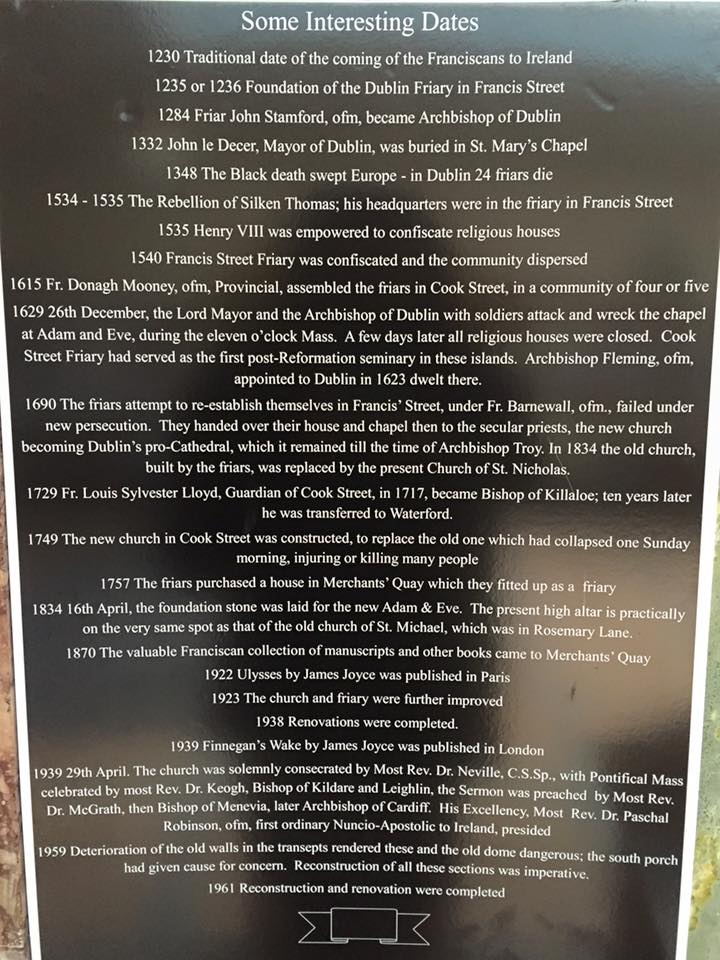 A list of “Some Interesting Dates” posted in the foyer of Adam and Eve’s. Photograph by Jasmine Mulliken, May 31, 2015.