The South Circular was, during the late 19th and early 20th centuries, essentially the southern border of Dublin. Most of the development along the road was residential and took place in the 19th century. As an outer-edge area, it would have been a somewhat less expensive, yet newer, more attractive, nearly suburban place to live for many families, and it appears to be the locale of several of Corley’s old flames in “Two Gallants:”

“–First I used to go with the girls, you know, said Corley, unbosoming; girls off the South Circular. I used to take them out, man, on the tram somewhere and pay the tram or take them to a band or a play at the theatre or buy them chocolate and sweets or something that way. I used to spend money on them right enough, he added, in a convincing tone, as if he were conscious of being disbelieved” (52).

Unlike the North Circular Road, which was somewhat upper-middle-class, the South Circular was slightly less posh and was even home to Richmond House of Corrections which became the military Wellington Barracks, pictured below, in 1887. 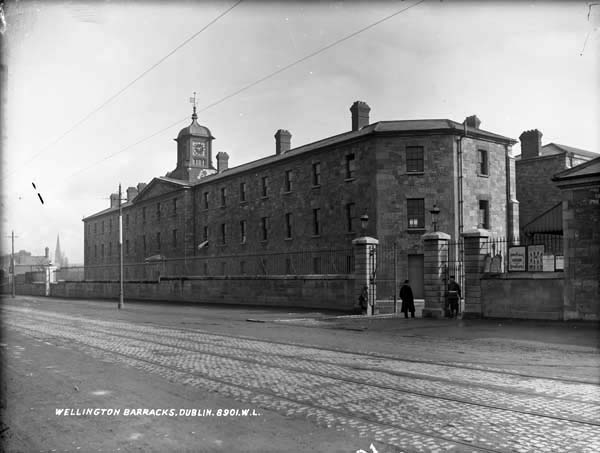 Wellington Barracks, photographed by Robert French between 1887 and 1914. Courtesy of the National Library of Ireland’s Lawrence Photograph Collection.

Don Gifford notes that the road “was a popular promenade for groups of unattached lower-middle-class young women” (58). The girls on the South Circular would most likely be young women, perhaps very like Eveline, living at home with their parents, perhaps inexperienced at romance and gullible to the “charms” of someone like Corley. Yet even after he spent money on pampering them, only one, who “was…a bit of all right” (53) gave him anything in return for his troubles. And she, according to Corley, later became a prostitute.

This photograph, from the Griffith College website, shows a “[v]iew of bomb damage on the South Circular Road, January 1941, taken from behind the Griffith Barracks’ railings. (Courtesy of the National Library of Ireland).”

Although taken in January 1941 after it was bombed, the photograph above shows a row of residences in South Circular Road, which are representative of the types of buildings that lined the street.

It’s also worth noting that in Ulysses, we learn that Bloom would wander along the South Circular Road, between Leonard’s Corner and Synge Street, with Owen Goldberg and Cecil Turnbull in 1884. The area around Portobello and the South Circular was home, in fact, to many Jews who had left Lithuania in the nineteenth century.

One Response to South Circular Road