Editor’s Note: The following is a guest contribution by Julie McCormick Weng, a Marion L. Brittain Postdoctoral Fellow at Georgia Institute of Technology. Her recent publications include articles in Journal of Modern Literature and Éire-Ireland. Her essay in Joyce Studies Annual, “From ‘Dear Dirty Dublin’ to ‘Hibernian Metropolis’: A Vision of the City from the Tramways of Ulysses,’” argues that Joyce’s depiction of Dublin’s tramways redresses stereotypes of Ireland as a (technologically) underdeveloped country. Julie also serves as editor of reviews for Breac: A Digital Journal of Irish Studies. 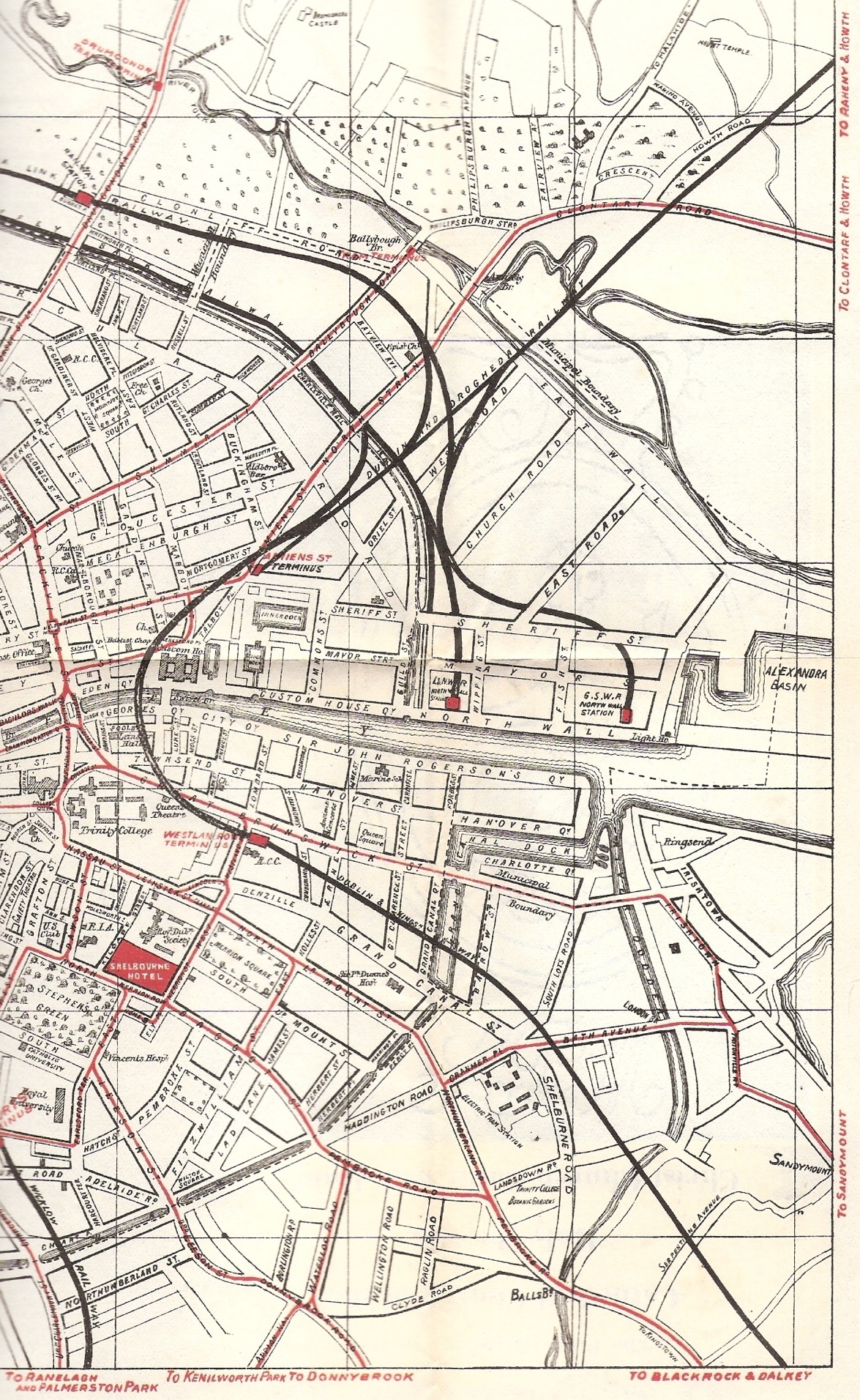 From a larger map of Dublin’s tramways, this subsection displays the Donnybrook tram route featured in “Two Gallants.” Dated 1912 on the back, this map was likely incorporated into a Dublin guidebook. (Click to zoom.)

In “Two Gallants,” the Donnybrook Tram(line) is mentioned twice. In both instances, the transportation route facilitates Corley’s duplicitous meetings with a woman.

In the first reference, Corley explains that after a chance meeting with a maid (or as he calls her, a “fine tart”) at Waterhouse’s clock, he made an “appointment” to meet her the following Sunday. Upon their meeting, they “went out to Donnybrook,” a suburb in South Dublin, where Corley takes “her into a field” to have sex (51). Not only does the maid bring Corley cigarettes and cigars that she steals from her employer, but she also “pay[s] the tram [fares] out and back” (51). In the second allusion, Lenehan follows Corley and the woman to Merrion Square and watches them “climbing the stairs of the Donnybrook tram” (56). From there, the couple travels to the end of the line to repeat their earlier sexual encounter.

Taking the Donnybrook Tram from crowded central Dublin to its more rural outskirts allows Corley and the maid to access a more intimate yet public space for intercourse. Even more, it permits Corley to further advance his plan of convincing the maid to steal more than luxury goods from her employer; rather, he aims to persuade her into taking the homeowners’ money.

As implied by the text, Corley’s philandering countryside adventures began long before his meetings with the maid. He confesses, “First I used to go with girls, you know…girls off the South Circular. I used to take them out, man, on the tram somewhere and pay the tram or take them to a band or a play at the theatre or buy them chocolate and sweets or something that way. I used to spend money on them right enough…” (52). Corley is absolutely gleeful, however, that in his latest relationship, he is the one on the receiving end. These sentiments support the opinions that Corley’s peers share about him—that he is a “gay Lothario” and “leech” (52, 50). He has a habit of stringing women along, both figuratively and literally, down Dublin’s tram tracks.

The Donnybrook Tramline that Corley and the maid utilize was established by the Dublin Tramways Co (DTC) in 1873. One of three rail companies servicing Dublin, the Donnybrook line “ran via Merrion Square (North and East), Lower Fitzwilliam Street, Baggot Street, Waterloo Road and Morehampton Road, to the terminus at Donnybrook, near the present bus garage.” James Kilroy notes that this line was known for its adoption of a “livery of ‘cream or pale yellow’” (19). 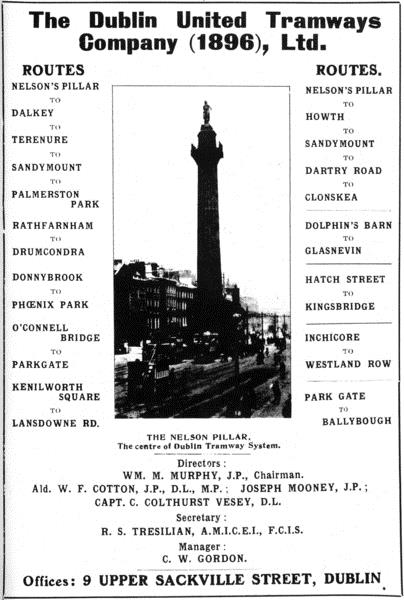 On January 1, 1881, Dublin’s three tram companies joined forces to form the Dublin United Tramways Co (DUTC), which offered about 32 miles of track and transported an astonishing estimate of around 10,000,000 passengers in its inaugural year (Kilroy 21). Indeed, in contrast to stereotypical assumptions of Dublin as a (technologically) backwards capital city, scholars such as Hugh Kenner and Andrew Thacker have claimed that by 1904, Dublin’s sophisticated and extensive tramways surpassed not just the rest of Europe, but perhaps even the rest of the modern world (Kenner 26, Thacker 127).

Because much of the population was illiterate, Dublin’s tramlines relied on symbols to distinguish the routes. The Donnybrook line via Merrion Square was recognized by two solid-blue conjoined diamonds (Figure 6). The north-bound end of the line was marked by the same symbol with a white “horizontal flash” passing through it (Kilroy 81). (Corley and the maid would have taken both these lines as they navigated to and from Donnybrook.) These symbols were phased out and eventually replaced by route numbers in the 1920s (Kilroy 84). Interestingly, Kilroy notes that although this system was one of a kind in Europe, it was implemented also in Egypt (84). 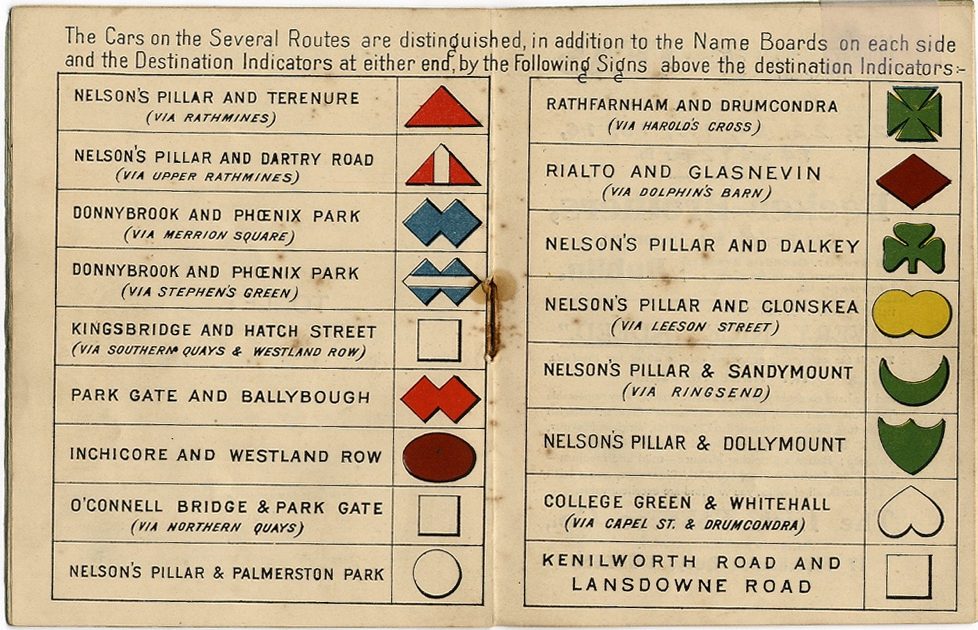 From the National Archives; Dublin Timetable, 1910.

As seen in the image below, the first tramcars were pulled down the tracks by horses. These same tracks were later used as Dublin’s trams gradually electrified between 1898 and January 1901 (Kilroy 83). In “Two Gallants,” Corley utilizes the DUTC’s electric (rather than horse-drawn) tramways, which would have been a relatively recent addition to Dublin’s transportation infrastructure. 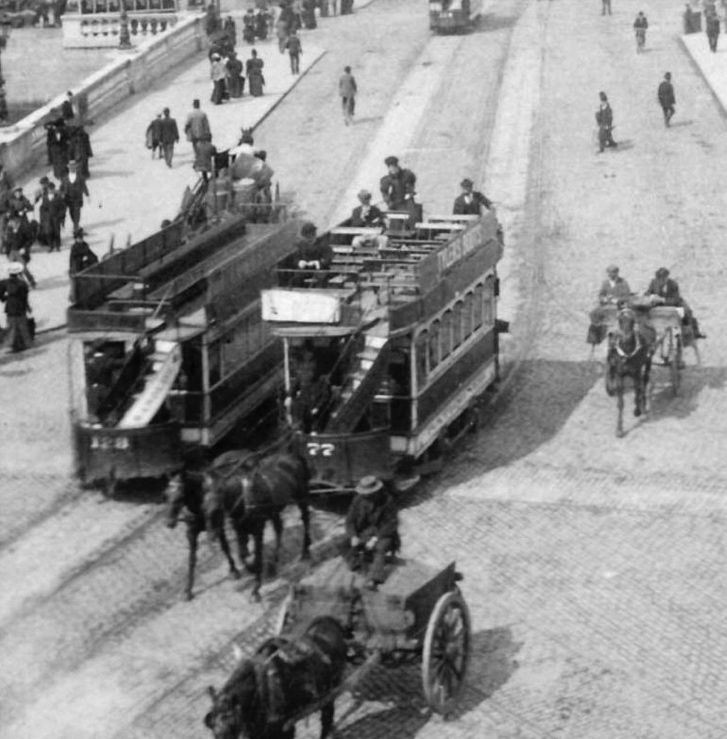