North Wall, the site of ships arriving and departing in Dublin, features in both “Eveline” and “A Little Cloud” as a place of frustrated dreams for their main characters. It’s where Eveline watches Frank set out for yet another adventure without her and where Little Chandler, eight years prior to the story’s setting, watches his friend Gallaher set off for a life he would come to envy. The place reference begins the story of “A Little Cloud” and begins the final movement of “Eveline:”

“Eight years before he had seen his friend off at the North Wall and wished him godspeed” (“ALC” 70).

“She stood among the swaying crowd in the station at the North Wall. He held her hand and she knew that he was speaking to her, saying something about the passage over and over again.” (“E” 40)

In both cases, the main characters are contrasted with someone who gets to leave, and the fact that they have stayed or must stay in Dublin is the source of their paralysis. Their Dublin responsibilities, while offering a certain level of comfort, are also their bindings. The North Wall, which offers some the chance to escape, is yet another unassailable boundary for the likes of Eveline and Little Chandler. 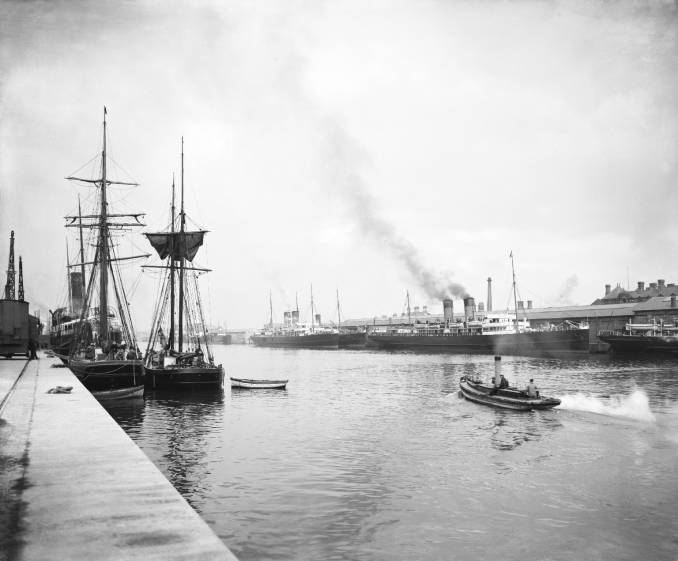 The National Railway Museum has digitized this photo from its collections with the following description: “Sailing ships and steam passenger ferries at North Wall docks, Dublin, about 1906.”

North Wall can refer to the general area north of the Liffey and east of the canal or the North Wall Quay which spans the north wall of the Liffey from the Custom House to East Wall. In the case of both stories, it would seem to refer to the docks from which ships sailed, which are indeed along the quay. The photo above is from the National Railway Museum and shows “[s]ailing ships and steam passenger ferries at North Wall docks, Dublin, about 1906.” Many of the ships that would dock here would take their passengers to Liverpool or Holyhead. From there, they could travel anywhere in the world.

One Response to North Wall