“After the Race” Route

By Jasmine Mulliken
Of all the stories in Dubliners, “After the Race” contains the longest route travelled by characters within a story. At approximately 17 kilometers (or about 10.5 miles), the route stretches from Naas Road, on the western outskirts of Dublin, all the way to the harbors in the sea at Kingstown. To cover such an expanse, the characters employ a variety of transportation methods, the most varied of all the stories in Dubliners. 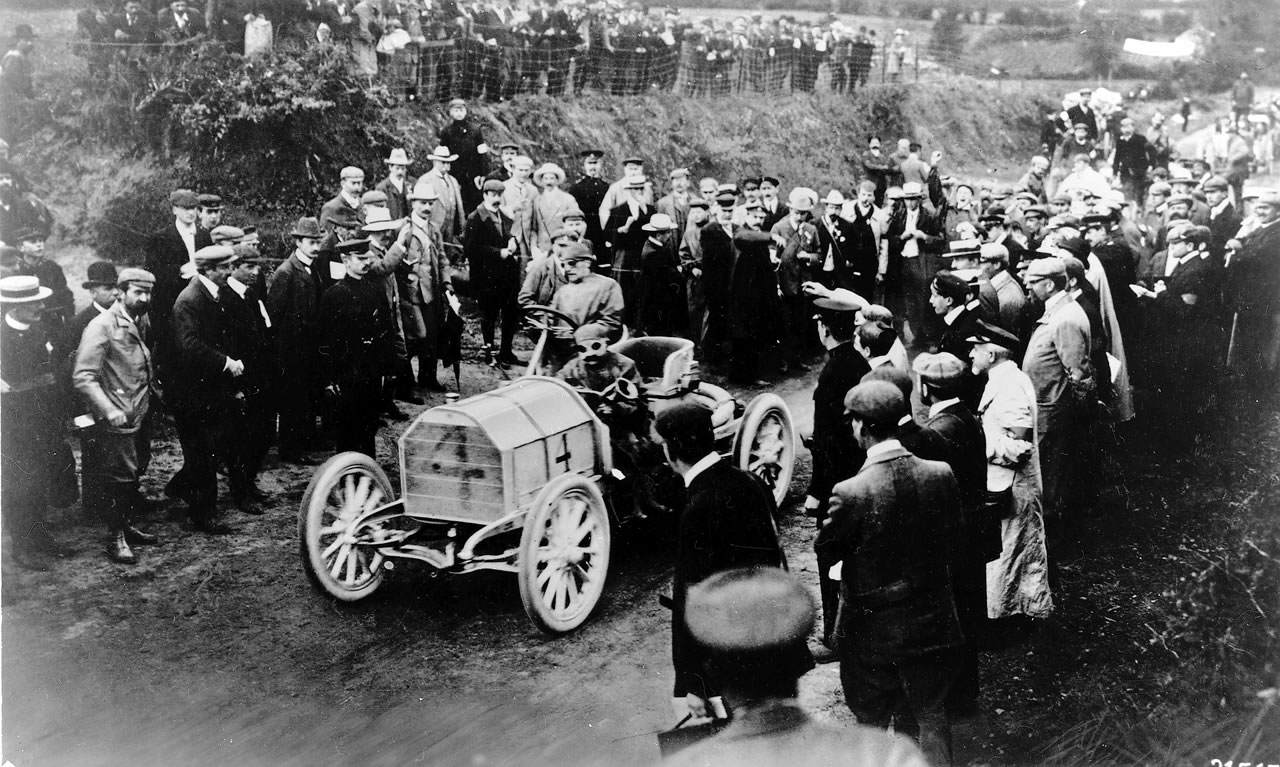 Camille Jenatzy at the 1903 Gordon Bennett cup race in Ireland

The story begins as the cars, from what we can surmise was the 1903 Gordon Bennet cup race,  “c[o]me scudding in towards Dublin, running evenly like pellets in the groove of the Naas Road” (42). The cars would have been, in that day, the newest, fastest, most advanced automobiles yet created. These machines “scudding” into the city set the fututristic tone of the story, whose descriptions, in many places, echo Marinetti’s Futurist Manifesto.

Once the cars approach the bank, Jimmy Doyle and Villona, who have been perched on their French friend’s car, hop off and walk up to Jimmy’s house to change for dinner. The men meet up again and eat at the hotel in which Segouin and Riviere are staying. Afterwards, the four men and their English companion walk along Stephen’s Green, and, running into Farley, the American, they hop on another car and head for Westland Row station. They board a train, and, “in a few seconds, as it seemed to Jimmy, they were walking out of Kingstown Station…It was a serene summer night; the harbour lay like a darkened mirror at their feet…They got into a rowboat at the slip and made out for the American’s yacht” (47). By way of car, foot, car, train, rowboat, and yacht, these energetic youth cover a lot of Dublin ground. Unlike Gabriel and Gretta in “The Dead,” who, though they live only minutes away from Kingstown, take a cab to a hotel near their aunts’ house rather than make the long trek to Monkstown after the party, the young men of “After the Race,” with access to the newest and fastest modes of transportation, see nothing whatsoever daunting about a “few seconds” jaunt down to Kingstown for the sake of extending the party. Still, the vain and material isolation Jimmy Doyle feels at the end of the story is akin to that of the “Araby” narrator who also, with high hopes for the evening and the future, takes a train and is left, at the end of the story, far from home and wondering if it was all worth it.

One Response to “After the Race” Route