Canal Bridge “After the Race” Route

Westland Row Station appears in two stories: “Araby” and “After the Race,” functioning as both a pass-through on and the beginning point for a train ride. In “Araby,” it’s referenced as a spot along the narrator’s route to the bazaar: “At Westland Row Station a crowd of people pressed to the carriage doors; but the porters moved them back, saying that it was a special train for the bazaar” (34). In “After the Race,” it’s where the young men board the train that will take them to Kingstown: “They took the train at Westland Row and in a few seconds, as it seemed to Jimmy, they were walking out of Kingstown Station” (47). 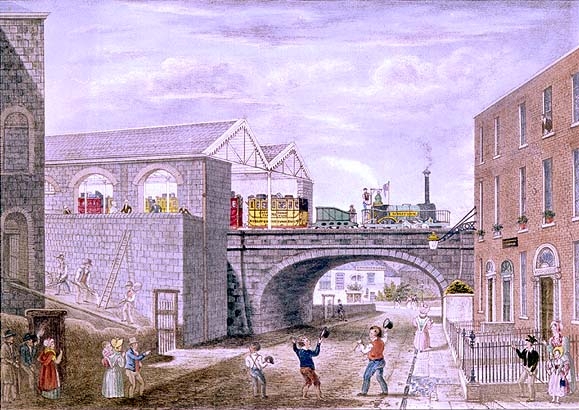 The station served as the terminus for the commuter line from Dublin to Kingstown and was built in 1834. The station is now called Pearse Station. The image to the right, from the National Library of Ireland, is a chromolithograph by J.D. Jones for Allan’s Publishing advertising the opening of the station. According to the “The History of the Dublin and Kingstown Railway,” the trains “were run on week days, every half hour, both ways from 9am until 5pm, while on Sundays trains ran every 20 minutes, with the exception of an interval from noon till 2pm. The single fare were 1s, 8d and 6d. for the three classes.”

Incidentally, two other stories include routes that would have been pretty nearly served by this rail line, but, perhaps due to the lack of stations adjacent to their destinations, the characters instead take trams. Maria in “Clay” takes a tram from Ballsbridge to Nelson’s Pillar and Farrington in “Counterparts” takes a tram from O’Connell Bridge to Shelbourne Road. The image below, a section of a Letts and Sons map from 1883, shows the rail line in red passing close to Shelbourne Road. A little further south we can see Ballsbridge. The blue line is the tram route, which obviously comes nearer to the precise locations Maria and Farrington need to access. It’s also worth noting that Gabriel and Gretta could have taken the train to Monkstown, but the trains would have long stopped running for the day by the time they left the Morkans’. Indeed, they don’t even arrive at the party until “long after 10 o’clock” (176). They most likely took a cab, and it would be an interesting investigation into modes of transportation of the day that would explore the reasons for all these characters’ choices of cab over tram or tram over train. 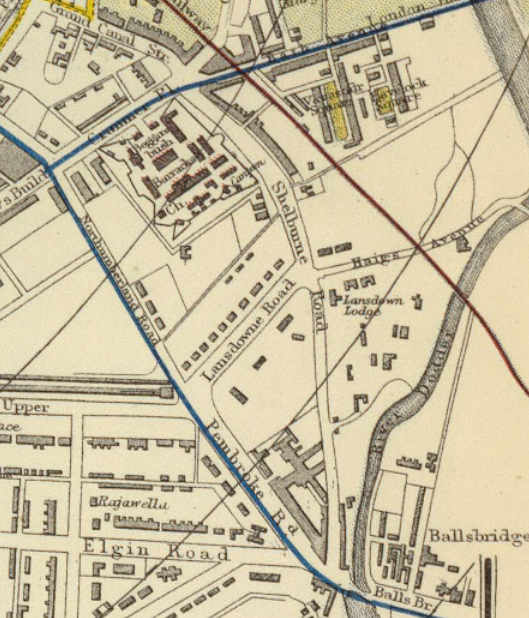