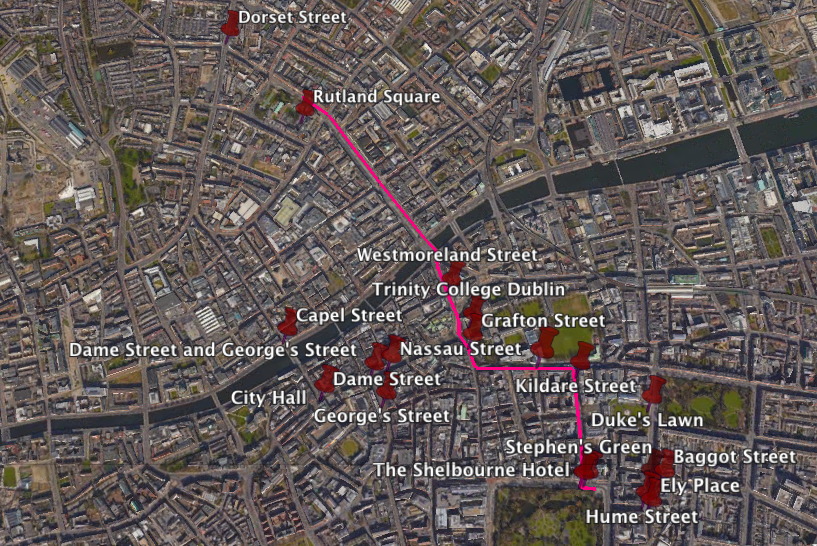 Screenshot of “Two Gallants” places on the Google Earth version of the map. Nassau Street is in the middle of the east-west portion of the path.

Nassau Street is referenced only once in Dubliners. It appears early in “Two Gallants” as one of the avenues Corley and Lenehan traverse on their way from a public house in Dorset Street, in the north part of the city, to the area of Stephen’s Green in the south, a journey of over 1.5 miles (2.5 km) that would take roughly 30 minutes to walk, according to the map. Nassau Street runs along the southern edge of Trinity College, connecting Grafton Street in the west and Kildare Street in the east. The young men’s path takes them past the gates of Trinity College (which face west), which they reach at “twenty after,” around the corner and along Nassau Street, and then into Kildare Street. 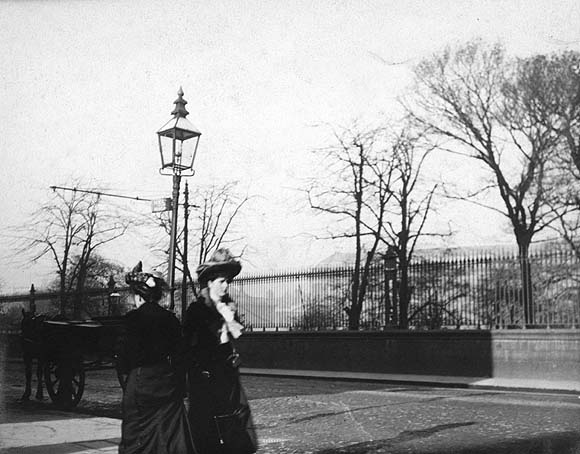 Two women walking in opposite directions, on Nassau Street, with Trinity’s railings in view. Photographed between 1890 and 1910 by J.J. Clarke. From the National Library of Ireland’s digitized Clarke Photographic Collection.

Although the pair have been talking and joking as they walk, by the time they reach this section of the trip, conversation meets resistance and then stops. Just after Lenehan notes the time from the clock above the college entrance, he questions Corley about whether he will be able to “pull it off all right,” referring to Corley’s looming task of meeting his girl and soliciting money from her, and Corley responds with agitation: “I’ll pull it off, he said. Leave it to me, can’t you?” (53) But “his brow was soon smooth again” and then, though they continue in silence, the text situates them on Nassau Street:

“They walked along Nassau Street and then turned into Kildare Street” (54).

The absence of conversation continues all along Kildare Street until they cross the street bordering Stephen’s Green and reach the park. 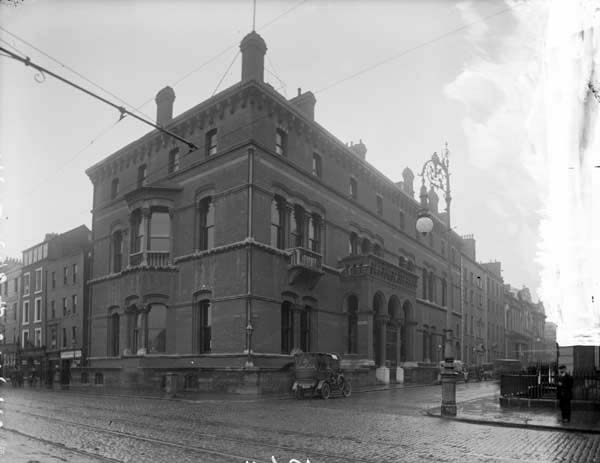 Nassau St, junction with Kildare St, Dublin. Photographed between 1880 and 1900 by Robert French, from the National Library of Ireland’s digitized Lawrence Collection.

Prior to the eighteenth century, Nassau Street was known as St. Patrick’s Well Lane. The name was a reference to a well that St. Patrick, a patron saint of Ireland, allegedly conjured up nearby on what is now the college grounds. As Frances A. Gerard explains in his Picturesque Dublin: Old and New, St. Patrick’s Well Lane was thus named because “here a miracle was performed by the great Irish saint, who, moved at the sufferings endured by the inhabitants from a dearth of fresh water (the Liffey being even then in bad repute), struck the earth with his staff in the name of the Lord, and on the spot a splendid fountain of purest water ran. This fountain was crowded on St. Patrick’s Day by water-drinkers” (164). The well, which dried up in 1729, according to Gerard, was “the subject of a poem written by Swift, in which he represents St. Patrick reproaching England: ‘Where is the holy well that bore my name? / Fled to the familiar brook from whence it came'” (165). The poem features the voice of St. Patrick revoking his patronage in response to what Swift saw as the demise of morality in Ireland.

The poem was written in 1726, at which time, according to Gerard, the street was yet to be renamed in honor of King William III of England and Ireland and of the Orange-Nassau House. C.T. M’Cready suggests the name Nassau Street was in use by 1756, 54 years after the end of William’s reign (77).Although Dutch Prince of Orange by birth, succeeding his father William II of Orange, he was also the son of King Charles’s daughter Mary and challenged James II of England for the crown during the Glorious Revolution. A Protestant, he led the ultimate defeat of James at the Battle of the Boyne. His statue stands, incidentally, just west of the entrance to Trinity College, and even though it isn’t directly mentioned in “Two Gallants,” it does appear in “The Dead” as the center of Gabriel’s story involving his grandfather’s (also named Patrick) apparently Orangist horse that can’t help but walk circles around old “King Billy” (D 208).

The Battle of the Boyne further entrenched the Protestant Ascendency, and many of the street names in Dublin reflect it. Although he does not note the street’s previous name, Donald Torchiana, who explores in detail the significance of street names in his “Joyce’s ‘Two Gallants’: A Walk through the Ascendancy,” alludes to the fairly obvious connotations of Nassau Street’s name by simply remarking “Nassau Street instantly recalls the Prince of Orange, who later presided over Ireland’s defeat at the Battle of the Boyne and perpetuated the broken Treaty of Limerick” (119).

Indeed, in a story so full of geographical references, explicit and implied, political and historical, there seems to be much still to unpack. For example, is there a reason Joyce has his gallants fall silent at the approximate moment they pass what would have once been St. Patrick’s Well on a street whose name has been changed to commemorate a Dutch-English conquerer? Is it important that this silence continues as they turn into and walk along Kildare Street, where a harpist plays “Silent, O Moyle,” a song whose lines include “Yet still in her darkness doth Erin lie sleeping, /Still doth the pure light its dawning delay. / When will that day-star, mildly springing, /
Warm our isle with peace and love?”

To add a further layer of intrigue to the street’s reference, a James Joyce Centre “On This Day” post recalls the well-known fact that on June 10, 1904 Joyce met the woman he would spend his life with on Nassau Street. Whether he saw Nora Barnacle clearly or sketchily (a subject the post examines briefly), he was inspired to speak to her. He struck up a conversation with Nora and the two agreed to meet for a proper date. That date would, of course, eventually be commemorated in Ulysses, which takes place entirely in that one day, June 16, 1904, a day now widely known and celebrated as Bloomsday.