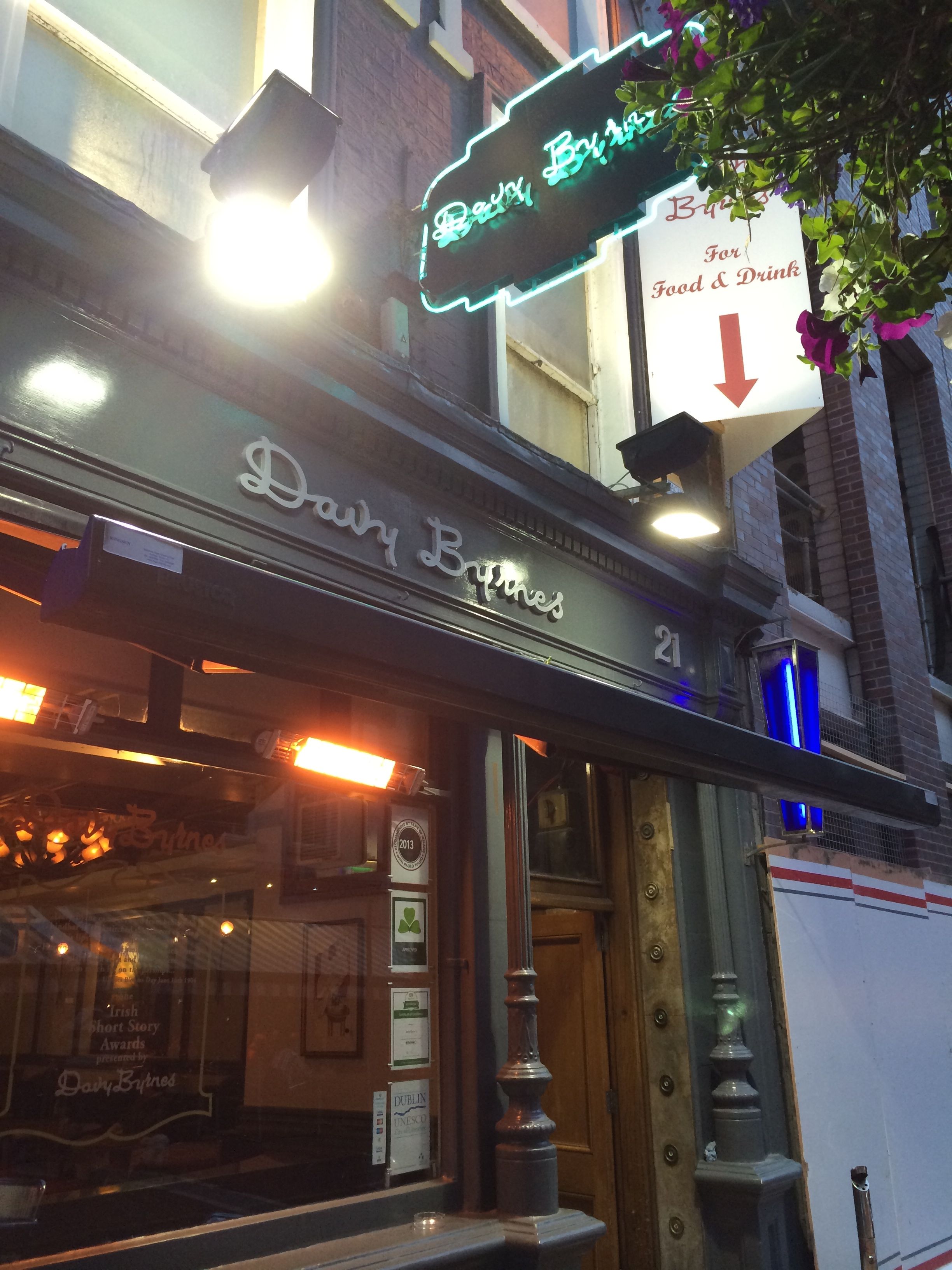 Most Joyce enthusiasts, and even  many non-enthusiasts, recognize Davy Byrne’s as the place where Bloom ate a cheese sandwich and drank a glass of burgundy in Ulysses. Many a Bloomsday pilgrim has stopped into the pub over the years to experience a moment in the life of Leopold Bloom, and literary pub crawls  (including the excellent one I experienced in the summer of 2014, linked) highlight the premises as a staple in Dublin’s literary scene. Perhaps less noted is the pub’s appearance in Dubliners. It appears only once, and briefly, but it resonates in Joyce’s weblike world as an intersection of person, place, and theme.

In Dubliners, specifically “Counterparts,” it’s the first pub Farrington hits after his exchange with Mr. Alleyne, and the first time he embellishes the story of that exchange to his drinking fellows:

“–So, I just looked at him—coolly, you know, and looked at her. Then I looked back at him again—taking my time, you know. I don’t think that that’s a fair question to put to me, says I.

Nosey Flynn was sitting up in his usual corner of Davy Byrne’s and, when he heard the story, he stood Farrington a half-one, saying it was as smart a thing as ever he heard. Farrington stood a drink in his turn.” (93)

In reality, the incident with Mr. Alleyne leaves Farrington much demeaned, but as the night goes on, and Farrington tells his story to a wider audience,  he increasingly paints himself as the verbal victor over his boss and a hero for all working class Bartlebies tired of taking orders. 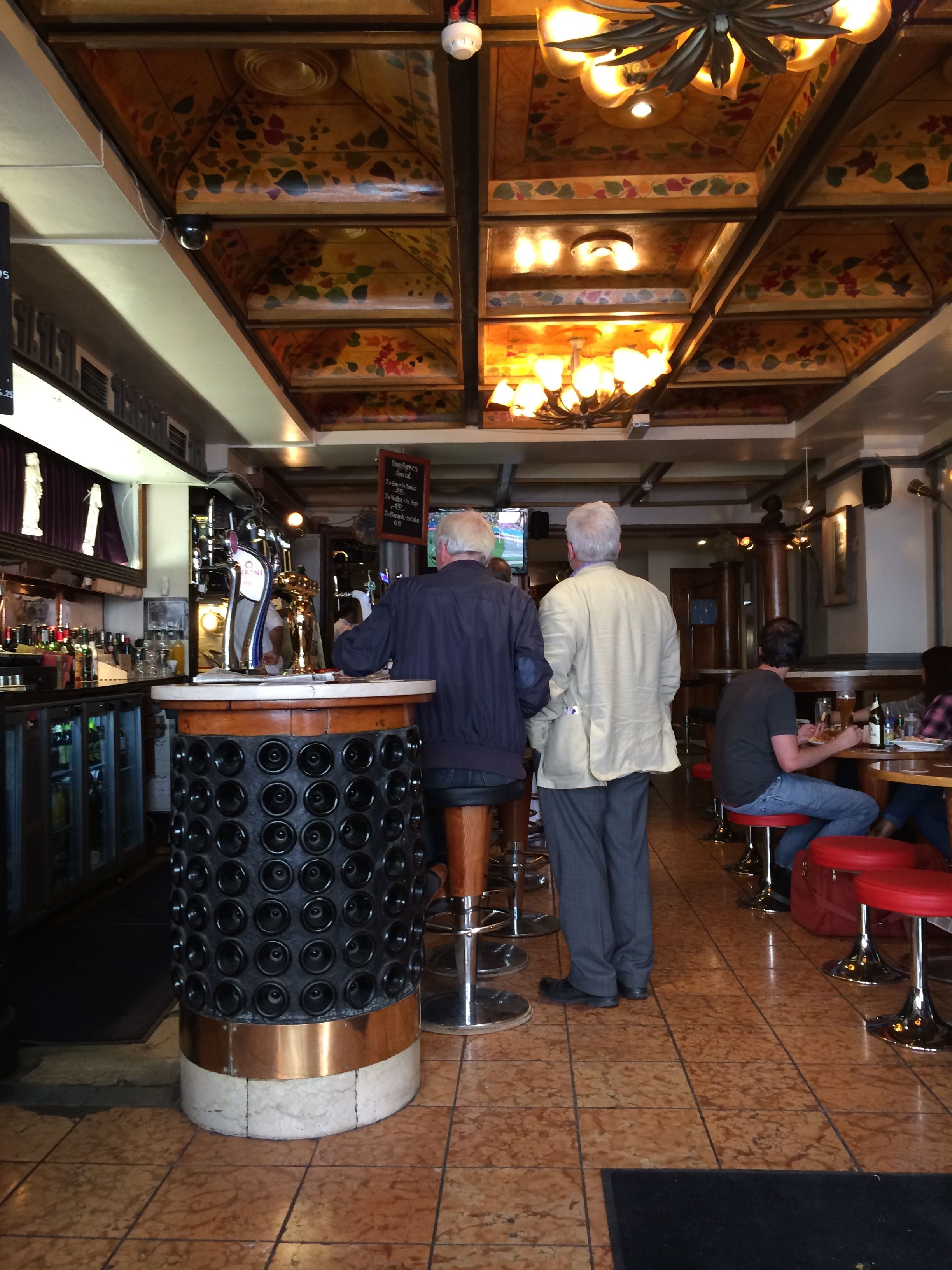 Interior of Davy Byrne’s as photographed by the author, 30 June 2014.

Now “Dublin’s most famous [gastro]pub,” Davy Byrne’s was established in 1889. According to the history on the pub’s website, before Byrne opened the doors to his own business, he was manager at the Scotch House, another pub that Farrington and his crew visit during the course of the story. It’s at the Scotch House that Farrington meets Weathers, the artiste who eventually beats him at arm wrestling and ruins his night. 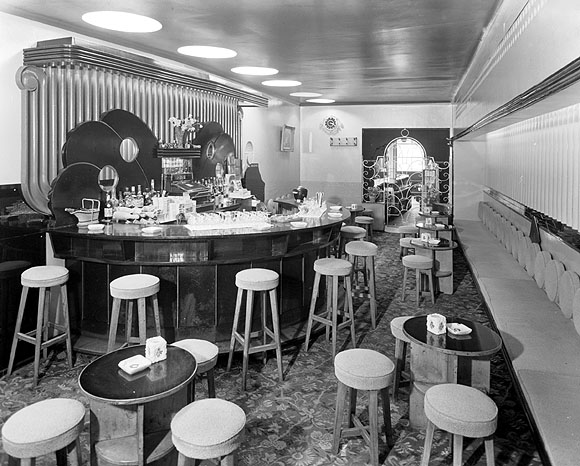 Interior of Davy Byrnes, photographed between 1930 and 1950. From the Valentine Photographic Collection at the National Library of Ireland.

But early in the evening, before Farrington spends all his money and begins his downward spiral, he has a drink at Davy Byrne’s, courtesy of Nosey Flynn, who also appears at this locale in Ulysses. In fact, as soon as Bloom enters the “moral pub” (8.732), Nosey Flynn, apparently at work, greets him and takes his order: a glass of burgundy and a cheese sandwich. After some conversation between the two, Davy Byrne himself comes in “from the hindbar in tuckstitched shirtsleeves, cleaning his lips with two wipes of his napkin. Herring’s blush. Whose smile upon each feature plays with such and such replete. Too much fat on the parsnips” (8. 809-12). Bloom studies the counter as Byrne and Flynn talk: “Nice quiet bar. Nice piece of wood in that counter. Nicely planed. Like the way it curves there” (8.822-23). 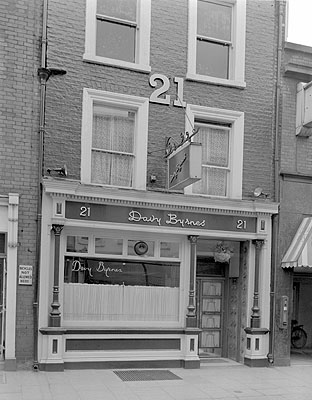 Exterior of Davy Byrne’s, as photographed between 1930 and 1950. From the Valentine Photographic Collection at the National Library of Ireland.

Another common figure to both stories is Paddy Leonard, who enters the scene once the main characters have already begun eating and/or drinking. In “Counterparts,” Leonard comes in with O’Halloran, and in Ulysses, he comes in with Bantam Lyons and Tom Rochford shortly before Bloom leaves.

According to the pub’s online history, fictional characters aren’t the only common links in Joyce’s Davy-Byrne’s web. Apparently, the rooms above the pub were once leased to another person named James Joyce, a fact that, as the history points out, “Joyce the author may well have been aware of when famously alluding to Davy Byrnes…This ironic detail would not have been lost on the writer, famous for carefully researching all premises and addresses used in his writings.” Thus, it might be also worth noting the implications this irony seems to highlight. Though it’s endlessly intriguing to explore the various connections between characters and places across Joyce’s works, might it also be possible that Ulysses Nosey Flynn and “Counterparts” Nosey Flynn are two completely different people?