St. George’s Church appears in “The Boarding House” through the sound of its bells pealing. The sound marks the time (just after 11 on a Sunday morning) as well as the location of the boarding house where Mrs. Mooney sits conspiring to collect her “reparations” from Bob Doran who has been carrying on an affair with her daughter Polly:

“The belfry of George’s Church sent out constant peals and worshippers, singly or in groups, traversed the little circus before the church, revealing their purpose by their self-contained demeanour no less than by the little volumes in their gloved hands” (63).

As the bells ring, Mrs. Mooney watches the maid clean up the remains of breakfast and thinks about the conversation she had had the night before with her daughter concerning the affair. Several minutes pass until:

“Mrs. Mooney glanced instinctively at the little gilt clock on the mantelpiece as soon as she had become aware through her revery that the bells of George’s Church had stopped ringing. It was seventeen minutes past eleven: she would have lots of time to have the matter out with Mr. Doran and then catch short twelve at Marlborough Street.” (64). 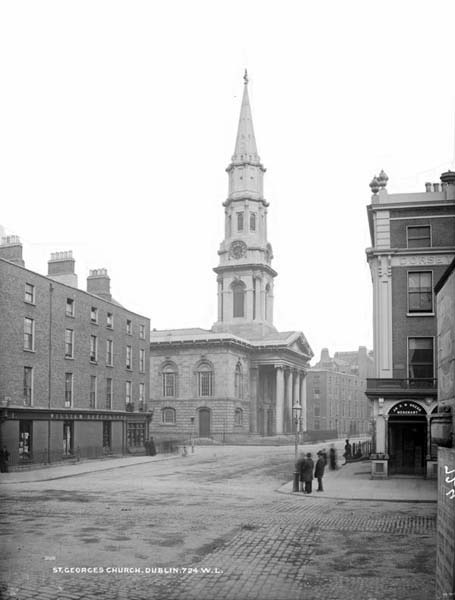 St. George’s Church, Dublin. Photograph by Robert French, published between 1880 and 1900, is part of the Lawrence Photograph Collection, available online through the National Library of Ireland.

Even though St. George’s is just steps away from the boarding house in Hardwicke Street, because she is Catholic, Mrs. Mooney intends to walk south and east 11 minutes to St. Mary’s Pro-Cathedral in Marlborough Street for the shortest mass of the day. St. George’s, located at the top of Hardwicke Street, belonged to the Church of Ireland. The juxtaposition of these two denominations in such short textual proximity creates, on one hand, a kind tension between  the religious values and doctrines of each church. For instance, divorce is forbidden by the Catholic church, but Mrs. Mooney, a Catholic, has already herself “gone to the priest and got a separation from [her husband] with care of the children” (61). Bob Doran, too, is confined by his association with the Catholic Church in that his confession to the priest the night before had put him in a state of acceptance for the imminent reparations he must make by marrying Polly. Additionally, his job in a Catholic wine merchant’s office is jeopardized by his sinful state, creating even more pressure for him to atone for his sins by getting married. If either of these characters were Protestant, not only could they more conveniently gain or retain their independence, they wold have a shorter walk to church on Sunday. The bells pealing behind Mrs. Mooney’s anxious plotting and Bob Doran’s regrets and self-doubt seem almost like a loud and clear, yet ultimately ignored, wake-up call.

On the other hand, the Church of Ireland and the Catholic Church are both set up against the notion of secularism and even atheism. Before facing Mrs. Mooney, Bob Doran recalls his youthful days  when he “boasted of his free-thinking and denied the existence of God to his companions in public- houses” (66). Meanwhile, Mrs. Mooney is called a “Madam” and encourages, by omission of discouragement, her daughter to have “the run of the young men” (63) at the boarding house, which “was beginning to get a certain fame” (66).

As a structure and a dwelling, St. George’s has historically been perhaps as shaky as any religious doctrine the characters of “The Boarding House” might espouse. According to a 2009 Irish Times article, “[e]ven while St George’s was a church, the building was put to other uses and once had a bonded warehouse in the vaults in the cellar, which the congregation found somewhat hard to stomach.” The church was built between 1802 and 1814, and since then has undergone many changes. According to the same article, “the church became well known for an addition 22 years after it was built when that wide roof began to splay further than it should, due to the strain of the wide-span timber trusses. Civil engineer Robert Mallet, whose father ran an iron foundry, created cast-iron trusses to haul the church back into shape. Mallet knew about rocky foundations, being also an expert on earthquakes: he is credited with creating the word ‘seismology.'” Since Joyce’s day, the church has been a night club, a theatre, and an office building.

It’s also worth noting that the bells of St. George’s, as well as its steeple, also appear in Ulysses. Reciprocally, Bantam of Lyons of Ulysses makes a cameo in “The Boarding House” as another potential, though more difficult to acquire, suitor for Polly.

One Response to St. George’s